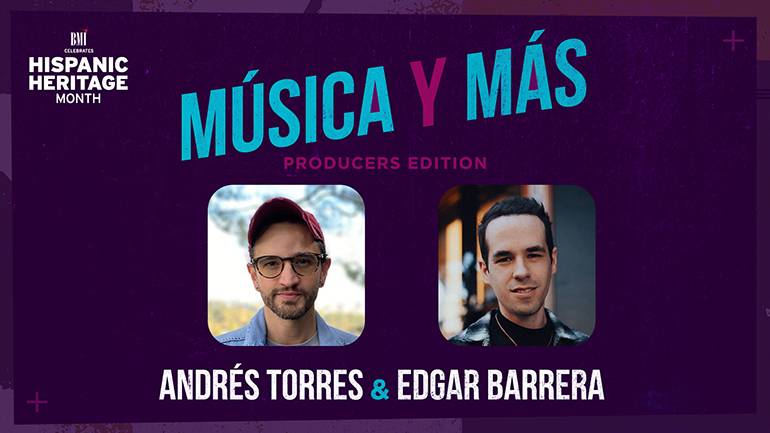 Edgar Barrera and Andrés Torres are both innovative music creators who are helping forge the direction of contemporary Latin music today and sharing its vibrance and influence on a global scale.

A versatile Colombian musician, songwriter and record producer, Torres rose through the ranks from a position as an assistant engineer to become one of the most successful and sought-after producers of his generation following his star-making turn producing the iconic 2017 single, “Despacito,” for Luis Fonsi, Daddy Yankee and Justin Bieber. His distinctive work has earned him four BMI Latin Awards, two Latin GRAMMY Awards and multiple nominations, and he has worked with an impressive roster of luminaries including David Bisbal, Alejandro Sanz, La Santa Cecilia, Sebastián Yatra Tini, Morat, Fonseca, Carlos Vives, Ricky Martin and many more. This year, Torres is nominated for both a Song of the Year Latin GRAMMY and Best Pop Song Latin GRAMMY for his work on “Cancion Bonita” by Carlos Vives and Ricky Martin.

Barrera is a Mexican American songwriter and prolific producer based in Miami who started out as an unpaid studio intern for Andrés Castro He’d been accepted to the prestigious Berklee College of Music, but honed his chops little by little, working with Castro, until he was off and running without ever attending the school. In short order, Barrera’s persistency and hard work turned him into the consummate songwriter and producer. He has since gone on to write and produce for names like Ariana Grande, Madonna, Shakira, Maluma, Luis Coronel, Camilo, Christian Nodal, Carols Vives, Daddy Yankee, Jennifer Lopez, CNCO, Yandel, Price Royce, Sebastián Yatra and many more. He has won 14 BMI Latin Awards and one BMI Pop Award.  He was the writer of the 2019 Regional Mexican Song of the Year, “No Te Contaron Mal” and 2020 Regional Mexican Song of the Year, “De Los Besos Que Te Di.” He has so far won one GRAMMY award, 14 Latin GRAMMY awards and multiple nominations. For this year’s Latin GRAMMY Awards, Barrera has been nominated for eight, including Record of The Year, Producer of The Year, Album of The Year, and two each for Best Regional Song and Song of The Year.

In honor of Hispanic Heritage Month, BMI reached out to Torres and Barrera to showcase a conversation between two of the most influential music creators in Latin music today. Longtime friends as well as frequent collaborators, Torres and Barrera had a great exchange about their beginnings, their passion for making music, their creative processes and their Latin heritage. Don’t miss it!