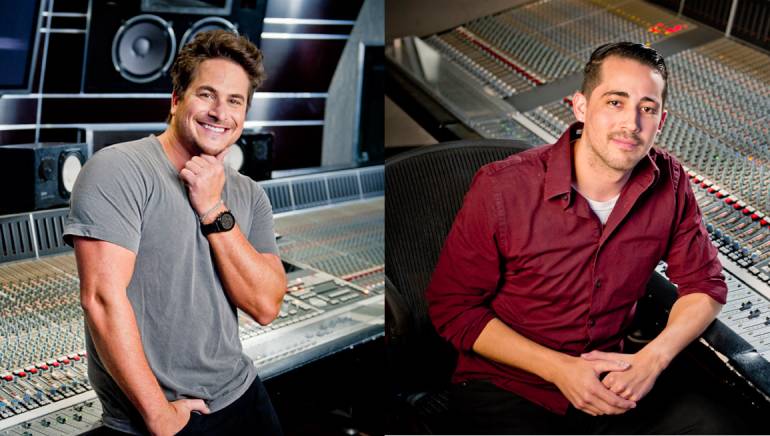 BMI affiliates Adam Malka and Jaime Villalvazo are the co-founder and music supervisor of top-shelf music production company Signature Tracks, which provides viable custom tracks for network giants including MTV, ABC and CNBC. The innovative company’s credits include adding just the right musical touch to blockbuster shows such as Keeping Up With the Kardashians and The Bachelorette, as well as many other productions that are looking for a fresh sound and an easy way to find it.

Organized by genres and moods specifically designed to create a seamless experience for all users, the library provides scores that are each unique in their own way, holding true to the company’s mission to provide music that is anything but boring. And who better to do that than a team of music moguls whose musical efforts have also been recognized as a go-to for huge artists like Jay-Z, Chris Brown, Lil Wayne, Miley Cyrus, Seal and Trapt, to name a few?

BMI caught up with Malka and Villalvazo to ask about their tracks and how they’re more than staying in the race with other top music libraries. Here’s what they had to say.

Tell us a bit about Signature Tracks. How did each of you get involved?

AM: Before starting Signature Tracks, I produced music with my business partner and childhood friend Russell William Howard for artists in Babyface’s writing camp at Edmonds Entertainment. I also had the opportunity to produce for the rock band Trapt and pitch songs to many artists including a co-write on a song for Seal. This was during the time reality TV was starting to hit big but still many believed it would be short lived and the fad of unscripted TV would go away. My other best friend, David Lasman, worked his way up to become a co-executive producer in TV and in 2008, asked me to start a company that would provide music for TV above and beyond what was available to productions at the time. We set out to start a company utilizing well-known talented producers from the music label side to push the sounds for TV, and Signature Tracks was started almost ten years ago.

JV: I was first introduced to co-founder Russell William Howard through a mutual friend. I was pursuing a career as a hip-hop artist and Russell gave me the opportunity to be a featured rapper on one of his projects. He later became responsible for influencing me to become a music composer and I will forever be grateful to him for that. He challenged a kid, who, at the time, knew nothing about music production, to find a way to get a computer and a midi keyboard to study and listen to specific shows on television, understand why the music on those shows were working, and then to go home and write my own cues in those vibes, so I could come back in a few months to show him my progress. I stayed persistent and eventually, I was introduced to co-founders Adam Malka and David Lasman, who officially gave me the opportunity to become Signature Tracks’ first employee.

Jaime, what does your role as music supervisor, as opposed to composer, involve?

JV: Composing and music supervision are very closely related, in that, your objective is to try to sculpt a sound that embodies your client’s creative vision. As a music supervisor, you play more of a management role, where your responsibilities are to know the strengths of your team so you can delegate requests to the best composers, to understand the sound pallet of various television networks and to curate music playlists for production companies so their editors can work as efficiently as possible.

Being a composer myself, this often allows me to bridge the gap of communication between producers and our writers. Music can be very objective and difficult to describe for a lot of people, so it’s very helpful for me to be able to write creative briefs that our composers can relate to and get excited about so they can hone in and create a sound that our clients will be happy with.

Adam, as co-founder of Signature Tracks, how does having written and produced a band help you in your role?

AM: My experience writing and producing for artists and bands helps me in everything I do today. It taught me how to use a creative language and to make sure everyone is happy, from our clients to our extensive team of incredible music producers. Often my role as our Co-CEO involves dealing directly with executive producers, networks and others involved in the production process to translate their creative vision with a unique score for each project. We strive to achieve excellence and my ear along with Jaime’s are often the screener to what is approved and accepted. We have a tireless process of revising lyrics and tracks to perfection for our clients. Our songs for TV sound like what you hear on the radio. We use major labor music producers and up and coming artists that have momentum in the industry. Recently we began working on our second season of Siesta Keys. Last season we created 45 full songs for this series from about ten different artists. We are very excited about this next season as we are creating songs to brand the sound of the show. In 2018 all our songs will be available to stream on Spotify, Apple Music, and other digital media under our new label Signature Records.

What exactly is the role of a music library? Do you pitch material or do film/TV directors/producers come to you?

AM: Our music library consists of about 30,000 original exclusive tracks broken out in ten main genres and 70 sub-genres. Every track is tagged, keyworded and available online for our clients, and most often we are curating selects for our projects to assist edit in ramping up a project quickly. Humbly speaking, I have the reputation of a human Pandora, and I can quickly pair down our catalogue into a cohesive consistent sound to match the project we are working on. Typically, our projects use about 75% of our library within an entire series for all the underscore, and our custom music will serve the rest of the show to uniquely brand a series and assist in all production requests. For example, on The Real Housewives of Orange County, we will create approximately 50 original cues all with sub mixes totaling 200 usable tracks and our freshest latest library cues will fill out the remainder of the series. We’re pitching our clients all day long making sure we send them the latest music and sounds. For example, on a soon-to-be new Bravo series we’re pitching the executive producer unique sounds; a blend of Caribbean reggaeton infused with Kygo sounds mixed with house beats for b-roll/montage/transition cues, and ‘80s synth stabs under hip hop percussion for the comedy and tasking underscore. I don’t want to give away too many secrets, but we’re always pushing for a sound that will take a project to the next level. How can we create something that has never been done before while keeping the network happy and making sure the scenes of each show are excited and driven by fresh sounds is our priority.

What musical or production tips would you give a composer trying to pitch their material for film and TV today?

AM: Find a way to infuse really fresh sounds inspired by what’s currently popular into unique underscore to stand out. Producers of shows are often asking for what’s popular out there, so find a way to incorporate that in your sounds.

What business tips would you give?

AM: I always say the same thing whether speaking with a new composer out of Berkeley or at UCLA: Number 1 - Make yourself very easy to work with and Number 2 - Be likeable. People want to work with people they like in this industry and people that make it super easy to work with. Also, be prepared to pay your dues. Internships are a great way to get in the door as well. It was necessary for me as I remember several internships opened up my eyes to what I was interested in doing and what I didn’t want to do. It also gave me the experience to really appreciate what I’m doing now and what an incredible opportunity it is to do what you love for a living. I’m so appreciative for the people that gave me an opportunity to place my music first and encouraged me. I’d like to shout out my mentor Brent Kidwell for placing my first track in a TV show, as well as Matt Duclos, an incredible post producer who gave our company a break on our music major network show. Thank you so much!!

What is the process for completing a project? Does everybody have a hand in the final product or is it up to each composer working on the project to deliver it?

AM: We’re very specific with deliverables. As we’re working about over 75 to 100 unique projects at a time, we maintain a very tight schedule with our team. Deadlines are demanding. It’s not unusual to receive a request and deliver a track within hours to our clients. Quality is essential, as our senior producers have spent 15 to 20 years in this game, while some of our freshest talents have 10+ years experience writing for top artists before composing for TV with Signature Tracks.