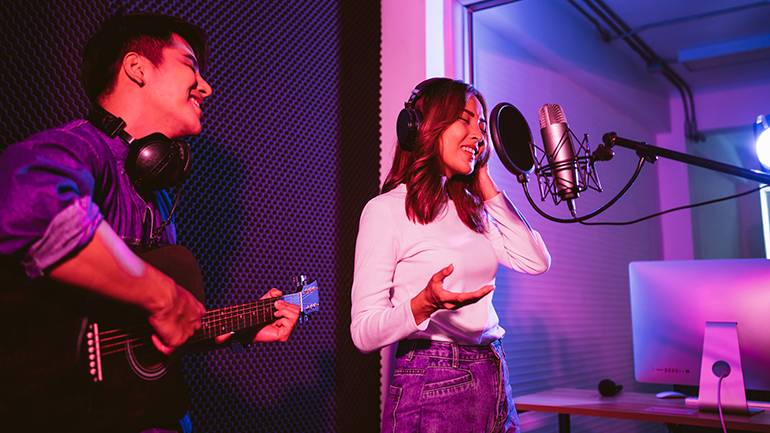 No matter how long you’ve been at it, understanding the recording process is really a lifelong journey, thanks to the seemingly endless list of techniques you can employ during any given session. Here we review some of these random strategies, from working with click tracks to getting a fuller sound out of a teeny room, and more.

Click tricks. Using an automated percussion device—a.k.a. “click track”— remains a source of controversy for some musicians who dislike being confined to a locked-in beat. Still, having a reliable tempo throughout can be undeniably useful, particularly when it comes to making edits after the fact. Certain robo rhythms are more appealing than others—for instance, I recently ran a guitar through a tremolo pedal with the speed and rate set to the desired tempo of the song, which not only provided a solid backbeat but served as an effect as well.

New strings or not? Guitarists are familiar with the drill—for optimal sound, tone and intonation, a regular string-changing regimen is a must. But do you swap them out right before you start recording? While newer strings are mandatory for most folks when performing live, sometimes a slightly worn-in set is better for studio work, especially when you want more of a “blended” sound (such as an acoustic guitar in a rock rhythm section). Additionally, strings that weren’t changed that morning are less likely to slip during that evening’s tracking session.

Listen first, mic it second. While rushing to get a good idea recorded, it’s easy to forget one of the main tenets of recording—to get all of your sounds down before you start wiring up microphones. While it requires a bit more patience, spend some time dialing in the right tones on your instrument amplifiers, ensuring drums and other percussion instruments are properly tuned and/or damped down, finding the best spot in the room for cutting vocals, and so forth. Never settle for an inferior-sounding signal, thinking you can just fix it with some processing later on.

All for one. The soloing function on your recorder allows you to instantly isolate any one track so you can hear how it sounds on its own. Though certainly useful, it can also create unintended problems for people who forget that a good mix is about the sum of the parts, rather than what each part is doing by itself. I’ve erased guitar parts that sounded awesome on their own but for whatever reason just wouldn’t blend with everything else; conversely, I once soloed a floor tom that turned out to be badly distorted, yet still felt wonderful in the main mix.

To damp it down—or not. Studio acoustics are often a study in opposites—on the one hand we might attach sound-absorbing material to the area around our mixing desk in order to prevent unwanted room echoes from getting between the speakers and our ears. By comparison, there are times you might find it preferable to encourage liveliness, such as when recording acoustic guitar, piano or vocals. Even yours is a small space that’s completely carpeted, you can alleviate dryness by simply placing a sheet of plywood or some pine paneling on the floor directly below your recording position—rather than absorbing the sound, the wood offers enough reflection to give the instrument or voice a noticeably fuller tone.