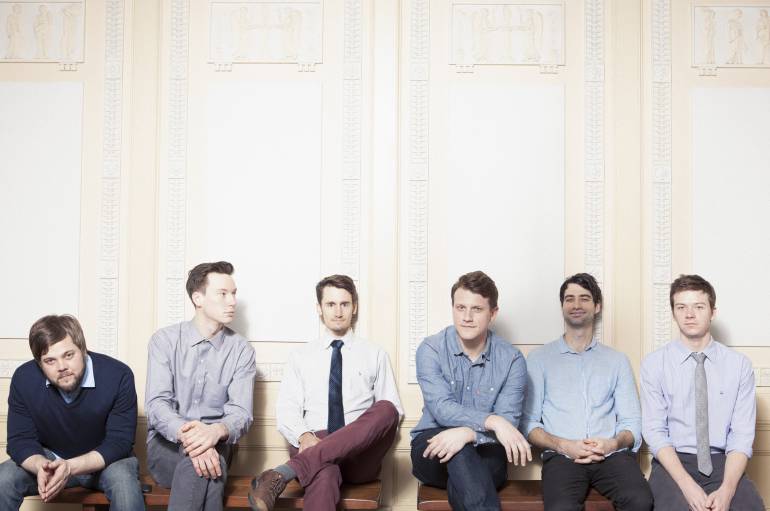 When one hears the words “Seattle band,” there’s a certain image that comes to mind - and it usually involves something out Cameron Crowe’s grunge-loving ‘90s film, Singles. But Hey Marseilles doesn’t exactly fit into that cliche. The six-piece band - made up of Matt Bishop on lead vocals and guitar; Nick Ward on guitar, drumbourine and mandolin; Philip Kobernik on accordion and piano; Samuel Anderson on cello; Jacob Anderson on viola and Colin Richey on drums - calls its sound “folkestral,” a fitting description, when one considers the number of instruments they use daily. It’s those classical instruments that give their live shows a memorable quality that separates them from other folk-pop acts out there. “We’re not reinventing the wheel when it comes to trying to make music that’s appealing to a wide variety of folks, but we are always trying to put our own unique imprint on it through the use of those classical or orchestral elements,” says Bishop, chatting with BMI from his tour bus.

The story of the band dates back to 2006, at the University of Washington, when Ward and Bishop met while playing shows and then started added members to the band. As for the name, Bishop explains the origins: “The name was really just a product of the fact that we like rhymes and it seemed like something cool and interesting, which people wouldn’t necessarily know how to say or spell.” Nowadays, outside of the United States, the band has fans in Germany and France, even if Bishop likes to joke that the amount of French followers that the band has on social media is more a product of “people mixing up our name with tourist organizations in Marseilles.”

The band’s sophomore album, Lines We Trace, was released in March 2013 to critical acclaim. Songs like the second single “Heart Beats” showcase the band’s growth. In fact, nothing can explain the band’s collaborative process better than this YouTube video, titled “Hey Marseilles Makes An Album.”  Not that the songs on their 2008 debut album,  To Travels & Trunks, were any less memorable. On the confessional “Rio,” for instance, Bishop sings of an ex-girlfriend who ended up moving to Brazil and working at an orphanage. Now the band has fans in South America, in addition to Europe.

Lines We Trace continues to gain traction, as proven by Hey Marseilles’ constant gigging in 2013. The band just kicked off their summer tour on June 21 at the Firefly Music Festival in Delaware and they’ll stay steady on the road until August 2, when they’ll rock the BMI Lollapalooza stage in Chicago. Bishop calls the latter the most renowned festival they’ve played to date. “My favorite part about touring,” he says, “is presenting this thing that is so personal to who you are and something that you’ve worked on with so much energy and time and passion and to have other people whom you’ve never met, night after night, connect to it - that indicates some sort of appreciation for that and that’s really fulfilling.”

While on the road, Bishop says he hopes to educate audiences on the diversity of the Seattle music scene. “I do get a lot of questions about grunge,” he says. “It seems that people are stuck in that perception sometimes and for good reason - maybe they don’t necessarily know that Modest Mouse, Band of Horses, [BMI member] Macklemore or the Heavy Hearts are from Seattle, too, so I try to do my duty by telling people that.” But nothing can tell that story better than Hey Marseilles’ music.