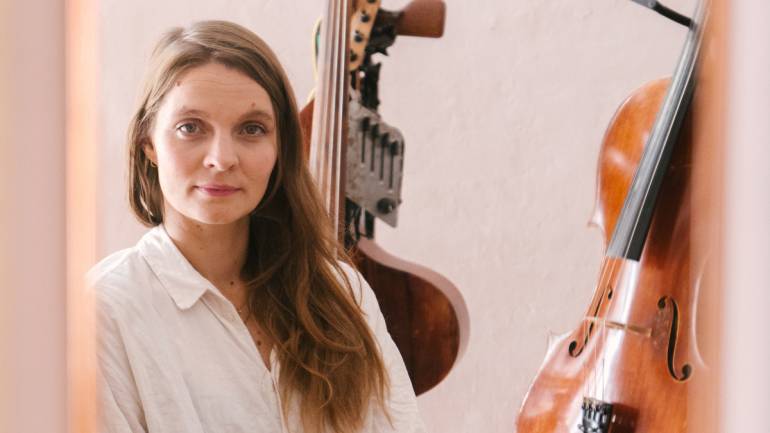 Icelandic composer Hildur Guðnadóttir is on a winning streak – first an Emmy, and now a World Soundtrack Award as Best TV Composer for her work on the critically acclaimed HBO series Chernobyl. She has composed music for theatre, dance and films and has been commissioned for new works by the Icelandic Symphony Orchestra, Icelandic National Theatre, Tate Modern, the British Film Institute, the Royal Swedish Opera in Stockholm and Gothenburg National Theatre. Also on her extensive resume is a nomination in 2014 for the Nordic Music Council Prize as Composer of the Year. In 2018, she was nominated for a Discovery of the Year Award at the WSA and received several prestigious awards, including the Asia Pacific Screen Award for Best Score for Mary Magdalene and Best Score at the Beijing International Film Festival for Journey’s End.

And what does she do in her spare time? The cello player and singer has been immersing herself in experimental pop and contemporary music with four albums that have been nominated multiple times for Icelandic Music Awards. Now she’s set her sights on her score for Joker, which opened #1 at the box office earlier this month.

Despite all of this exciting chaos, BMI caught up with Guðnadóttir to ask her a few questions about her ride to success. Read on…

You wrote a lot of the Joker score before filming. How did you imagine the scenes and know where you wanted the music to go without having a visual reference?

[filmmaker] Todd [Phillips] sent me a copy of the script right after he finished writing it and asked me to send over some music based on my initial reactions. He didn’t give me any instructions but just wanted to hear my response. So, I wrote music from this initial reading and the feeling I got from it, imagining the sound and pacing of the narrative. Todd really resonated with this music and ended up shooting a large amount of the scenes with it as a background. This really allowed the film and the music to grow together as a whole.

Writing directly from the script allowed me to not be influenced by the costumes, edits or choreography, it’s really good to be able to connect with the film on a basic level. When I sat down with my cello to create the music for Arthur, I just let the instrument find the way into the character, into his voice and into his head. I just held on to the feeling I had after reading the script, as soon as I started to play it was like a lightning bolt, I got a really strong physical reaction that this was Arthur’s music.

What parts of the score were the easiest to write and which were the most difficult, and why?

From the initial read through of the script, the story and Arthur’s character really spoke to me, it was such a sad and tragic story that I felt so sympathetic towards. I wanted the score to really depict that he was actually trying to bring joy to the world, to portray this lonely tragic character and show his softer side. His theme music was completed before the shooting started and the cello plays a large role in depicting his emotions from the beginning.

The most complicated part of the score to put together was definitely the last piece “call me joker”; the first version I wrote was about 10 minutes long. The original version was this long, sweeping, never ending bombastic music that went on and on. It was also a challenge to fit it to the scene, which was recut so many times in the end, so this piece needed a lot of reconfiguring. We were working towards the moment he stands on top of the car and smiles, which is a pretty huge moment - we had to rearrange the piece so many times to make every moment fit in the lead up to this.

Joker is a character study which called for in-depth yet uncomplicated scoring using an orchestra of 90 musicians, which sounds a little contrary and yet really works. You also scored Chernobyl – another project that required a lot of texture. How do you tap into such intricate storytelling and find just the right way to relay the themes?

As I mentioned earlier, Joker as a character really resonated with me. He starts the movie this lost character who doesn’t really know who he is, where he came from and has been completely let down by society. I wanted to use the cello to help portray his emotions through this and Todd was clear from the beginning that he wanted the cello to be a big part of the storytelling.

In the first scene where Joker is being beaten by a group of kids, the only instrument you can hear clearly is a lonely solo cello; what the audience doesn’t realize is there is a full orchestra behind this, which is almost hidden. You feel these bigger forces behind it from the very beginning. As his frustration grows and the film progresses, the orchestra grows too, the angrier he gets the bigger it grows. Through all of this I wanted to ensure the music remained very simple and uncomplicated, naïve and not particularly cool – very similar to how the audience sees him.

Chernobyl was different; it is the story of a very real and recent tragedy and from the beginning we knew that a different approach was needed for the score. I knew the series wanted to tell the story with as much respect and realism as possible and the score needed to portray this, so a fantastical composition was not going to be suitable here. I wanted to show the audience the sense of fear, confusion and loss, and portray the ever-present creeping fear that is radiation itself. I focused largely on the two main musical characters of the show - the nuclear disaster and the human suffering.

I tried to steer clear of any preconceived ideas of what being in a powerplant was like before visiting Ignalia to record - I wanted to let the space influence the music. The entire score in the end was made up of recordings from the power plant, with the only human element being my voice. Once back in my studio, I spent six months turning these recordings into instruments for the score, processing them to make them audible, and modular processing to give them the retro futuristic vibe of the series as a whole. The only classical instrument in the score is my voice which I used to express grief and sorrow and human emotions. I used impulse responses from spaces inside the plant and then used the reverbs from these spaces on my voice, allowing the power plant to shape and directly affect my musical performance. In the end we turned the powerplant into the musical instrument, which helped to tell the story.

What do you think are the keys to a successful partnership between a film’s composer and its director?

Good communication and trust is key. You need to make sure you are telling the same story from the beginning of the working process.

For Chernobyl, you went to an old radioactive power plant to record the sounds you included in your score and had to leave some of the material behind because it was too high in radioactivity. Tell us a bit about that.

I visited the Ignalia power plant where the series was subsequently filmed in August 2018, with sound recorder Chris Watson and score producer Sam Slater, having intentionally not written or pre-recorded any music. Instead we wanted to explore the power plant and let that help shape the score. On location we recorded hours and hours of sounds which became the building blocks for the score, which turned the power plant itself into the musical instrument. The thing about recording in a decommissioned power plant was that it was still very much radioactive. We had to wear protective suits and though most of the equipment was unharmed, the wires we used had to be left as the prolonged exposure to the floor had left them with dangerous levels of radiation.

You’ve released four critically acclaimed albums. How does your solo work as an artist compare to the scores you write? Do they come from the same source of inspiration?

What motivates you to continue your solo work, and how do you find time to switch gears and express your innermost thoughts so freely and compellingly?

I have always had an incredibly strong urge to write and play music. I don´t really know where that urge comes from, it has just always been there. Music is my way to function as a person, as I have a much easier way expressing myself through music than with words.

After spending the last year and a half completing Chernobyl and Joker, I think I am going to take a little bit of a break from composing for films and retreat to making a record. That said, I have just completed the first live performance of the Chernobyl score, which I will also be performing in a number of venues over the next year.

I have had a lot of support from the wonderful staff at BMI, which is invaluable.