Posted in MusicWorld on March 18, 2007 by Kevin Zimmerman 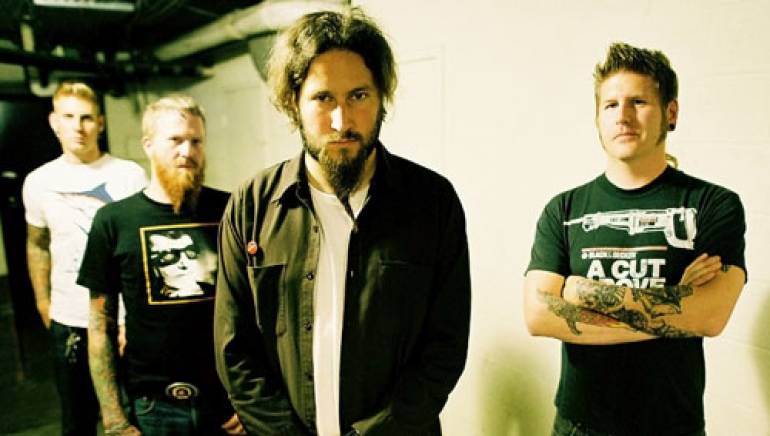 Concept albums aren’t just for nostalgic ’70s lava-lamp owners, as recent releases by such diverse acts as Green Day and The Mars Volta have proved. And still more new life is being breathed into the model by Atlanta-based quartet Mastodon.

New album Blood Mountain (Reprise) tells of a quest to ascend the titular crag to find a crystal skull, reach the peak and insert the skull inside the band members’ own heads in order to transport them to the next phase of human evolution — all aided and abetted by the band’s trademark melding of crusty prog, speed metal, death imagery, and a surprisingly catchy cache of tunes.

“We get lost, face starvation, have to kill our own food and eat it. We get trapped in an avalanche and we meet all these creatures along the way,” expands drummer Brann Dailor, who writes the lyrics along with singer/bassist Troy Sanders and guitarist Brent Hinds.

And, as evidenced by the group’s moniker, it’s all pretty heavy. “This album is a nice collaboration of everybody’s character and individuality,” Sanders says. “We’ve combined to make a meal with wicked ingredients. But most important, everything we do is completely pure and honest.”

With guests ranging from Queens of the Stone Age’s Josh Homme to The Mars Volta’s Cedric Bixler, Blood Mountain continues to forward momentum begun on Mastodon’s last album, 2004’s Leviathan (based on Moby-Dick), which led to Kerrang labeling them “The Best Band on the Planet.”

The group came together from the ashes of hardcore acts Four Hour Fogger (Sanders and Hinds) and Today Is The Day (Dailor and singer/guitarist Bill Kelliher). “Within five minutes it felt like a done deal,” Sanders attests.

“When we started, we never imagined getting to where we are today,” he adds. “It’s all been part of this crazy journey that we’ve lived, and we’ll keep rolling forward. We feel like we’ve still got so far left to go.”