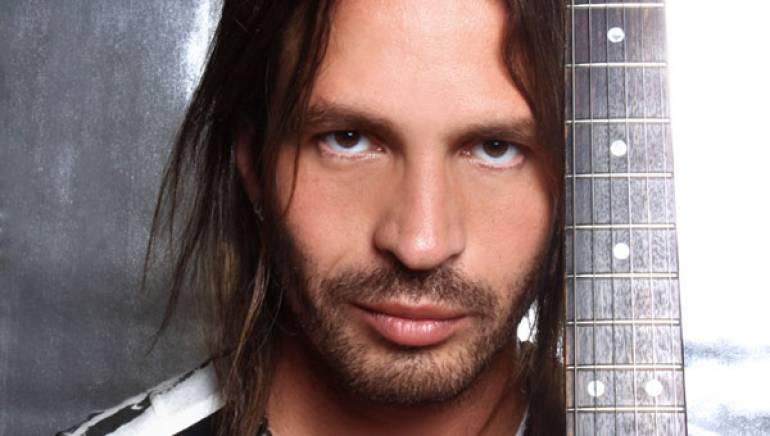 Nestled in the photo section of his official website, guitarist Sergio Vallín is featured in various backstage poses with a gaggle of contemporary guitar greats, including Kiss founding member Paul Stanley, country session legend Albert Lee, and jazz-fusion picker Al Di Meola. But one photo in particular stands out. It shows Vallín engaged in what appears to be a passionate conversation with Latin rock pioneer Carlos Santana.

The photo speaks volumes. Just as Santana fused Latin folk with American rock and jazz, so has Vallín tapped his tremendous musical talents to bridge the gulf between Latin and American popular musics. As lead guitarist for the sensationally popular Mexican band Maná, Vallín has recorded best-selling albums and toured the world. His instrumental and songwriting contributions have helped Maná earn several prestigious honors, including three Grammys, five Latin Grammys and nine Billboard Latin Music Awards. Popular in Mexico as well as the US, Australia, Spain, Asia and the Middle East, Maná has sold over 22 million albums on their way to becoming a truly global phenomenon.

The album has been described as a collection of 13 original tracks with “commercial hooks and lyrics that veer from colloquial to frankly sexual.” Warner Music Latina’s decision to distribute Bendito Entre Las Mujeres throughout Latin America is testament to Maná’s and Vallín’s tremendous appeal.

Though Vallín knew that fans would expect a guitar album from him, the 36-year-old picker wanted to pursue a different creative path. “I have stories and thoughts to share, but I’m not a singer,” Vallín told Reuters news service. “So I invited women, because I admire all women — my mother, my wife, my sister, my daughter … prior to joining Maná, my brothers and I had a band and the singer was my sister. I wrote music for her to sing.”

In an endearing illustration of his love and respect for the other gender, Vallín penned two instrumental songs on the CD for his daughter, including the tracks “Historia De Una Nena” “I” and “II” (Story of a Little Girl). Another track, “Porque Te Vas,” was originally recorded by Maná. The rerecording features the guitarist’s sister, Rocio Vallín, supplying lead vocals. Sergio Vallín composed the song in honor of his mother, who died just 11 months following the death of her husband.

“This came from the heart,” Vallín told Reuters. “I’m a member of Maná, and when we start our new album, I’ll have to focus on that. But I feel like I’ve come home. [The songs] are part of me. Things about me most people didn’t know existed have now found the time to come to light.”

Invited to join Maná in 1994, Vallín slowly broadened his importance within the band, becoming one of Maná’s most valued members. In addition to providing the crackling guitar undercurrents that have helped make Maná Latin rock idols, Vallín has also composed or co-written some of the band’s best-loved hits. The guitarist’s original song “Bendita Tu Luz” spent four weeks at #1 on Billboard’s Hot Latin Songs chart in 2007, and more than six months in the top 10.

Vallín scored another triumph in 1999 when he performed on “Corazón Espinado,” a track featured on Santana’s Grammy-winning 1999 album, Supernatural. The track was an event in itself: a torch-passing collaboration between the undisputed master of Latin rock, and one of the genre’s most dynamic contemporary guitarist/songwriters.