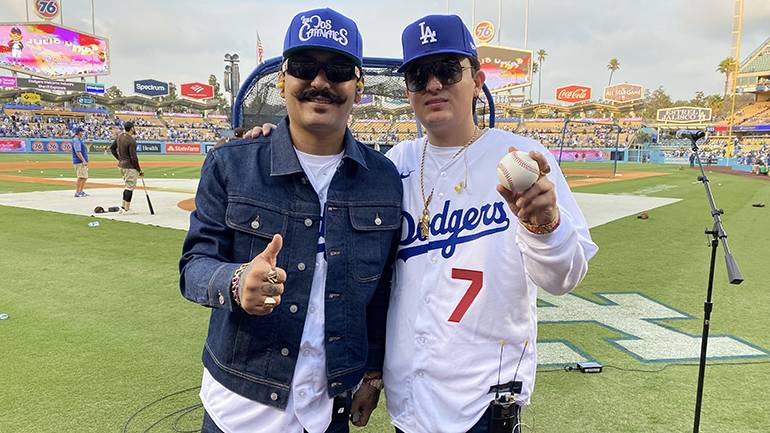 BMI was excited to take part in a special pre-game performance by Los Dos Carnales, as they performed on the legendary field of Dodger Stadium, Tuesday night, in honor of pitcher Julio Urías. The duo played prior to the game between the Los Angeles Dodgers and the San Diego Padres, warming the crowd up with a rendition of “It’s Time for Dodger Baseball” in Spanish.

No stranger to regional Mexican music, celebrated Dodgers’ pitcher Julio Urías is such a fan of Los Dos Carnales that he had their song “Al Estilo Rancherón” play during his time on the mound during the Dodgers’ 2020 World Series face-off against the Tampa Bay Rays, an addition that might have helped them win their first World Series title in 32 years.

In a show of mutual appreciation, the duo presented Urías with a customized guitar, while the superstar pitcher gifted the band with one of his authentic, game-used jerseys.

BMI’s own SVP Creative, Alex Flores and VP Latin Jesus Gonzalez were on hand for the great night of music and baseball.