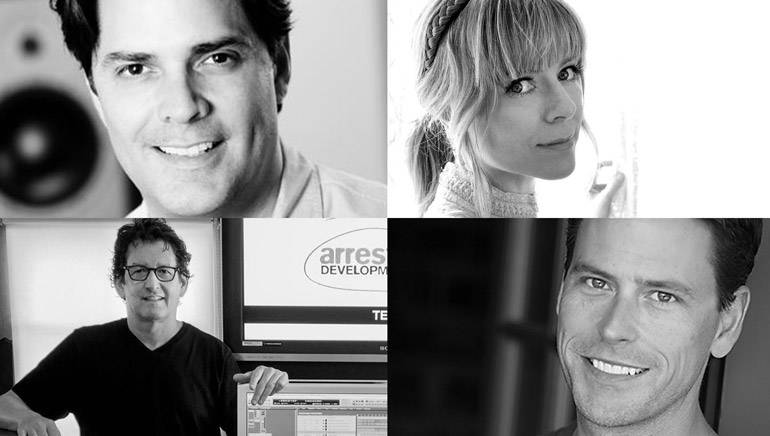 What do composers David Schwartz, Gwendolyn Sanford, Ed Rogers and Tony Morales all have in common besides, obviously, creating music? They all work on hit Netflix shows that people love to “binge-watch.” Even without popcorn, GRAMMY-nominated Schwartz helps mesmerize audiences with his music to Arrested Development, BMI award-winning Sanford composes music for the insatiable audience of Orange is the New Black and Emmy-nominated Rogers and Morales are responsible for scoring the hit series Bloodline. And each time a new episode comes on and the opening theme plays, viewers are transfixed, again and again. It’s as predictable as Pavlov’s dogs and as mentally cleansing as shampoo: listen, watch, repeat.

We caught up with these four talented BMI composers to ask how they keep their music fresh show after show, and to try to explain the cultural phenomenon of which they are an integral part. Here’s what they said:

What are the most important elements of writing for TV that you are mindful of when you consider that people may “binge-watch”? Has it changed the way you approach composing?

David Schwartz: Arrested Development is an interesting case study.  Our first three seasons aired on Fox and after a six-year cancellation, season 4 streamed on Netflix. Season 4 was musically more thematic than the first three. Arrested D has so many call backs, we tried to balance using themes to unify a story, at the same time being careful not to overuse the same thematic material. This becomes paramount when viewers are watching 10 episodes in a single sitting.  Of course, AD is a comedy, and in the end, comedy rules.

Gwendolyn Sanford: I try to view the season as a 13-hour film or mini-series. We create themes for specific storylines and revisit those themes as the story progresses. Usually, the music evolves. OITNB has so many different characters, all with different backgrounds. Each one has their flashback score that somehow gets folded into the bigger prison sound. Even after three seasons, we’re still unraveling their backstory and introducing new characters, so it can be complex and random at times – as is life.

Ed Rogers and Tony Morales: Knowing that many fans might binge-watch the entire series in a very short period of time, we approached the project more as a 13-hour movie than a traditional TV series. Before we started scoring individual episodes and specific scenes, we developed a few key melodic themes and specific sound palettes. These became the backbone of the score for the entire season, and although you might not hear the full statement of these themes in every episode, there are pieces of them woven throughout. These small strands of thematic DNA live in the entire score and keep it cohesive.

You’ve all scored hit shows before and also received accolades for your work on diverse projects in other mediums – everything from video games to playing in bands, writing ad spots and scoring films. How do you go from one particular project to the next, keep your own musical voice but not blur the lines from one project to the other?

DS: It’s the story and the picture that shape each project’s musical identity. At the beginning of any new job, I sometimes wonder ‘how can I make this original?’ Producers and directors are often asking for ‘something that has never been heard before’; of course that is a daunting request that can be counterproductive. That said, once collaboration has started between the show-runners and myself, something totally unique comes to life. It still amazes me. I have been fortunate enough to work in a wide variety of genres, yet people tell me it still sounds like me. Therefore, I tend to not worry about keeping my musical identity - it follows me wherever I go.

GS: Having a background in theatre, I approach score as if I’m acting through music. I allow the story and emotion to inform the way I support and interpret the scenes. Each score I create is a reflection of the project, so naturally, it will have its own voice. It’s my job to be a conduit for the sound the project calls for. It helps to be diverse in your musical tastes and to connect to the material.

ER/TM: There are many things we do to prepare when we are starting a new project. First we do our research to try to kick-start new and interesting ideas about how we might want to produce the score – is it a smaller, intimate sound or a bigger, more epic sound? Are there orchestral elements or is this something that will be created with non-traditional instruments?  Is it a more in-your-face sound or a wider, ambient sound? At the same time, we experiment and try to figure out some specific motifs that could work in the context of the story and the world the characters live in. Then we take all this and filter it back through our musical gut-instincts and try to figure out the most effective way to help the storytelling.

When you write your theme songs, how do you make them memorable and when do you know they’re ready?

DS: More than any other type of score, the theme song is really about going with your gut, at least for me. It’s often my first idea. If that first idea isn’t making sense to me, there’s something that makes me persist until it morphs into something that I like. With the Arrested Development theme song, I actually wanted to mute a few elements and make it more sparse.  Show creator, Mitchell Hurwitz, actually kept on asking for more elements, making it more and more layered, like the show. He was right.

GS: Where underscore can show the subtle nuance of a scene, theme songs show more the broad overview. If you can tell the listener in 30 seconds what they’re in store for – really set the tone with a memorable hook - I think you’ve got something. It’s not ready until the filmmakers love it.

ER/TM: You don’t always know when they are ready. Memorable themes take time to write because they need to be molded and shaped and continually tested. If I wake up in the middle of the night with a theme in my head that I’ve been working on then I know at least I’m moving in the right direction.

Composer David Schwartz attended the School of Visual Arts in New York and the Berklee College of Music in Boston. Early on in his career, he mastered a wide range of musical genres by performing with such diverse acts as John Hall, Manhattan Transfer, the Boston Civic Symphony, the Glenn Miller Band, Howard Johnson, and John Sebastian.

In 1990, David began composing music for film and television. His first network television series, the multi Emmy award winning hit, Northern Exposure, earned him a Grammy nomination for Best Instrumental Composition for its memorable theme song. The composer scored every episode of the show for its entire seven seasons.

In 2003, Gwendolyn Sanford was recognized at LA Weekly’s Music Awards as the Best New Genre/Uncategorizable Artist. That same year she also she won KFPK radio’s The Music Never Stops #1 Album of the Year” award for Dew while Amoeba Music named her their “Homegrown Artist Pick.” Prior to Orange Is the New Black, Gwendolyn co-composed the score for Weeds Seasons 2-8 and in 2007 she received a BMI award for her work on the hit TV show. In addition to being a noted composer, Gwendolyn is also an accomplished actress.

Edward Rogers has written the music for several critically acclaimed television series, including Warehouse 13 and Over There as well as numerous films and television movies. In 2010, he was nominated for a Primetime Emmy for “Outstanding Original Main Title Theme Music” for the vWarehouse 13 theme and was nominated the following year for a Hollywood Music in Media Award for “Best Soundtrack” for the Warehouse 13 Season 2 soundtrack album. In 2014 he collaborated with Tony Morales on the score for the film The Bag Man starring Robert De Niro.

Emmy-nominated Tony Morales began his career as a staff composer within the commercial music division of Hans Zimmer’s Media Ventures in 1998. Since that time he has gone on to compose numerous scores for film and television including the recently released In Your Eyes (written by Joss Whedon), Scorpion (CBS), and Hatfields & McCoys (co-composed with John Debney), which earned Morales his first Emmy-nomination.