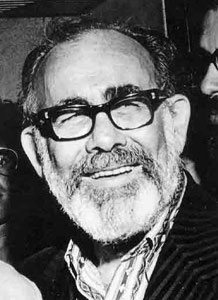 Jerry Wexler, a record producer known for his contributions to music through recordings by such greats as Aretha Franklin, Ray Charles, Bob Dylan and Willie Nelson, died August 15 in Sarasota, Florida. He was 91. The cause of death was congenital heart disease.

Wexler was born January 10, 1917 in New York City to Polish immigrants who steered him to pursue a career in journalism, a path he choose after serving in World World II and earning a college degree. During his tenure as a writer for Billboard magazine in the 1940s, Wexler coined the term “rhythm and blues” for the magazine’s black music charts. While at Billboard, Wexler met Ahmet Ertegun and forged a friendship that lead to his position as co-director of Atlantic Records, a then small r&b label in New York.

Atlantic Records provided an outlet for African-American performers to release numerous ground-breaking records in the 1950s and ’60s, and later became the home for rock icons like Led Zeppelin and The Rolling Stones. Wexler’s production credits include Franklin’s “Respect” and Wilson Picket’s “In the Midnight Hour,” among other classic songs. In 1967, Wexler and Ahmet Ertegun sold Atlantic Records but both continued to oversee the company. Jerry’s musical tasted broadened, which lead to his work with such artists as Willie Nelson, Delaney & Bonnie, Carlos Santana, Dire Straits, and George Michael.

In 1987, the Rock and Roll Hall of Fame inducted Wexler for his sizeable contribution to the music industry. Known for historical perspective and appreciation of all genres of music, he recognized BMI’s role in and impact on the industry.

Wexler stated, “It’s hard to imagine what music would be like without BMI. Before World War II there was only one kind of music that seemed to be allowed in America. It was continuation of what had been the European tradition of 32-bar songs, whether they came from shows or popular songwriters. And it was an elite club. The lid was kept on rhythm & blues music, country music, ethnic music, folk. Once the lid was lifted — which happened when BMI entered the picture — the vacuum was filled by all of these archetypical American musics. BMI turned out to be the mechanism that released all those primal American forms of music that fused and became rock & roll.”