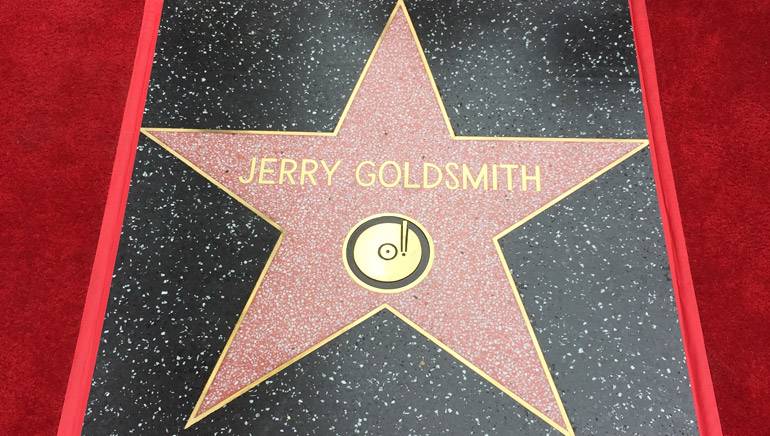 Although a behind-the-scenes presence in epic films and TV series that include several Star Trek sagas, The Omen, Poltergeist, Patton, Basic Instinct, The Wind and the Lion, Alien, L.A. Confidential, The Twilight Zone, Dr. Kildare, The Man From U.N.C.L.E, The Waltons, and many, many more, the late Oscar and Emmy-winning BMI composer Jerry Goldsmith’s new star on the Hollywood Walk of Fame shines just as brightly as any actor or actresses who took center stage. In addition to his wins and nominations for nearly every major music award, the highly-decorated composer’s music is still played virtually every hour of every day around the world due to his prolific and successful five-decade career. Other accolades on his extraordinary list of accomplishments include Variety’s first American Music Legend Award (1995); an honorary doctorate from Boston’s Berklee College of Music (1990); lifetime achievement awards from the American Society of Music Arrangers and Composers (ASMAC 1990), and the Society for the Preservation of Film Music (1993); two governors’ awards from the National Academy of Recording Arts and Sciences (NARAS 1994, 1999); and an honorary membership in London’s Royal Academy of Music (2003). Goldsmith is also immortalized with a statuette in his likeness (“the Jerry”), which has been awarded each year for the past decade at Spain’s International Film Music Festival to an individual for excellence in the art of film music. And as if that’s not enough to complete his immense impact, Goldsmith also has the distinction of having written two of the American Film Institute’s top 25 film scores of all time: Chinatown and Planet of the Apes.

BMI’s Vice President of Film, TV and Visual Media Relations, Doreen Ringer-Ross, who worked with Goldsmith after he was honored with BMI’s Richard Kirk Award among several other honors, had the pleasure of watching Goldsmith’s Star unveiled as his wife, Carol Goldsmith, and their son Aaron Goldsmith accepted the award for the late composer on Tuesday, May 9, 2017. The day, declared “Jerry Goldsmith Day” by the city of Los Angeles, was marked by speakers including BMI composers David Newman and Charlie Fox who spoke about Goldsmith’s innumerable contributions, and was topped off with a champagne reception hosted by BMI. In addition to his new Star on the Hollywood Walk of Fame, Goldsmith is also indelibly remembered by several college scholarship funds that bear his name, including the Jerry & Carol Goldsmith Music Scholarship at Los Angeles City College, and two fully endowed scholarships for composition at UCLA that include the Jerry Goldsmith Scholarship Fund for Film Music Composition, as well as the BMI/Jerry Goldsmith Film Scoring Scholarship.

Congratulations to the Goldsmith family on receiving such a deserved honor for one of BMI’s, and the world’s, most treasured composers.