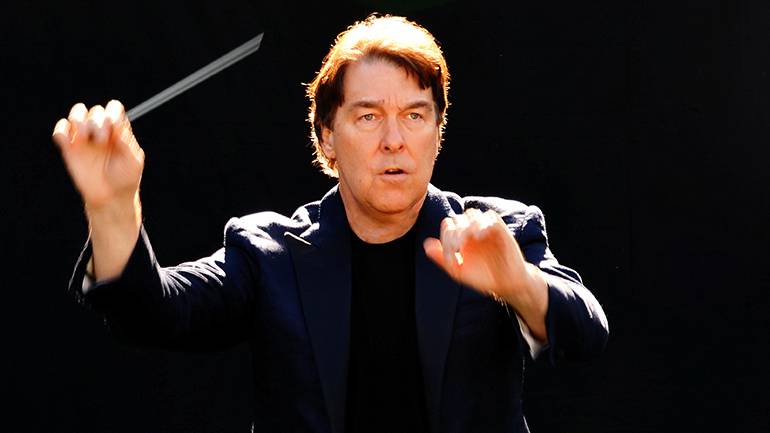 Renowned composer and conductor David Newman has scored more than 100 films throughout his 30-year career, including War of the Roses, Heathers, Girls Trip, Hoffa, Ice Age, and Anastasia, the last of which earned him an Academy Award nomination. A versatile composer, Newman is at home writing for comedies, dramas, and animated films, and his most recent project, overseeing orchestral music for Steven Spielberg’s West Side Story, offered the incredible opportunity to revisit Leonard Bernstein and Stephen Sondheim’s beloved score.

Newman is quick to point out that he did not alter Bernstein’s legendary, Tony Award-winning score (Sondheim, who recently passed, provided West Side Story’s lyrics, while Bernstein wrote the music), which was originally written for the stage and is considered one of the greatest Broadway scores of all time. Newman was quite familiar with the music after touring as the conductor of a live orchestra alongside the movie in the U.S. and abroad and working closely with the Bernstein office on a violin-orchestra suite inspired by the score.

Newman started his career as a professional violinist and conductor, then gravitated towards composing for film. Conducting remains a passion of his—he’s conducted distinguished orchestras around the world—and he’s also passionate about fostering the next generation of musicians, serving on the board of the American Youth Symphony, and mentoring young composers.

You’ve scored well over 100 films, but as Steven Spielberg’s reimagined West Side Story is based off one of the most beloved theater scores, you had a slightly different role with this production. Can you explain what your role was in bringing this new film—and Leonard Bernstein and Stephen Sondheim’s legendary music—to life?

I was hired to oversee the orchestral music for the film. One cannot mess too much with an iconic piece like West Side Story. My role was to give Spielberg what he needed without inserting myself into the music. There is quite a bit of material to draw from. It’s all Bernstein. I am NOT an arranger or orchestrator of other people’s music. This was a unique experience for me. However, I know West Side Story very well, so my role was to help bring it to life, without reimagining or updating it. That was not my mandate. We wanted to get the best performances of Bernstein’s magnificent score.

It’s hard to believe it’s been 60 years since the original West Side Story film adaptation came out. What’s unique about Spielberg’s version, compared to the 1961 film?

Speaking of Steven Spielberg, what advice would you give for developing and maintaining a good working relationship with a director?

Be a well-rounded, interesting, curious, person. Read, listen, look. Be a person that can have a conversation in person.

In addition to touring with a live orchestra alongside the movie throughout the U.S. and abroad, can you share a little about the violin-orchestra suite you composed that was inspired by songs from West Side Story?

I arranged this for Sarah Chang for an EMI CD we were going to do together. I worked very closely with the Bernstein Office on this. I, again, mostly used Bernstein orchestration.

Your father, Alfred Newman, was also a renowned composer. Did you start playing and composing music from a young age, and when did you know you wanted to pursue music professionally?

I didn’t ever study composition. I was a professional violinist and conductor in my 20s. Eventually I just couldn’t wait to have my conducting career just happen, so I moved into composing for film. Took me 4-5 years to get started.

You were the recipient of BMI’s Richard Kirk Award in 2009 and Classic Contribution Award in 2016. How did you first start working with BMI, and how has that relationship impacted your career over the years?

BMI is the greatest asset to composers that there is. I don’t think any of us could make a living for our entire lives without BMI. They lobby for IP rights, and scrupulously look after our interests. BRAVO!!!!