Posted in MusicWorld on November 5, 2009 by Malcolm Venable 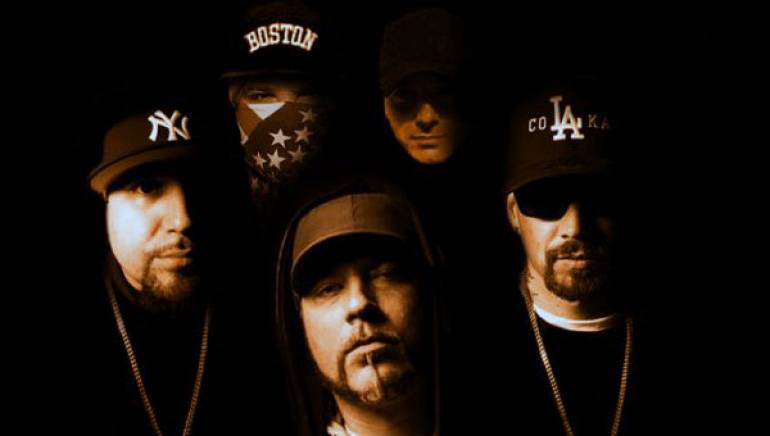 Since the rap group La Coka Nostra formed around 2006, it has become one of the most promising supergroups to emerge since the Wu Tang Clan. But even though they’re gaining the respect of critics and delivering knockout performances like those during the 2009 Rock the Bells tour, the whole group is something of an accident—right down to their name.

“It started as inside joke,” says Slaine, one of the group’s emcees and longtime mixtape hero in Boston. “When the group started I was doing cocaine heavily. We were in the studio, and someone said ‘We’re one big Costra Nostra.’ And Danny Boy said if you keep partying like that they’re going to call you ‘La Coka Nostra’ and it stuck.”

Slaine takes a no-holds-barred approach discussing his struggles with substance abuse on the album; it’s one of many gritty themes that also include politics, terrorism and violence that he and his bandmates explore on A Brand You Can Trust, released in July of 2009. Slaine, Ill Bill, DJ Lethal, Danny Boy and Everlast—the latter three were members of seminal 90s rap group House of Pain—had been working on the album since 2006 when they informally formed a collective.

But the process slowed dramatically when Danny Boy insisted though that the guys, spread out across the country, record in person as opposed to emailing files. Music industry veterans, they also waited for the right deal before singing with Suburban Noize Records. Their cautious development paid off: The album reached #6 on the rap chart, #11 on the independent chart, and #17 on the R&B chart.

“I think it wouldn’t have been as complete of an album if we’d rushed it,” says Slaine, who has already agreed to appear in another movie after his knockout turn in Ben Affleck’s Gone Baby Gone. “This album covers a wider range of topics, and it’s important for me to about my life experiences. Music is a form of therapy.”