Posted in MusicWorld on July 17, 2009 by Alexis Greene 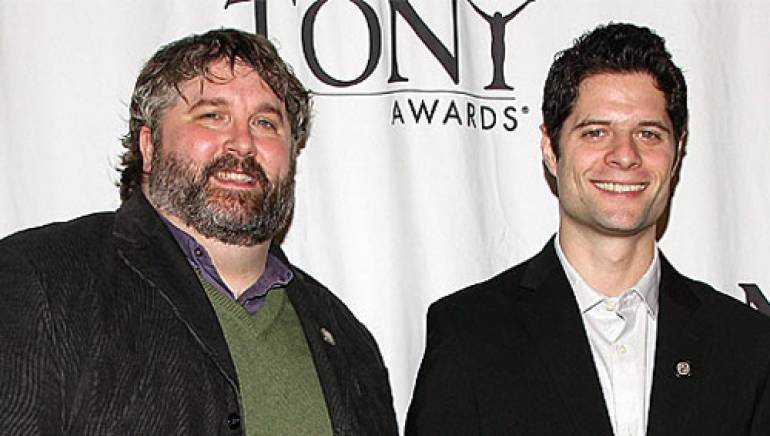 To look at them, the men make an unlikely pair. Tom Kitt is lean, dark, and clean-shaven, while Brian Yorkey is burley and bearded. Kitt sits straight, legs neatly crossed. Yorkey relaxes expansively.

But clearly this composer and lyricist-book writer complement each other artistically. Their most recent collaboration – the Broadway musical Next to Normal, about the effect of a woman’s bipolar disease on her family – won the 2009 Tony Award ® for Best Original Score for a Musical, garnered Michael Starobin and Kitt the Tony for Best Orchestrations, and Alice Ripley, as Diana, the Tony for Best Actress in a Musical.

“There’s a lot of trust,” says Yorkey about the men’s teamwork.

“There’s a balance,” Kitt adds, as they sit late one afternoon in the downstairs lounge of the Booth Theatre, where Next to Normal is ensconced.

Yorkey concurs. “Tom is one of the most honest, heart-felt people I know,” he says. “A lot of the sincerity you see in the show’s father, Dan, is Tom to music. I’m more of a cynic. I often walk around with a little dark cloud above my head. Sometimes that leads to conflict, but usually it leads us to see both sides of a character or a story beat, to balance the sunshine and the dark.”

Kitt, who is 35, and Yorkey, 38, traveled different routes to musical theater.

Kitt grew up in Long Island and Westchester, trained as a classical musician – much like the daughter in Normal – and nurtured ambitions of becoming a pop singer-songwriter.

Yorkey, a long-time fan of musician and satirist “Weird Al” Yankovic, admits to writing new, mostly unprintable words to existing songs. “The idea of putting words to music was something I liked early on,” he says.

Born in Omaha, Nebraska, which “didn’t have a huge musical theater tradition,” Yorkey grew up listening to his family’s cast albums and learning the shows’ characters and plots through the songs. “That’s where it started for me,” he says.

Their paths converged during the 1990s as undergrads at Columbia University, where they wrote music and songs for two editions of the Varsity Show. “As soon as Brian and I wrote our first score together,” says Kitt, “I knew I wanted to pursue musical theater seriously.”

Next to Normal was born in 1998 at the BMI Lehman Engel Musical Theatre Workshop. The pair’s final project for the workshop was to write a ten-minute musical, and one evening Yorkey was watching a Dateline NBC report about a woman struggling with depression and undergoing electroconvulsive therapy (ECT). He picked up the phone, called Tom, and despite the unlikely musical subject, the two were off.

The show’s original title, Feeling Electric, vanished along the way. But the first song they wrote – the delicate waltz “I Dreamed a Dance,” with the first notes emerging when Diana opens a music box – remains.

“I wrote the lyric to that,” Yorkey remembers, “and Tom wrote the music and called and played it over the phone, and – ‘Oh, my gosh, that’s great.’ We knew it would be a music box.”

Do composers and lyricist-book writers ever work together in neat, orderly fashion? Not Kitt and Yorkey.

“You would think,” says Yorkey with a trace of sarcasm. But no. “We went backwards.”

They would write a ton of songs, then do a reading, and, says Kitt, “It was like a jigsaw puzzle: ‘Well, this could work here…’ We had some beats that were married to each other, and moments that we thought would be in the story, but we didn’t go in any strict order.”

“Yeah,” nods Yorkey. “Which, for the record, we don’t recommend.”

Other projects intervened, including Kitt’s rendezvous with the ill-fated 2006 musical High Fidelity. But after accumulating about thirty songs, they buckled down to write the show.

Still, their creative process is fluid. Sometimes, if a moment needs to evoke a specific feeling in an audience, Kitt will write a piece of music and then Yorkey will put lyrics to it. But if it’s a narrative song, Yorkey might do a lyric first.

“I Miss the Mountains,” the poignant song Diana sings in Act I when she realizes that medication has deadened her life, came to Yorkey during a layover at the Denver airport. “I was staring out at the Rockies and I thought of the phrase. I got onto the plane, wrote that and e-mailed it to Tom. The music is perfect. Sort of John Denverish, a feeling of wistfulness and open space.”

In 2008, while Next to Normal was playing off Broadway at Second Stage, Kitt and Yorkey returned to BMI at the invitation of lyricist Richard Engquist, to talk about the show’s growth. The production’s reception had been positive, but not the raves the team had hoped for. Going back to their roots at BMI, the men spoke about what they had learned and were continuing to discover after ten years with their creation.

Fluidity has its place, but without a steadfast director (Michael Greif) and a committed producer (David Stone), Kitt and Yorkey believe their unlikely musical would never have made it to Broadway.

“A musical takes time,” says Yorkey. “They’re hard to get right. If you push them before they’re ready, they don’t work.”

“They push back,” says Kitt.