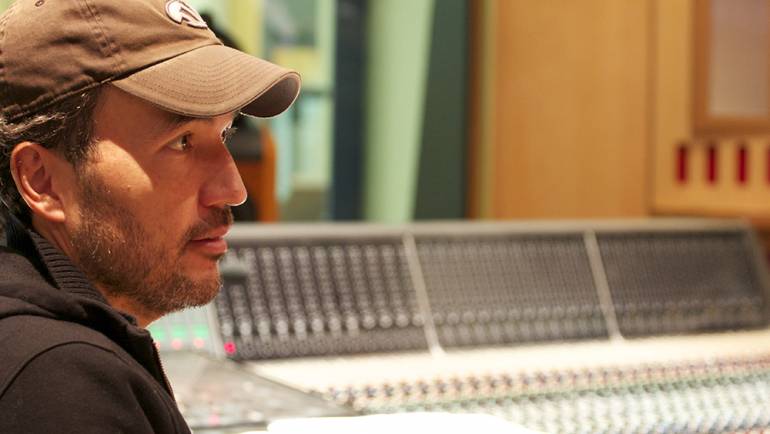 If you’ve gone to the movies in the past two decades, you’ve likely heard Steve Jablonsky’s music. The composer, who was drawn to film scores as a child, started experimenting with his own compositions at an early age. He initially studied computer science at the University of California, Berkeley, but he switched his major to music composition. As a college student, Jablonsky cold-called Remote Control Productions, composing legend Hans Zimmer’s (The Lion King, Gladiator, Pirates of the Caribbean) studio, landing an internship that changed his life.

His internship introduced him to composer Harry Gregson-Williams (Shrek, The Chronicles of Narnia: The Lion, the Witch and the Wardrobe), who hired him as an assistant. Gregson-Williams’ mentorship and encouragement led Jablonsky to write for Zimmer, and eventually to pursue his own projects, including soundtracks to blockbuster movies like Michael Bay’s Transformers films and hit television series Desperate Housewives.

BMI asked Jablonsky to discuss how mentors Zimmer and Gregson-Williams impacted his career, and to share his creative process behind scoring and how that creative process differs between films, television shows and video games. He also shared some helpful advice for aspiring composers.

Tell us a little about your background – when did you discover you could write music, and how did you find your way in the music industry?

Growing up I loved all kinds of music. My mother bought me a Yamaha keyboard and I would try to figure out how to play my favorite songs and film scores; mostly John Williams at first and then [Ennio] Morricone and [Hans] Zimmer. Looking back now, I realize how much I learned by studying those scores and trying to play them by ear. At that point I also started experimenting with my own compositions, but it wasn’t until much later that I thought I could write music for a living.

When I reached out to Hans Zimmer’s studio about an internship my plan was to focus more on the technical/engineering side of things, but I was very fortunate to be hired by the awesome Harry Gregson-Williams. At first, I was doing mainly technical work, but Harry was kind enough to let me use his studio after he finished for the day. He noticed what I was doing and started asking me to write a few small cues for his films. That’s really where it started. I continued writing for Harry, learned a lot from him, and after a few years started writing for Hans. Both of them were incredibly supportive and helped me get to the point where I was scoring my own projects.

You composed the score for two films coming out this month: Spenser Confidential (starring Mark Wahlberg, directed by Peter Berg) on Netflix and Bloodshot (starring Vin Diesel, directed by David S. F. Wilson) on Sony Pictures. Tell us a bit about how you got involved in each project and what it was like working on both. Did they overlap for you creatively?

I’ve done several films for Peter Berg and he called me for Spenser Confidential. It’s very different from anything we’ve done before, which made it really fun but also challenging. At its core the film is a detective thriller, but it’s also a comedy. There are a lot of really funny moments throughout the movie so the challenge was to create a score that could shift back and forth between drama and comedy without being distracting. Sonically I used a lot of guitars, keyboards and synthesizers. This palette of sounds worked well for both lighter and serious scenes.

I learned about Bloodshot through my agents. They told me the director was a fan of my work and wanted to meet with me. He sent me a video presentation he had made about his vision for the film and I loved it. I totally understood what he was going for and I wanted to work with him. David is incredibly smart both visually and dramatically. He responded to a combination of electronic and orchestral sounds so that’s the direction I took the score. I would call the music dark and rhythmic, like an inner motor that drives the Bloodshot character throughout the film.

Because of shifting schedules I had to bounce back and forth between Spenser Confidential and Bloodshot. So, it was nice that the films and the scores are so different. I suppose the one common denominator would be synthesizers. But sonically, there’s really no overlap between them. All the sounds are unique to each film. I find that once I’ve created a sound for a particular movie it’s hard to hear that sound in anything else. This is why I always try to create new sound palettes at the beginning of every project.

You’ve also composed music for blockbusters like Transformers, futuristic thrillers like The Island, horror remakes A Nightmare on Elm Street and The Texas Chainsaw Massacre, and the action thriller Battleship. In addition, you’ve done some comedy films, like Your Highness. Can you share a little about how your creative process works, especially for such different types of films?

I am very fortunate to have worked on such varied films. Generally speaking, my process is always the same. I start by trying to find the right sound and the right tone. By sound I mean instrumentation: strings, brass, guitar, mandolin, synthesizer, kazoo, etc. I experiment until I find a combination of sounds that I think feels right for the project. And by tone I mean scope and emotion: Is it big or intimate, heavy or light, fast paced or evolving slowly? With the help of the director and my own gut feelings I try to figure these things out early on as I’m developing ideas and themes. The end result is always different depending on the project, but the basic process is usually the same.

You’ve done multiple projects with directors Michael Bay and Peter Berg. What makes for a great working relationship with a director?

Like most relationships I think trust and communication are the two most important things. Directors have a million and one things on their plate at any given moment. I work very hard to earn their trust, so they do not have to worry about the music. Communication is a big part of that, making sure everyone is on the same page. Directors are constantly getting pulled in different directions, so if they don’t have the time to come see and hear the music, I try to keep them informed what I’m doing, even if it’s just a text or email. And when they do have the time, I take advantage. I try to involve the filmmakers in as much of the scoring process as possible. I always tell directors I am here to help you achieve your vision.

In addition to your expansive film work, you’ve also composed for television, including the popular show Desperate Housewives, and for video games and commercials. How is the process different composing music for these different mediums?

Creatively the scoring process is similar for every medium; you need to create the sound and tone. But there are big differences. With films, you have a clear beginning, middle and end. Yes, things change — even with films — but generally you can envision how the music will develop and where it needs to go. With television, you often don’t know where certain storylines are heading. The writers usually have an idea, but with something like Desperate Housewives — where we did 24 episodes per season — things will evolve during that time and sometimes there are surprises [and] you have to roll with it.

With video games, it can be a bit more fragmented, since you are basically creating a “tool kit” of music for the programmers to use. They will say things like, “We need five 90-second mid-tempo tension tracks that can loop seamlessly.” It’s actually quite fun writing music without the constraints of picture, but it’s also challenging because you have to make the tracks interesting without doing anything that might be distracting at the wrong moment during gameplay. You don’t want anything overly dramatic happening in the music when the player is just walking around.

Harry and Hans are the main reasons I have a career. There are definitely others that helped me greatly, but it all started with Harry and Hans. Harry gave me my first big opportunity by hiring me as his assistant. I not only learned about programming, orchestration and scoring to picture, but I also learned about collaborating with filmmakers. Simply watching Harry talk to directors and producers was invaluable. And because of Harry, Hans took notice of my work and asked me to join several of his projects. Needless to say, that was another invaluable learning experience, which eventually led to me scoring my own projects. I am very fortunate to have worked so closely with these two composing legends. It’s impossible to adequately thank them for everything they’ve done for me.

That said, what advice would you give to aspiring composers?

When I first started working for Harry and he would leave for the night, I often could have gone home as well but instead I chose to stay late to use his studio. During those extra hours I wrote music, which led to Harry asking me to write cues for his films. I put myself in a situation where opportunities like this would arise, and I took advantage. Everyone’s situation is different, but I would suggest finding a way to put yourself in scenarios (perhaps an internship) where opportunities might arise, and when they do, take full advantage and show people how serious you are. I’m not saying you need to work 90 hours per week, but I can tell you from experience that people will notice the extra effort and it will be rewarded.

How did you start working with BMI, and how has it impacted your career?

When Harry started putting me on cue sheets for my work, I realized I needed to join a performing rights organization. Harry was a member of BMI, so I also joined BMI. It was a big moment for me; I felt like I was becoming a legitimate composer. BMI is such a huge part of this industry, but at the same time they’re simply a great group of people that love music. Early in my career Doreen Ringer-Ross was so supportive. She welcomed me into this crazy business, and I will always be grateful to her and everyone at BMI — they do so many great things for music makers.

I’ve just started a new film for the amazing Rawson Marshall Thurber. He wrote a script called Red Notice that completely blew me away. It’s a huge, fun, action adventure film starring Dwayne Johnson, Gal Gadot and Ryan Reynolds. Needless to say, I am very excited to write this score. I’m equally excited to be teaming up again with my old friend Marc Cherry; he created Desperate Housewives and he has a new show that is equally fun, unique and twisted called Why Women Kill. It’s a show only Marc could make and I’m really looking forward to that as well.