Posted in MusicWorld on April 6, 2009 by Jewly Hight 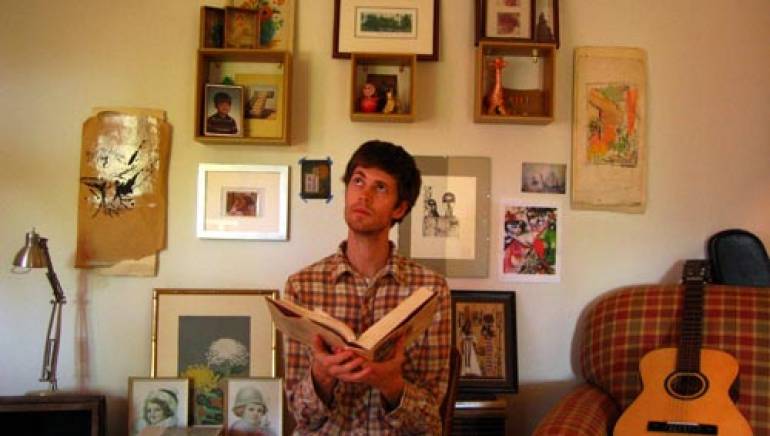 On the surface, Learning Music may seem about the furthest thing from folk music of the front porch variety. The recording and performing collective is led by founder John Wood, a trained jazz pianist and former backing musician for indie singer-songwriters like Inara George and pop-rocker Kelly Osbourne. He’s certainly no Woody Guthrie, though he does claim the iconic folk singer as an influence.

The collective is also based in Los Angeles, which isn’t exactly known as the cradle of traditional music, and its members rely just as heavily on electronic touches as acoustic instruments.

And yet, Learning Music has such elastic boundaries between participants and observers that it’s hard to see it as anything other than a new vision for folk music-making. The group’s live performances have featured as few as four musicians and as many as twenty, and at its workshops there is no such thing as a passive audience.

“I have this image in my head of folk music, people out in the hills playing music without any concerns or an audience or selling records or that kind of thing,” Wood shares. “Just playing it for each other and having fun, just for their own enjoyment. I’d rather see everybody making music together.”

Still, there is some record-selling involved. Wood began the collective by assembling a varied group of musicians and helping them work toward fruitful collaboration. He ended up launching a series of original recordings that provides subscribers with a new album each month.

“Even when I have a big vision for an album, I don’t always know where it’s going to end up, what it’s really going to sound like,” Wood admits. “But I bring people in and they sort of form that sound, and at some points I just have to sit back and watch it develop.”

As the group’s name suggests, it’s a unique, hands-on approach to musical education that—oddly enough—shares something in common with rough folk music field recordings. “Part of the idea of learning is that not everything’s going to be perfect, inherently,” Wood explains. “There will be flaws in everything.”