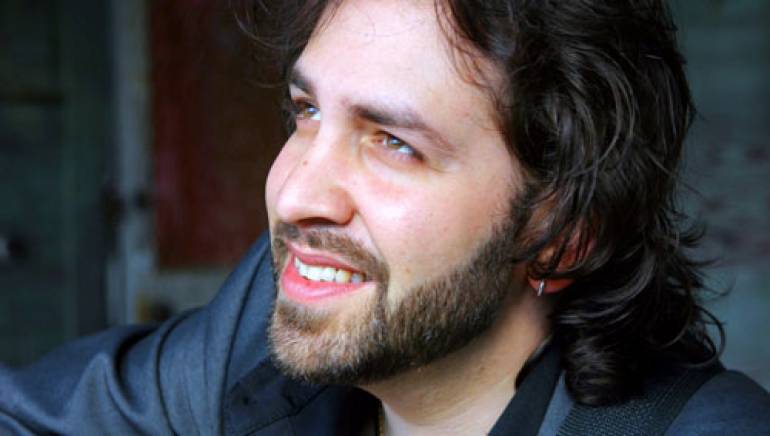 Nashville’s Joe Pagetta exposes a severe case of sincerity on his new EP OTHER PEOPLE’S NEWS. While the pop-and-roots singer-songwriter has always been earnest, he digs to new depths of feeling on these five new songs. When he compares historic meetings between Les Paul and Bing Crosby to Elvis Presley and Colonel Parker, then takes it a step further to include Jesus and his Apostle John in the song “Practice Makes Perfect,” he’s serious. On “Both Be Wrong,” a George Harrison-inspired plea for compromise and peace, he’s as resolute as ever. And who else but Pagetta could turn the architectural similarities of churches and train stations into an honest exploration of the meaning of life? Check out “Church or Train Station.” Throw in an homage to perseverance about fisherman returning to work after 2005’s tsunami and you’ve got the most serious – yet most hopeful – compositions of Pagetta’s career.

Recorded in two days at the Sound Kitchen in Franklin TN, and co-produced by Pagetta with acclaimed country music engineer Steve Marcantonio, four of the five rock and contemporary folk songs on OTHER PEOPLE’S NEWS possess the added distinction of being about things outside Pagetta himself – rare in the genre known as “singer-songwriter.” It’s only on the EP’s title track that the Jersey City, NJ native goes inside, giving voice to a narrator struggling with “living in my head/and blue/I’ve been living in my head/and can use/some other people’s news.”

From the “take no prisoners” guitar riff that kicks off the first track, the listener is escorted through a musical journey that can only come from some serious soul searching. If Pagetta’s 2004 full-length CD JOYWOOD mused about reconciliation, OTHER PEOPLE’S NEWS clearly is about the personal faith, perseverance and rebirth that come after it.

OTHER PEOPLE’S NEWS is the follow up to the acclaimed pop and roots-rock JOYWOOD, which was heard on NPR, MTV and close to 200 college stations nationwide. It was called “….a tough but pretty new album… complete with sidewalk grit” and “pop sparkle” (Tennessean), “…a sweet roots-rock collection packed with mandolins, chiming pop melodies and easy rhythms” (Nashville Scene) and “a combination of wit and muscle that’s pretty hard to resist. (Rapid River Arts).”

Born and raised in Jersey City, NJ, the first-generation Italian-American Pagetta got his musical start in the early 1990s with the melodic hardcore outfit Horror Time. After two years as the band’s frontman and co-writer, Pagetta left to reinvent himself as a contemporary singer-songwriter and troubadour in the songwriter clubs of Greenwich Village in the mid-90’s. He picked up early acclaim from the CMJ New Music Report Weekly “( ( (“more to do with hallowed troubadours like Leonard Cohen, Mark Eitzel and Skip Spence…”) and the Aquarian Weekly (“Pagetta rhymes internally like a young Dylan”). Fronting the Joe Pagetta Band in the mid 90’s, he performed frequently at clubs like the Bitter End in New York and the Saint in New Jersey and recorded two EPS, one prompting the Aquarian Weekly to call the band “a great acoustic pop band at work.”

Pagetta moved to Nashville by the end of the decade and in 1999 released an EP of odds ‘n’ ends from his Northeast days called RECOLLECTIONS OF MAYBEVILLE. The EP was licensed in its entirety by the Oxygen Network and hailed by the Louisville Eccentric Observer as being “filled with wonderful observations…with a right-sized rock format that would please on any John Mellencamp fan.” 2001 saw the release of the mostly-acoustic full-length SMALL WORLDS. The Rage in Nashville said it called to mind “easy-going Northeastern folk like Ellis Paul with a little sleazy 1970’s N.Y. rock a la Lou Reed thrown in.”

Pagetta continued to build his songwriting and performing skills in the early 2000s and soon became part of the burgeoning Americana and singer-songwriter rock scene developing in East Nashville. Working with producer George Marinelli, Jr. (sideman to Bonnie Raitt and original member of Bruce Hornsby and the Range), Pagetta released the pop and roots-rock Joywood in 2004, named for the East Nashville neighborhood where he resided. The album featured a guest spot by “Bette Davis Eyes”-icon Kim Carnes. Good reviews appeared in the Tennessean, Time Out New York, The Nashville Scene, Americana UK, Now on Tour, The East Coast Rocker. Pagetta hit the road in 2004-2005 and performed in New York, Boston, New Jersey, St. Louis and Philadelphia while securing opening slots for up-and-coming bands Antigone Rising and Blue October.

A former journalist for his hometown Jersey Journal, Pagetta holds a bachelor’s degree in English and continues to write prose both professionally and leisurely, while currently handling media relations for non-profit cultural organizations in Nashville. He lives just outside of Nashville with his wife Kathy and two cats.