Posted in MusicWorld on February 2, 2010 by Bruce Britt 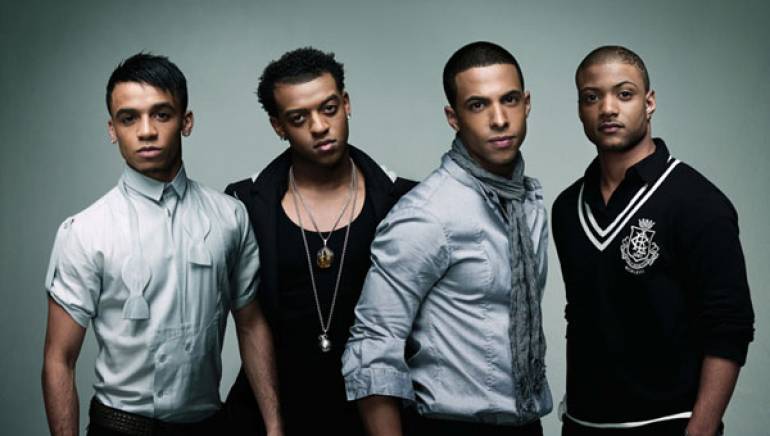 In 2009, just as news of Michael Jackson’s untimely death was reverberating across the globe, a new singing group steeped in the classic tradition of the Jackson 5 was surfacing out of England. Known as JLS, the UK foursome first emerged in 2008, employing silky harmonies and high-stepping dance moves that earned them second place on Simon Cowell’s star-making UK talent competition, The X Factor. The group’s eponymous 2009 debut went triple platinum in the UK, with CD sales exceeding 900,000 copies. Plus, JLS nabbed two honors at last year’s MOBO Awards, including nods for Best Newcomers and Best Song for their single hit British single, “Beat Again.”

Now, as they bask in the distinction of being the most successful group ever in the 5-year history of The X Factor, the members of JLS are taking stock. According to JLS singer/songwriter Jonathon “JB” Benjamin, he and his comrades acknowledge their tremendous creative debt to the Jackson family and the late King of Pop (ironically, JLS is even signed to the same Epic Records label that engineered the Jacksons’ phenomenal post-Motown success). Benjamin and group mates Oritsé Williams, Aston Merrygold and Marvin Humes have even worked out a segment in their live show dedicated to Michael Jackson and the Jackson 5.

“They were very key influences for us,” Benjamin said of the Jacksons during an exclusive interview with BMI from London. “The Jackson 5 set a standard, and Michael Jackson is very close to our hearts. We feel that it’s very important to remember what influences you, and how you got to where you are.”

Having conquered the UK and other parts of Europe, it’s only natural to wonder what plans JLS has for the US. The group’s debut album has yet to be released in America, though Benjamin says a stateside recording is being considered. He laughs heartily when asked how badly he and his mates want to win over America. “All in due time,” the singer assuredly stated. “Obviously, the US is a great place and has some great stars in its own right, but we’re not rushing to get over there. We’ve got an opportunity in the UK right now. We want to hold that down, and then branch out.”

The JLS success story is not so much a rags-to-riches tale as it is a case of heedful engineering. In summer 2007, founding member Oritsé Williams envisioned fusing elements of history’s greatest boy bands to create a contemporary supergroup. To achieve his goal, Williams posted singers-wanted ads online and around the University of North London campus. Having developed a database of potential band mates, Williams experimented with different lineups on his computer, cutting and pasting face against face before finally cobbling together his perfect team. “As soon as I saw the four of us, I knew it was perfect,” Williams has said.

Banding together under the name JLS—an acronym for “Jack the Lad Swing”—the foursome rehearsed intensively, eventually captivating UK audiences during the fifth season of The X Factor. Even more impressively, JLS won the respect of the notoriously discerning Simon Cowell, who gave the group a standing ovation after one of their “X Factor” performances. Hit singles like “Everybody in Love” and “One Shot” helped endear JLS to pop fans across Europe.

With a multi-platinum UK album and hit singles under their belt, JLS appears to have resuscitated the boy band craze. Until recently, conventional industry wisdom stated that the boy band trend that produced Backstreet Boys and *NSync was dead. But JLS has clearly defied such perceptions. Indeed, in an unambiguous demonstration of their clout, JLS recently edged UK superstar Robbie Williams off the top of the British pop charts.

For their part, Benjamin and his cohorts seem to view themselves as humble torchbearers in a long, distinguished line of best-selling male pop acts. “We’re doing a lot to try and bring the boy band concept back around,” the singer said. “There aren’t that many boy bands in the market at the moment, and we’re just trying to put our stamp on it. However we can do that, we’d love to do it.”