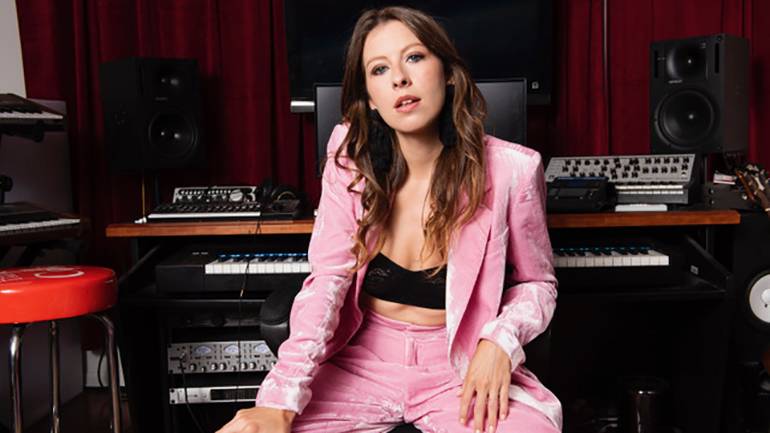 While many people took the opportunity to slow down during the pandemic, Jessica Rose Weiss has been running full steam ahead. The composer/songwriter/producer has worked on a variety of projects with releases on the horizon, including Midnight Mission and the highly anticipated documentary Still Working 9to5. Her phone is likely ringing off the hook after Labor Day Weekend since she scored the #1 movies on both Netflix and Amazon—Afterlife of the Party and Cinderella (starring Camilla Cabello, Billy Porter and Idina Menzel) respectively, which is no small feat in the digital streaming age.

The New York City native has been involved with the arts from a young age, studying ballet in her youth and making the decision to dedicate her life to music while studying abroad in London. During her time in London, she worked at Warner Brothers Studios, which led her to move to California for an apprenticeship with Hans Zimmer’s Remote Control Productions. She is currently still based in Los Angeles.

Weiss is currently working on the Kyle Newman film 1UP and is also busy outside of the film world, collaborating with other songwriters and producing singer-songwriter Lily Kershaw’s forthcoming album. Weiss took a break to chat with BMI about how she navigated her own path in the entertainment industry; her collaborative relationship with her mentor, composer Mychael Danna; and the mantra that guides her approach to her career.

Growing up in New York City, you were first drawn to classical music when you were studying ballet, and you discovered a passion for performing, including playing the role of Clara in Radio City Music Hall’s Christmas Spectacular. Did you always know you wanted to pursue a career in music?

After working at Hans Zimmer’s Remote Control, where many high-profile film and television composers started out, you decided to work independently. How did you forge your own path in the entertainment business?

I learned an incredible amount during my time at Remote Control. Not only about writing music for film and TV, but also about the business side of the industry. Watching Hans work with directors, producers, studio executives, etc., really prepared me for life outside of Remote. Through my time there, I got to know a lot of people in this business, and I made an effort to nourish and maintain those relationships as well as continue to build new ones. Whether that be seeking out up and coming talent I was interested in working with—I spent some time at AFI meeting young directors/producers—or working on commercials, documentaries, and short films, I just continued to say yes to everything. The mantra was and is, “Always be working, learning, and growing.”

You have a lot of exciting projects going on, including the feature film 1UP, Afterlife of the Party, and Cinderella, starring Camila Cabello in her acting debut. How do you balance working on multiple projects, especially during a pandemic?

I find that working on multiple projects helps keep me inspired. Luckily, the projects you mentioned weren’t on top of each other, but I don’t mind if they overlap at times. The goal is to continue to stay curious and passionate about the material. Making art during the pandemic has been an incredibly healing process for me, and I feel so fortunate to be keeping busy.

You’ve collaborated with composer Mychael Danna (On the Basis of Sex, Life of Pi) on multiple projects. What makes for a strong collaboration with another composer?

Mychael has been my mentor for several years now, so getting the opportunity to collaborate with him as a co-composer has been one of the biggest joys of my career. Communication and flexibility are incredibly important when collaborating. Really listening to each other’s ideas and being open to change is a fundamental element of creating something innovative and powerful. Demanding excellence surely doesn’t hurt, either.

You have a unique CV, in that you’ve worked your way up as a music editor—contributing to high-profile projects including The Academy Awards and Madagascar 3—in addition to your work as a composer. Do you have to approach these roles and projects with a different mindset, or is it pretty seamless for you to switch between roles?

I haven’t been music editing for quite some time now, but I think learning that skill set has been extremely handy in my work as a composer. Both roles require an incredible amount of discipline and attention to detail. Other than the director, a music editor is truly a composer’s best friend.

Speaking of switching between roles, you’ve also released your own music and you’re currently producing an album for singer songwriter Lily Kershaw. Do you see yourself producing artists more in the future?

Absolutely. I really love producing music and collaborating with other artists. Songwriting—like film composing—is the art of storytelling, so I enjoy helping facilitate those ideas and bringing those stories to life.

What advice would you give to a young artist who is just getting started in the music industry?

Say yes—always say yes. Be flexible, stay hungry, and be patient. The goal is longevity, not instant gratification.

I am currently working on Kyle Newman’s new film 1UP, which has been so much fun. My synthesizers are getting a lot of exercise. I also have two other studio films that are coming up which unfortunately I can’t discuss at present, but I can say that I am very excited!

How did you start working with BMI and how has the relationship impacted your career?

In 2017, I was fortunate enough to be asked to participate in a show called “The Future is Female,” which was comprised of a group of talented female composers who wrote original works for a concert performed by The Hollywood Chamber Orchestra. After the performance, I met Reema Iqbal [Senior Director at BMI], and the rest is history. She and I quickly bonded, and we discussed the benefits of being part of the BMI family. I have always felt very supported by Reema. She’s been a great source of advice and a shoulder to lean on as I’ve learned how to navigate the business side tof this job.