The BMI Foundation, Inc. has announced that Columbia University graduate student Jeffrey Simno has won the 2008 Robert Sherman Scholarship. The $1,000 award is made possible through the generosity of Mary Poppins composer Robert Sherman and is given each year to a talented student composer studying musical theatre. 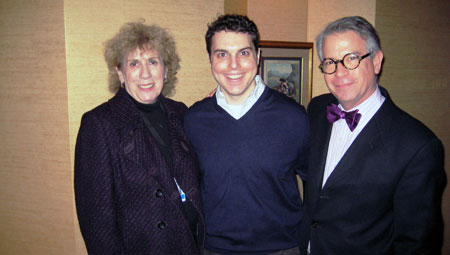 Simno, a Theatre Arts graduate from Muhlenberg College, is an accomplished librettist with a varied theatrical background. A native of New Orleans, Jeffrey grew up as child actor who performed on stage and in television commercials; appeared on Nickelodeon; and was cast personally by Quincy Jones and Brandon Tartikoff to play a regular on a FOX-TV sitcom. A participant in the BMI Lehman Engel Musical Theatre Workshop, Simno is currently honing his writing talent as a student in Columbia University’s Graduate School of the Arts, pursuing a Master of Fine Arts degree in the Theatre Management and Producing Program. His additional pursuits include singing, and working as a promoter for Continental Airlines and a press representative for Columbia Stages. Upon graduation from Columbia, Jeffrey plans to continue to develop his own work while assisting other talented writers, produce for Broadway, and build a large-scale regional theatre in New Orleans to be used as a bellwether for Broadway-bound productions.

As one-half of the Oscar-winning songwriting team the Sherman Brothers, BMI composer Robert Sherman has written some of the best-loved and most-recognized songs in history, including such Disney themes as Mary Poppins, The Jungle Book, Parent Trap, Chitty Chitty Bang Bang and The Aristocats. With a career that spans almost 50 years, the Shermans have accumulated countless accolades, including two Academy Awards and nine nominations, two Grammy Awards, 23 gold and platinum albums, induction into the Songwriters Hall of Fame, and a star on the Hollywood Walk of Fame for songs like “Chim Chim Cheree,” “Supercalifragilisticexpialidocious” and “It’s A Small World (After All),” considered the most-translated and most-performed song on earth.