Posted in MusicWorld on August 27, 2010 by Bruce Britt 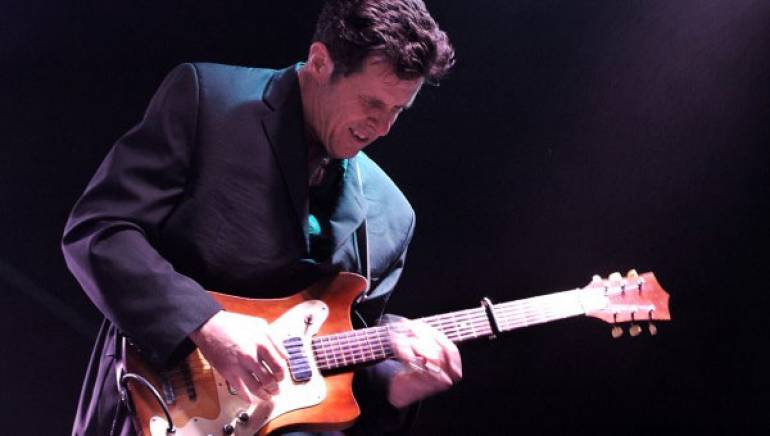 Like all the best music journeymen, multi-instrumentalist Jeff Turmes has spent much of his career toiling modestly in the shadows. Reputed for providing the sort of bedrock musical accompaniment that makes his employers sound their best, Turmes has supplied formidable support for the legendary likes of Mavis Staples, Tom Waits, Richard Thompson, R.L. Burnside, Gatemouth Brown and more.

But as his revelatory new solo album reveals, Turmes deserves top billing for his own songwriting, performing and arranging. Five Horses, Four Riders (Fat Head Records) features 13 original compositions so steeped in the minimalist tradition of the blues, they sound like long-lost postwar recordings harvested from an archeological dig. Turmes’ songs are complemented by intimate performances and sparse, semi-acoustic arrangements that underscore the economical power of his melodies, not to mention the soul-shaking humanity of his lyrics.

During a recent interview with BMI MusicWorld, Turmes said that Five Horses, Four Riders is an attempt to strip his emotions and songs down to their barest essence. “I would say that I wore my heart a little more on my sleeve on this one,” the singer says. “It’s a really personal record.”

Personal, indeed. In addition to singing and composing all the songs featured on the new album, he also performs commendably on acoustic and electric guitars, banjo, bass clarinet, baritone sax and acoustic bass. Even the evocative, primitive sketch on the CD’s cover was illustrated by Turmes.

That primal cover art serves as a visual complement to bare-boned shuffles like “Something Must Have Happened,” “When My Baby Wakes Up” and “Jack-a-hammer.” On the plain-spoken “Turn Your Heart in My Direction,” Turmes adroitly blurs the distinction between starlight r&b balladry and torch-song jazz. “I wanted to write a love song that didn’t have any irony, double meanings or anything,” Turmes said. “That song is what came out.”

The album is Turmes’ third solo excursion, taking its distinguished place alongside previous recordings including Every Day’s My Lucky Day (2002) and The Distance You Can Travel (2006). In 1996, Turmes collaborated with his wife, blues singer Janiva Magness, on the album It Takes One To Know One. Each recording serves as a primer in musical expressiveness.

“I like sincerity,” Turmes said, ruminating on his songwriting approach. “Though I love sarcasm and layers of meaning, I think it’s important to feel that the singer, or the writer, really felt something strong when they wrote the song.”