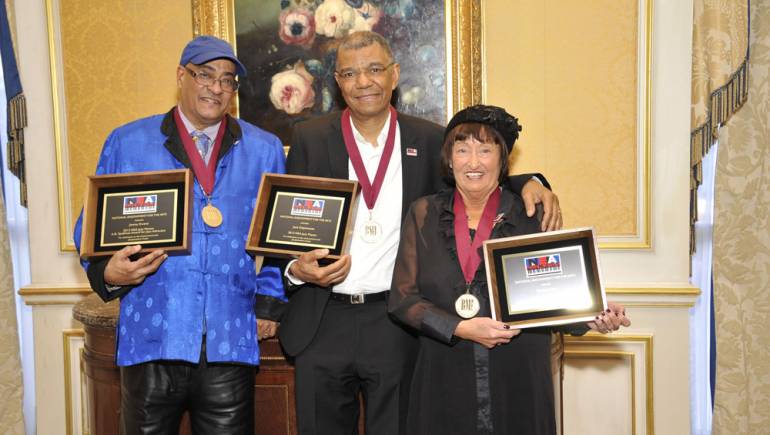 BMI partnered with the National Endowment for the Arts to host the annual luncheon toasting the 2012 class of NEA Jazz Masters on Tuesday, January 10. In a clear illustration of BMI’s storied commitment to jazz, all of the 2012 honorees are BMI creators: composer, drummer and keyboardist Jack DeJohnette; saxophonist Von Freeman; composer, bassist and educator Charlie Haden; and vocalist and educator Sheila Jordan; as well as composer, arranger, educator, trumpeter and flugelhorn player Jimmy Owens, who received the A.B. Spellman NEA Jazz Masters Award for Jazz Advocacy.

The celebration also marked the 30th anniversary of the NEA Jazz Masters Awards, recognized as the country’s highest honor for jazz artists. “Jazz has been in BMI’s DNA since we opened our doors in 1940,” said Charlie Feldman, BMI Vice President, Writer/Publisher Relations. “Support for jazz became an important part of BMI’s mission in those early days, and led us to sign a group of immensely talented young composer/artists who would define this art form for the ages, including Charlie Parker, Thelonious Monk, Max Roach, Miles, Coltrane and Sonny Rollins, among many others.

New York’s Jazz at Lincoln Center hosted an all star concert offering a musical tribute to the new class of Jazz Masters the evening following the BMI-hosted awards luncheon. At the gala concert NEA Chariman Rocco Landesman acknowledged BMI for its significant role in fostering jazz, and thanked the company for its tradition of partnership with the NEA in hosting the awards luncheon. A webcast of that concert, featuring more than a dozen BMI Jazz Masters, as well as the artistry of rising BMI star Kris Bowers, can be found at www.jalc.org.