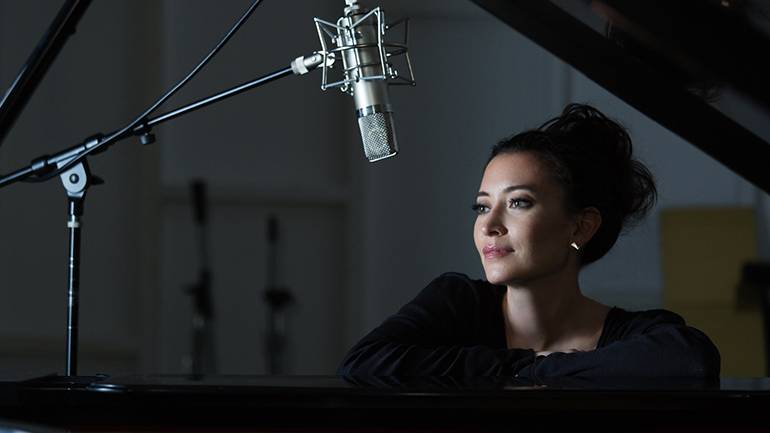 Renowned for her stirring scores to popular TV series like Riverdale, Blindspot, The Red Line, and, most recently, the gripping DC comics series, Batwoman, composer Sherri Chung is gaining a reputation comparable to the protagonist of the latter show — a fierce and talented champion.

Starting out by learning piano, Chung soon immersed herself in musical study, ending up at grad school at USC. As a versatile student of composition and theory, Chung began composing music for indie films before gradually rising through the ranks to earn bigger gigs. She’s composed songs and scores for television, films, documentaries, commercials, musicals and music libraries. Her work on 2017’s The Other Side of Home earned her a shortlisting for the Oscars for Best Short Documentary. Her recent work on Batwoman, meanwhile, earned her a prestigious commendation from Variety, who named her one of “Ten Composers to Watch.”

BMI reached out to Chung, during these trying times, to see how this ambitious composer, singer/songwriter and accomplished pianist is dealing with the current crisis, and how she’s staying inspired and creative. Here’s what she had to say.

You were just lauded by Variety as being one of “10 Composers to Watch.” Congrats! How did you react to this news?

What a great honor to be included on this list and among these other incredible talents!

Tell us a bit about your current work on the CW show, Batwoman. What do you like the most about working on this show?

Batwoman is yet another genius superhero show developed by Greg Berlanti, as well as writer and show-runner Caroline Dries. I’ve always felt that the superhero genre is in some ways a more challenging assignment for a composer because stories like these rely heavily on music to uphold the suspension of disbelief. Batwoman is well written, acted and produced, but we’re still making a story with mythical characters performing super-human acts in extraordinary situations that no mere mortal could really withstand. So I feel that the job of music is to fulfill the rest of that promise to the audience - make us believe everything about this world. This is also probably my favorite part about writing for the superhero genre. The music I write spans a range encompassing the entire human emotional landscape to the other-worldly superhuman experiences - from heroic and epic to emotional and heartwarming, from comical and lighthearted to something bizarre and unidentifiable.

With Batwoman in particular, one of my favorite parts of working on the show has been writing for this season’s biggest villain, Alice. It’s been huge fun developing her sonic and harmonic palette to follow and compliment her character’s arc of madness. She is complex in that she has a very vulnerable, human, child-like side juxtaposed with an incredibly violent, backwards, demented side. This dynamism really allows the music to explore sweeter delicate sounds that can be twisted and distorted, all in a sort of unsettling polyphonic harmonic context. For me the experience of writing her music is kind of an amalgam of a response to and a partnership with Alice’s character.

There’s been a great deal of trust from the producers which really gives way to a lot of creative freedom. A good thing, since there’s definitely no shortage of inspiration on this show!

How did the project The Lost Husband come about? Can you tell us a bit about the type of score you developed for that film and what the process was like?

The Lost Husband film is an adaptation of Katherine Center’s novel of the same name. Vicky Wight is both the director and writer of the screenplay, and brilliantly tells the story of a woman who’s lost her husband and, in need of a new start, moves herself and her kids to her aunt’s goat farm. I had worked with Associate Producer Blair Skinner on a previous project and was really excited to team up again on this film after having connected with its script.

When beginning a project, I like to write away from picture to gather my palette and develop ideas. At the time it was a guitar-forward score and, not being a guitarist, I chose to bring in some musicians during this part of the process for that reason, but also for the purpose of really understanding my own intentions for the musical direction. Conceptually, I wanted to give us the sense of “coming home,” while avoiding the emphasis that “home” had to be a farm. So using the guitar actually became more of a parameter or “rule,” if you will. It could only be used with something related to the main character’s arc regarding her new life on the farm, i.e. comedic moments, depictions of and reactions to farm life. Her internal evolution relied more on piano and string quartet, both chosen for their intimate and emotional ranges. Working with Vicky was an artist’s dream because our dialogue seemed to be a true conversation between creatives. Nothing was “wrong.” It was more of a quest to try and bring out more of “this” emotion, or lean into “that” feeling. It’s very motivating when your director collaborates with you as they do with their actors on set. There’s a trust and respect there that I greatly admire and appreciate.

What’s helping you stay focused on your composing during this complicated time? Are there any exercises you practice to keep in the creative mindset?

It’s been a little bit of a struggle, as I’m sure other artists have found. It’s helped me a little to still have some deadlines. I’m seemingly useless without them! But, in general, I feel like I’m trying to stay on a schedule as much as possible. I’m still going in almost every day to write something, even if it’s just a few bars of music.

I’m embarrassed to say how much my life resembled social distancing before the pandemic. Being forced to slow down my life has made me realize how many people I’ve lost touch with. Reconnecting with friends and family virtually has been a great way to let loose, blow off steam and remind myself where a lot of inspiration can grow from.

What advice would you share with composers looking to break into scoring? And also, what’s your best advice for creators to get through this tough time?

For composers looking to break into scoring… I heard some great advice recently: “Find what inspires you and study the heck out of it.” So if there’s a score, or part of a score that really excites you, then find the sheet music and dig into the harmonies and textures that make up that sound. Let that launch you into finding other scores that do the same. I think education of one’s craft is so important. It only adds to your collection of tools and toys for your sandbox. If film music school/courses are not an option for you, then search for the works of those who have come before us and study what they’ve done. And don’t be afraid to emulate them to learn how it’s done. It takes a long time to develop one’s own voice, to season and hone the skills. Just keep moving forward and things will happen around you.

Best advice for creators during this time: Hmm, I’m still working on this one! I believe it’s important for us to remember that we’re still creating even if we’re not outputting. Even when I’m not in the studio writing, I feel like being present in moments throughout the day is still fueling creation. Give yourself permission to gather inspiration. When it’s time to write again,there will be so much stored in the tank.