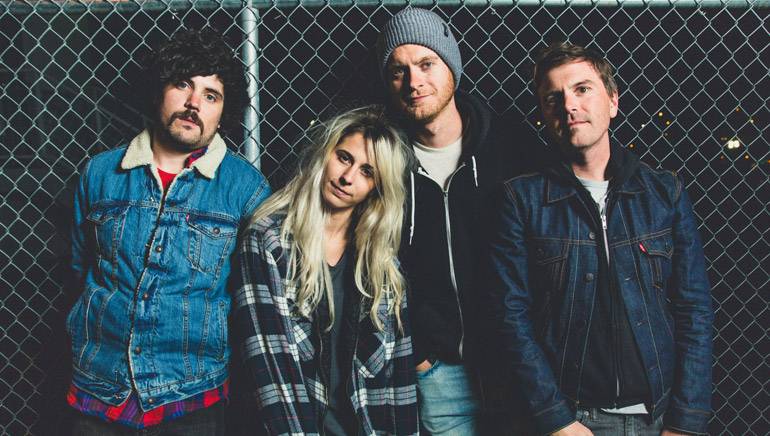 Alicia Bognanno is not afraid to be called insecure, intense or even insane. The singer-songwriter’s openness is her greatest weapon in Bully, the buzzy band that’s taking familiar ‘90s alt-rock (Dinosaur Jr, Pavement, Weezer) and turning it into smart, sharp-edged indie rock. The name Bully itself may not bring up warm and fuzzy feelings, but it’s an accurate description for the band’s sound, a mix of churning guitars, rambunctious rhythms, and tightly coiled intensity, created collectively by Bognanno, Stewart Copeland (drums), Reece Lazarus (bass), and Clayton Parker (guitar). It helps that Bognanno’s band mates encourage such openness. Heartbreak, memories, body image issues – these are all things she works through in song in a cathartic way. Beyond her role as chief vocalist and songwriter, Bognanno wears many other hats in Bully: guitarist, producer, engineer and all around visionary. Born in Rosemount, Minn., Bognanno moved to Nashville to pursue a career in audio engineering, and worked for various studios and music venues. It was in Music City that she met Copeland, Lazarus and Parker. Bognanno’s studio expertise, particularly with analog recording, came in handy when it came time to engineer and mix Bully’s debut album Feels Like (out now) at Chicago’s famed Electric Audio, where she once interned. In true Bully style, the album is deeply personal and embraces the sometimes messy yet necessary process of figuring yourself out. But therein lies Bully’s universal appeal. “Sometimes I wonder if people think I’m a complete mess,” says Bognanno. “It’s not easy to put yourself out there, but it’s true. Everyone goes through s–t like that.”