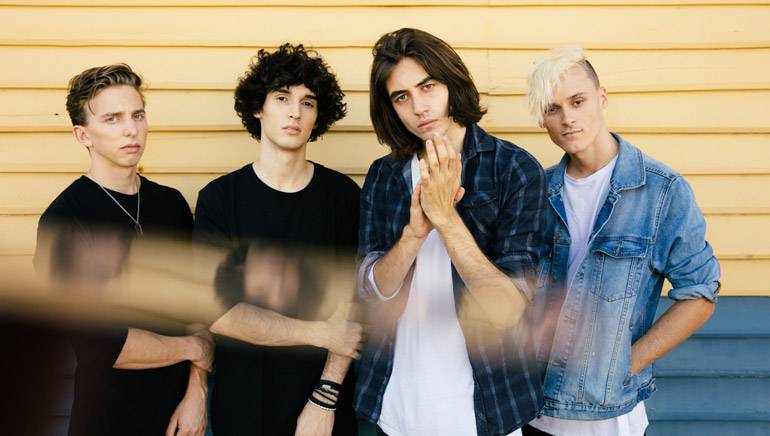 The Faim found fame seemingly overnight, but that’s not what their name is about. The members of the band, who hail from Perth, Australia, explained the moniker on Instagram: “The word ‘faim’ means hunger and we felt it truly represents our ever-growing and undying passion for music.” That shared passion began in 2014 when four high school friends—Josh Raven (lead vocals), Michael Bono (lead guitar/bass/vocals), Stephen Beerkens (bass/keyboard) and Sean Tighe (drums)—started to make music together. In an incredible stroke of luck, renowned producer John Feldmann (Blink 182, The Used, All Time Low) heard their online demos and invited them to Los Angeles to record a debut album. (Blink 182’s Mark Hoppus and Travis Barker lent recording and co-writing help.) The Faim now has a global contract with BMG Music, and Managing Director Heath Johns has said, “In The Faim, Australian music has a rock/pop export we can all be excited about.” The album’s first single, “Saints of the Sinners,” was penned with Pete Wentz (Fall Out Boy) and is a high-energy song with the potential to become an iconic anthem. One could argue it’s somewhat autobiographical, since the band told X-Press, “[It’s] about making your mark in the world, and not letting anyone stand in the way of where you want to be.” The song has crossed the 1-million streams mark on Spotify.

The Faim released their debut EP, Summer is a Curse (the title track of which has already earned nearly 6 million streams on Spotify alone), in September 2018, and have performed at several festivals around the UK including Download, Slam Dunk, and Reading & Leeds. Having opened for Sum 41, PVRIS, Against the Current, Sleeping with Sirens, Hands Like Houses, and Lower Than Atlantis, they will embark on their 29-date headlining tour across Australia, the UK, and Europe starting in January. While on tour, the band will prep their first full-length album, due in 2019.