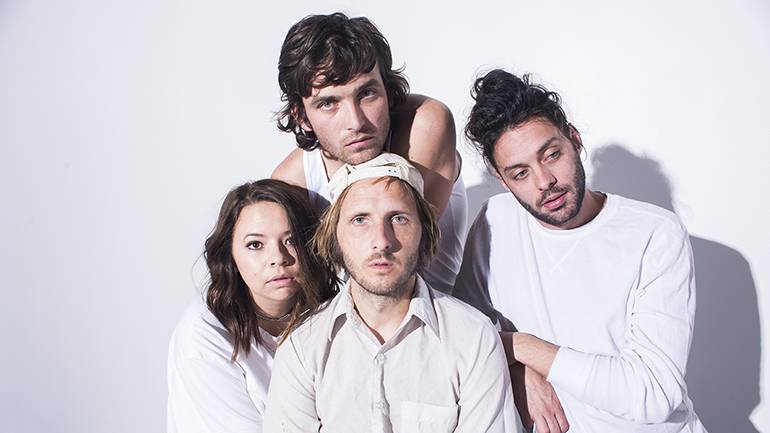 The raucous indie punk band, Sego, transformed from a duo into a four-piece band last year, and it shows in the best way possible. Now comprised of founding members, Spencer Peterson, Thomas Carroll, and newcomers, Alyssa Davey and Brandon McBride, Sego took the perspectives of four individuals and focused them into a modern-day punk sound that could actually be played on the radio. The Utah-bred, LA-based band shy away from “laptop studio” singles in favor of live instrumentation and raw lyrics that read more like riddles about absolutism and the state of the world today. They are serious about their craft, and like any introspective and philosophical group of musicians, they allowed their sound to be influenced by what they have seen while touring North America, the UK and Europe. Sego even stole away to a rural church in Canada to record their sophomore album, Sego Sucks, which was released in April and is gaining traction on Spotify (the single “Whatever Forever” is approaching 900,000 streams). While only on their second album, Sego continues to mature in their songwriting and adrenaline-fueled live performances, priding themselves on the diversity they see in their audience each night. They will take the stage at Bonnarroo, Summerfest, Float Fest and Austin City Limits this year while also headlining their own shows around the US.