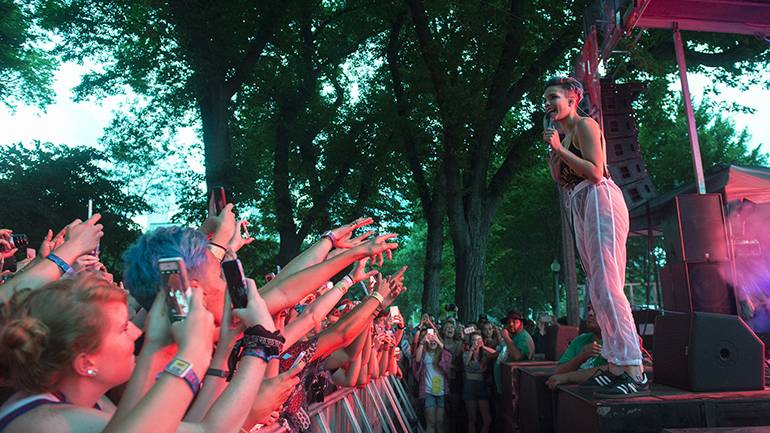 A little rain didn’t stop a turquoise-haired Halsey from giving an unforgettable performance on the BMI stage at Lollapalooza in 2015. At the time, she had only released one EP, but her on-stage charisma captivated the audience, foretelling a successful career boosted by catchy melodies, personal lyrics, and a devoted fanbase. It was no surprise then that she went on to sell out Madison Square Garden and launch her debut album, Badlands, at #2 on the Billboard 200. Halsey has toured with Imagine Dragons and The Weeknd, and her first #1 single, “Closer” with the Chainsmokers, dropped in July 2016. The song gave her one of two 2016 GRAMMY nominations, the other being for her work on Justin Bieber’s Purpose album. Her evolution continued upon the release of her 2017 hopeless fountain kingdom album, which featured hits like “Now or Never” and “Bad at Love,” and her 2020 album, Manic, was led by the smash hit, “Without Me.” Notably, “Without Me” became Halsey’s second #1 single and was named Song of the Year at the 2020 BMI Pop Awards. Her Billboard chart history is impressive: aside from her two #1 singles, she has placed 19 songs (including six top 10 hits) on the Hot 100, four albums on the Billboard 200, and 241 weeks on the Artist 100 chart, peaking at #1 in June 2017. Another remarkable fact about Halsey is that she has appeared in the top 10 of the Hot 100 every year since 2016. Manic remains one of the best-selling albums of the year, and her recent collaborations with Marshmello (“Be Kind”), Juice WRLD (“Life’s a Mess”), and Kelsea Ballerini (“The Other Girl”) are climbing the charts worldwide.