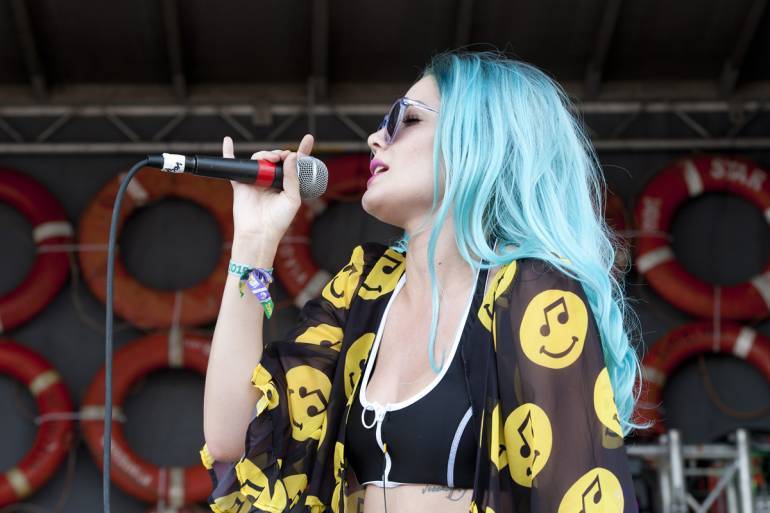 Since first appearing in the BMI Indie Spotlight in 2015, Halsey has ascended to absolute superstardom. At the time, she had only released one EP, but her on-stage charisma, catchy melodies, and personal lyrics ignited a devoted fanbase that is with her to this day. Her first full-length album, Badlands, debuted at #2 on the Billboard 200, and she sold out Madison Square Garden not long after playing the BMI Stage at Lollapalooza. Halsey’s first #1 single was “Closer” with the Chainsmokers, and her vocal talent and songwriting prowess led to collaborations and tours with artists like The Weeknd, Imagine Dragons, and Justin Bieber. Her 2017 hopeless fountain kingdom record featured hits like “Now or Never” and “Bad at Love,” while her latest release, Manic, remains one of the best-selling albums of 2020. The latter project spawned the smash single, “Without Me,” which topped the Billboard Hot 100, went 7X platinum, and won Song of the Year at the 2020 BMI Pop Awards. Her Billboard chart history continues to impress, with five top 10 hits on the Hot 100, four albums on the Billboard 200, and an appearance in the top 10 of the Hot 100 every year since 2016. This year alone, she has released bonus tracks from Manic along with collaborations with Marshmello (“Be Kind”), Juice WRLD (“Life’s a Mess”), Kelsea Ballerini (“The Other Girl”), and Machine Gun Kelly (“forget me too”). Halsey’s first book, a collection of poetry titled I Would Leave Me If I Could, was released on November 10.