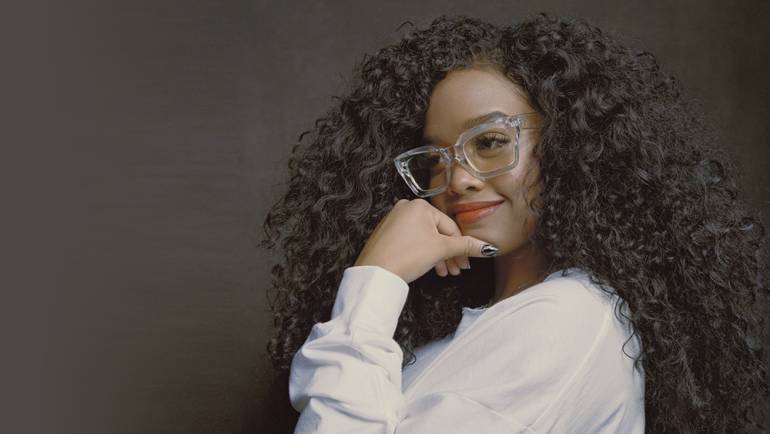 Since debuting in 2016, H.E.R.’s distinctive blend of smoldering R&B has been showcased on a string of EPs—later collected on a debut LP in 2017 that was certified platinum – and has earned her steady acclaim as a prolific creative force to watch. H.E.R., which stands for “Having Everything Revealed,” has also collaborated with artists like Toni Braxton, Khalid, Snakehips, Alex da Kid, Jess Glynne, Ella Mai, Chris Brown, Ed Sheeran, Bryson Tiller, YG and many others. A two-time GRAMMY award-winner and multiple GRAMMY-nominee, H.E.R.’s career heading into last year was already in full swing.

A California native, H.E.R. released eight singles during the course of 2020, including “Slow Down,” which is nominated for a GRAMMY Award for Best R&B Song and “I Can’t Breathe,” a stirring response to the Black Lives Matter movement that is also a GRAMMY contender for Song of The Year. Moreover, her collaboration with pianist Robert Glasper, “Better Than I Imagine,” is also up for a Best R&B Song GRAMMY.

Adding on to her accolades, H.E.R. made a stunning appearance at Super Bowl LV, performing a soaring rendition of “America The Beautiful” that revealed her dynamic skills as a guitarist. Now three months into 2021, the busy singer/songwriter is gearing up for further recognition for “Fight For You,” the song she recorded for the soundtrack to Shaka King’s Judas and The Black Messiah. The track earned a Golden Globe nomination for Best Original Song, has a pending nomination for Best Song at the Critic’s Choice award and is shortlisted for an Oscar.

In the midst of all this excitement, BMI caught up with H.E.R. to see how she’s dealing with it all. Here’s what she had to say.

You’re nominated for multiple GRAMMY awards, and for the song “Fight For You” from Judas and the Black Messiah, you have been shortlisted for an Oscar and received Golden Globe and Critics’ Choice nominations. How are you feeling about being part of this award season?

I feel honored to be a part of this award season.  The songs really represent a movement and a shift in the culture and in the world, so it’s an honor to be recognized for lyrics and melodies that express pain and hopefully lead to change.

How did you get involved with writing “Fight For You” for Judas and the Black Messiah? What drew you to this project?

I received a call from Archie who works with RCA and was part of the movie, and I was really excited when I got the call because of Fred Hampton’s story and the Black Panthers. That era is one of my favorite times in music and I knew that it was something I would have fun making. It was also a learning process for me because of what I didn’t know about the story of Fred Hampton. In making “Fight For You” for the movie, I knew I had to make something that connected the past to the present.

What does songwriting mean to you?

Songwriting means creating a diary through melody and an outlet when you can’t necessarily say what you feel. It means the world to me. Songs are there when no one else is.

The last year has been extremely challenging, but you’ve stayed very busy….  releasing your powerful single, “I Can’t Breathe,” performing “America the Beautiful” at the Super Bowl and now this. What’s your secret to staying focused and productive?

My secret to staying focused and productive is remembering why I do this. Even without the accolades and the recognition or these big stages, I would still be doing music and that’s what drives me. But I also know this is just the beginning of my career and there’s so much more that I have yet to accomplish. And the work is fun for me.

Can you tell us a bit about your creative process?

My creative process usually starts with a conversation either with myself or with my collaborators, and sometimes I like to jam, or sometimes there are chords that speak to the lyrics or the conversation, and then I just flow.

You seem to effortlessly switch gears from songwriting, recording and performing. What’s your comfort zone and why?

I think performing is a comfort zone but being in the studio is a comfort zone. I really can’t pick one because in all those areas I’m expressing myself and there’s nothing more comfortable than that.

Can you share your best advice for aspiring music creators?

Put your all into what you create, even when you think it’s not good, get it out anyways. We are our biggest critics and sometimes it’s hard to see things for what they are but continue to believe in yourself and put your heart out there for the world to receive, and you never know who you’ll touch.

You’re becoming renowned as a guitarist to watch, and even have your own Fender signature guitar. Who are the guitar players that most influence and inspire your style?

You recently joined BMI. How would you describe the relationship?

It’s a new one, business-wise, but it’s with some old friends like Omar Grant and Wardell Malloy, so I’m excited about it.