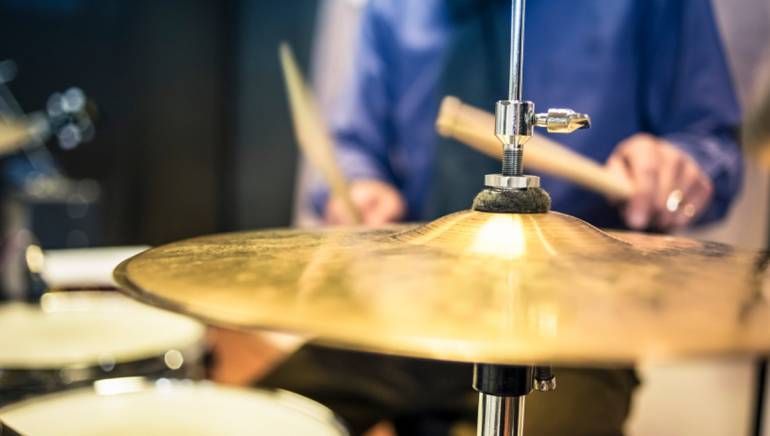 Put a Shure microphone in front of a guitar amp, or a good condenser near the sound hole of a Martin dreadnought, and nine times out of 10 the results will be top-notch. A quality drum sound, on the other hand, can be a bit more elusive, in part because there are so many variables involved—the type of drummer, the style of music, size of the room, proximity to other musicians, etc. Consequently, a miking scheme that worked nicely on one session might be totally useless on another.

I should know, because even after years of toiling in my subterranean laboratory, I still struggle to achieve the kind of drum sound that my professional mentors seem to get at the drop of a (hi) hat. Which is why I find it helpful to periodically review the list of strategies for preparing a drum kit for action.

When recording a drum kit, tradition supports the use of dynamic microphones (which can handle the higher volume—as well as the occasional stick bashing). These include the Shure SM57 for the snare drum, Sennheiser MD421 for the toms, ElectroVoice RE-20 or AKG D-112 for kick drum, as well as condenser mics for overheads (Neumann U87 if you’re wealthy, a plausible knock-off like the RODE NT-2A if you’re not). On the other hand, I recently heard a pretty decent-sounding drum track that apparently was the product of one $25 Rock Band 3 microphone. So whatever works.

Though we certainly don’t lack for track space anymore, using a lot of mics doesn’t necessarily guarantee a better drum sound. Most of the hottest-sounding rock records from the ‘60s and beyond utilized only one or two mics on the drums; for the Black Keys’ 2010 breakout effort Brothers, producer-engineer Mark Neill made do with just three—one mic out front, one in the vicinity of the floor tom, and another for the bass drum. “Similar to the arrangement that [veteran engineer] Glyn Johns has used,” says Neill, “and of course, we know how well that’s worked for him!”

It’s much more difficult to get a good drum sound if you’re using bad-sounding drums. Before you even begin wiring up microphones, start by making sure that the entire kit is properly tuned. Beginning with the resonant or bottom head of each drum, fully loosen all the lugs, then pick a lug and tighten it to a certain degree, adjust the lug on the opposite side in the same manner, and continue this pattern until the whole drumhead is complete. The bottom head is typically tuned higher than the top, as this allows the shell to ring to its full potential (traditional jazz players who want a more muted sound often do the reverse). To eliminate unwanted overtones, use dampening material such as Moongel, muffling rings or even duct tape. Also, be sure to replace worn heads when necessary.

A rhythm track is useless unless it has sufficient bottom; therefore, start from the ground up by focusing on the sound of the bass drum. Removing the resonant head allows you to place a mic directly inside the drum a few inches from the beater, which helps boost the articulation of the drum. For a roomier sound, you could pull the mic farther away from the bass drum (though still pointed in the direction of the beater). Pillows, blankets or foam stuffed inside the shell shapes the overall sound while also reducing unwanted boominess.

A convincing snare-drum sound is arguably the most challenging part of the job. While there are no hard and fast rules, engineers typically rely on a number of methods, including: close miking the snare drum in combination with a stereo or mono overhead; all of the above with the addition of a microphone placed beneath the drum (to capture some of the actual snare sound); none of the above with the exception of a single microphone placed over the drummer’s shoulder and pointed toward the center of the snare drum; a single microphone placed several feet in front of the kit and aimed just above the bass drum.

Celebrated artist-producer-engineer (and drummer) Todd Rundgren has some definite opinions on this matter. “I rarely use a mic underneath,” he says. “Instead, I just pull the snares far enough off the drumhead so that the snare sound is audible. Also, you don’t want to point the direct mic straight down at the drumhead because you probably won’t capture the true sound of the drum that way. Therefore I try to keep the mic far enough away from the rim so that you can get some of the bottom sound, without having to put a separate mic underneath.”

Toms are a bit more forgiving; usually one microphone per drum (or a single mic for a pair of rack toms) suspended a few inches from the rims will work just fine. Applying a bit of tape (or some thin toweling) to the heads is key to getting more of a vintage vibe.

Conventional wisdom holds that larger rooms with higher ceilings are better for drum recording (since there is more air to move above and around the kit). However, some take the opposite tack; the signature thump heard on early Rundgren records like “I Saw the Light,” for instance, was the product of a relatively small drum booth. “That kind of space really contributed to the immediacy of the drum sound because it had just the right level of absorption versus ambience,” says Rundgren. “Particularly if you have someone who’s a real basher, the reflections from the cymbals and other noisier instruments can often get in the way if you don’t have the proper room to soak up the excess sound.”

Despite all of the different techniques, tools and technology, without a doubt the most important element when seeking great drum tracks is using a great drummer. “Engineers often make the mistake of thinking there’s something special about the craft of recording,” says venerable producer and engineer Niko Bolas, “when in reality, engineering is just a mechanical process. You could have someone like [session drummer] Steve Jordan banging away on a shoe box—and no matter what you did, you’d still wind up with the best drum sound you’ve ever heard!”