Posted in MusicWorld on March 3, 2010 by Bruce Britt 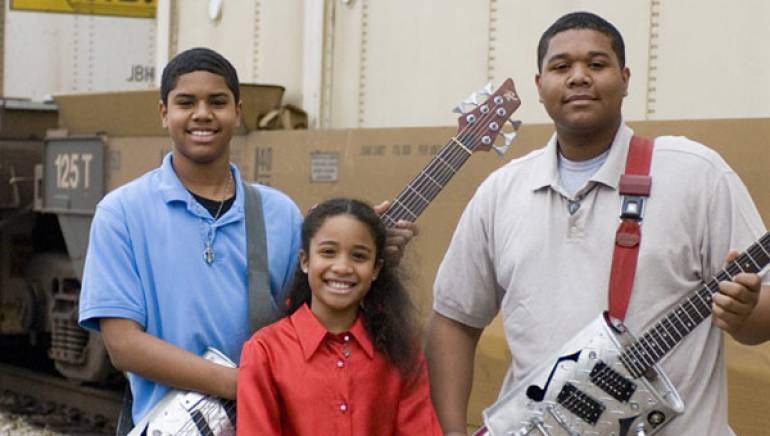 Ryan Perry was stoked. Minutes before his scheduled interview with BMI MusicWorld, the 17-year-old singer, songwriter and guitarist completed his latest tinkering project—an electric guitar built from a cigar box. “We just put the finishing touches on it five minutes ago,” Perry said. “We plugged into the amp and it works fine. We used a buzzer from an alarm clock for the (transducers).”

The guitar assembly project is just the latest jaw-dropping achievement for Perry and his two siblings, who together make-up the under-18 trio known as the Homemade Jamz’ Blues Band (HJBB). Featuring Ryan on lead guitar and vocals, 14-year-old brother Kyle on bass, and 10-year-old sister Taya Perry on drums, the home-schooled group composes and performs original songs that skew towards the funkier, more contemporary side of the blues. HJBB tours regularly on the festival circuit while constructing many of their own instruments from auto parts and other scraps lying near their Tupelo, Mississippi home.

Lest you dismiss the Perrys as a novelty act cruising along on youthful charm, consider that the HJBB have been vetted and hailed by some of the world’s most prestigious establishments. The group was named 2008 Best New Artist by the Bay Area Blues Society’s West Coast Hall of Fame, and took second place (band category) at the 23rd International Blues Challenge. Their albums Pay Me No Mind and I Got Blues For You have been featured in USA Today and Billboard, and showcased on TV shows including CBS Morning News and Today. “These young kids have got energy, talent and do the blues proud with their own flavor,” said none other than BMI blues legend B.B. King.

Yet despite their formidable skills and achievements, manager (and mom) Tricia Perry told BMI MusicWorld that she constantly battles skepticism. ”Because they’re at a young age playing the blues, I really have to work hard to make sure that (concert promoters) know that they can pull this off,” she said.

The kid’s friends are an easier sell. With awards and acclaimed albums to their credit, friends have taken to calling the Perry siblings “rock stars.”