Posted in MusicWorld on August 26, 2008 by Rob Patterson 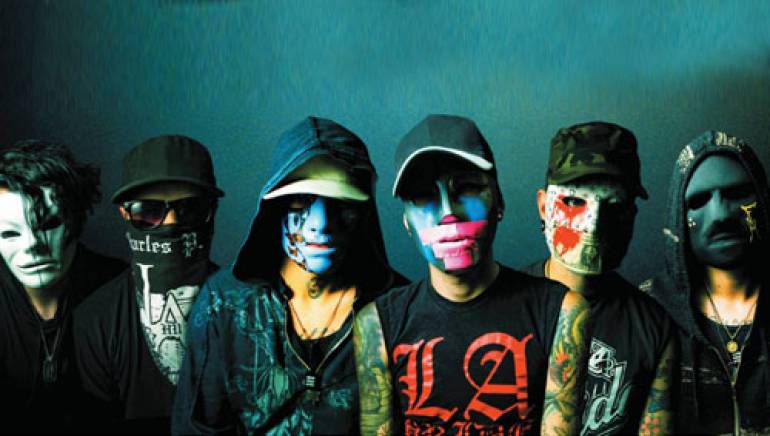 The group may be called Hollywood Undead, but they’ve proven that music is very much alive in the digital age. When they first put up their music on a My Space site, they jumped from 10 friends to thousands in just one day. Within a week, they hit #1 on the My Space top bands chart, leaping ahead of such established acts as Nine Inch Nails, Coldplay and System Of A Down.

They eventually added almost half a million friends and have racked up some 400,000 plays on the popular social networking site. Hollywood Undead also won Virgin Mobile’s “Book The Band” contest, earning some 285,000 votes — more than 53% of those cast — to land a slot at this year’s Virgin Mobile Festival as their first live show. And they achieved it all without yet even releasing an official album.

As the name indicates, Hollywood Undead hail from Los Angeles. The band started out as a musical project by group founders J-Dog and Tha Producer, and have since come to be known as a musical gang that now includes Charlie Scene, Johnny 3 Tears, Funny Man and Da Kurlzz. In addition to all of its members bearing monikers, the Hollywood Undead also wear masks to conceal their true identities.

But whatever they may call themselves, Hollywood Undead are certainly savvy and streetwise club kids who mix metal, hip-hop and rock with a brash panache. Songs like “No. 5” and “Los Angeles” draw from the underside of the City of Angels, and the former was included on the first My Space compilation album. With such a large and devoted fan base already behind them, Hollywood Undead are destined to jump into the big time once they release their debut CD on A&M/Octone Records.