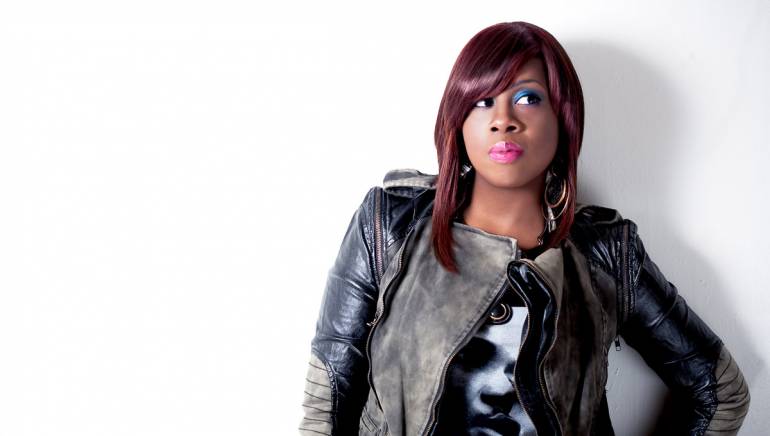 Anaysha Figueroa-Cooper likes to tell the story of her first encounter with music. It takes place, like most special moments in her life, at the New Life Tabernacle in Brooklyn, New York. Her older sister, Timiney, had been singing right before her father, Bishop Eric Figueroa, started preaching. The familiar sound awoke Anaysha, who was asleep on her grandmother’s lap. “I woke up and I told my grandmother, ‘How come my daddy never asks me to sing?’ And my grandmother got my dad’s attention and she said, ‘Anaysha wants to sing; you never let her sing.’ I guess they’d heard me sing around the house, but they thought I’d be afraid to do it in front of people. I remember I got up and me and my sister sang a song called ‘I’ve Decided to Make Jesus My Choice.’ I was two years old and I pretty much have not looked back since then.”

Through the years, Anaysha’s beautiful soprano voice has continued to flourish, as heard on “Holy One,” the lead single off EOne Entertainment’s gospel album, BMI Trailblazers of Gospel Music Live 2013. The single - and the forthcoming album - were recorded live on January 18 at the 14th annual BMI Trailblazers of Gospel Music Awards Luncheon in Nashville, an event that honors outstanding gospel music recording artists and individuals who have contributed to the ministry. The next one will be taking place on January 17, 2014. This year, BMI brought together some of gospel’s most prolific singers to pay tribute to three icons of music - Edwin Hawkins, Tramaine Hawkins and Kurt Carr. Inviting Anaysha, whom BMI Vice President, Writer/Publisher Relations Catherine Brewton calls a “powerhouse vocalist,” was a no-brainer. Her interpretation of “Holy One,” which was first made famous by Tramaine Hawkins, leads the release of the album, slated for digital and street release on October 22. You can now pre-order the album on iTunes and Amazon.

When asked what it meant to her to pay homage to Hawkins, Anaysha needs a moment to collect her thoughts. “When I found out that the song I was going to do was ‘Holy One,’ I got so nervous,” confesses Anaysha. “But the day of the luncheon the spirit of God was so heavy in the room that it was kind of undeniable. God had chosen me for that moment. When I found out after the luncheon that it was going to be on an album, that in itself was enough for me. I didn’t find out until after that that ‘Holy One’ was going to be the lead single and that really blew me away!”

At the luncheon, Anaysha worked up the courage to introduce herself to Hawkins. Their encounter only reaffirmed that she’s on the right path. “I went to her and on top of just expressing my love for her voice and her music, which is so timeless, I told her, ‘I hope I didn’t disappoint you.’ And as soon as I started to open up my mouth, she just grabbed me and held me and told me that I made her proud and that I made God proud. And she just prayed for me, that God would orchestrate the rest of my career and that’s what he’s doing.”

As with many gifted singers throughout history, growing up in church has shaped Anaysha, musically and spiritually. But the New Life Tabernacle is no ordinary church. Renowned for the unique sound and hip-hop swagger of its choir, the church regularly welcomes new members, all while continuing to produce great gospel singers like Anaysha, her sister, Timiney, her father, Bishop Eric, and mother, Lady Doreen Figueroa, who bring the church’s message to the world. “I am the same age as my church [24], so I literally took my first steps in my church and there is no place on earth like it,” says Anaysha, who is one of the ministers of music at her church. “We’re more of a Pentecostal church and we kind of believe in being really, really expressive about our love and our passion for Christ. I believe a lot of my blessings have come from being loyal and being committed to my church.”

When Anaysha talks about her blessings, she is referring to, among other things, the chance to travel and record with world-renowned gospel artist (and fellow BMI member) Kirk Franklin as a one of his featured singers. “These past eight years have been the best years of my life, honestly,” says Anaysha of working with Franklin. “Maybe I’m biased, but I just believe he’s the best. Before I started to work with Kirk, I’d never really been in an environment where there were like 20 other people who are equally talented - and in some cases, more talented - than you, and I think it takes a really special person to be in that environment and still be learning.”

Prior to working with Franklin, Anaysha toured and collaborated with Alicia Keys, John Legend, Whitney Houston, John Mayer, Kim Burrell, Ledisi, Israel Houghton, Donnie McClurkin, John P. Kee, Marvin Sapp, James Fortune and Fred Hammond, to name a few. Her time spent with Keys was particularly memorable. “With Alicia, it was her work ethic that I learned from,” says Anaysha. “She never really took breaks and she never took no for an answer. She was always very hands-on, and it taught me the kind of woman that I wanted to be, as far as being hands-on in my own career.” Parting ways with Keys in order to join Franklin’s choir wasn’t an easy conversation to have, but Anaysha followed her heart. “I did get a chance to talk to her and I told her, ‘I’m sorry, I hope you’re not mad at me for leaving.’ And she told me, ‘Don’t you ever apologize for following what’s in your heart, for doing what you know you’re supposed to be doing,’ ” says Anaysha. “I was with her for four or five years, I had some good times there, but when Kirk called it was like God was calling me to move to the next phase in my life,” she adds.

While she continues to travel with Franklin, Anaysha is also looking to step into the spotlight as a solo artist. Currently, she’s putting the finishing touches on her debut album, due next year on Light Records. “I think that what makes gospel music stand out is that we carry a great message and that message – unlike any other genre of music – is a message of hope, it’s a message of love, of God’s love in particular. The emotion in gospel music you can’t get from any other type of music.”

Follow us on Twitter (@BMI) and keep the conversation going about Anaysha and the new #BMITrailblazers album.