Posted in MusicWorld on February 22, 2006 by Bruce Britt 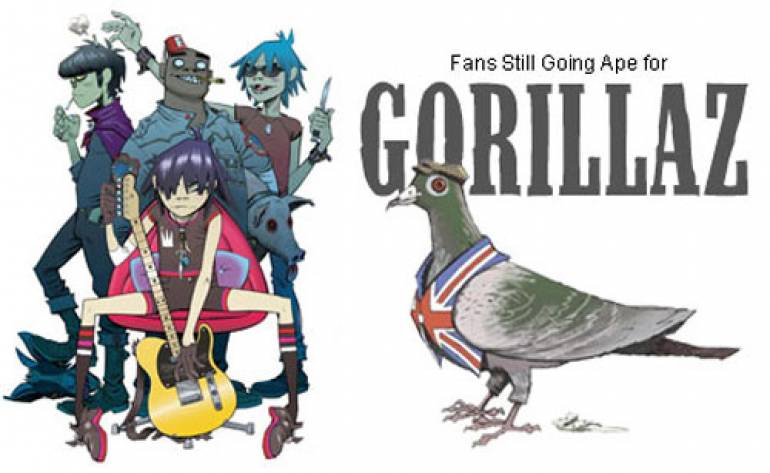 Just when music lovers thought they had seen it all, Gorillaz surfaced in year 2000 and redefined the art of pop high conceptualism.
The multimedia brainchild of Blur frontman Damon Albarn and comic illustrator Jamie Hewlett (“Tank Girl”), Gorillaz billed themselves as the first “virtual hip-hop group.” Translated, that meant Gorillaz was a recording group in the truest sense of the phrase.
Not only did the quartet rarely tour, they maintained an ever-alternating line-up (including alt-pop heroes like Dan “The Automator” Nakamura and Tom Tom Club’s Tina Weymouth and Chris Frantz, among others). To further deepen the mystery, the group promoted itself in music videos as a quartet of multi-racial, post-apocalypse cartoon characters named 2D (Albarn), Murdoc, Russel and Noodle.
In fact, Gorillaz was so high-concept, industry odds makers didn’t know how to handicap the group. So imagine the surprise when Gorillaz’ self-titled debut album became a worldwide smash, selling over a million copies in the U.S., and capturing countless music video awards and nominations worldwide. Appropriately enough, Albarn’s curious side project drove music fans ape.
Gorillaz recently returned with their sophomore album, and though the lineup is almost entirely different, the sound and images are as compelling as ever. With Albarn still commanding the helm, Demon Days features major contributions from DJ Danger Mouse, the notorious mixer who “mashed” the Beatles’ White Album and Jay-Z’s The Black Album into The Grey Album. Rounding out the Demon Days cast is Blondie’s Debby Harry, De La Soul singer Shaun Rider (Happy Mondays), and Easy Rider actor Dennis Hopper.
Calling Demon Days a pastiche of “art pop, hip-hop, dub and dance,” Rolling Stone magazine posed the rhetorical question… “Four years after Gorillaz’ debut, is Damon Albarn’s cartoon side project still worth the shtick? The answer is a qualified yes.” Pitchfork.com simply gushed: “Demon Days is better than it has any right to be.”
Recently, Albarn announced plans to assemble the entire cast of Demon Days for some upcoming concert dates. The rumored jaunt would be no small feat, considering the scheduling nightmares that will surely result from trying to assemble such a diverse team.