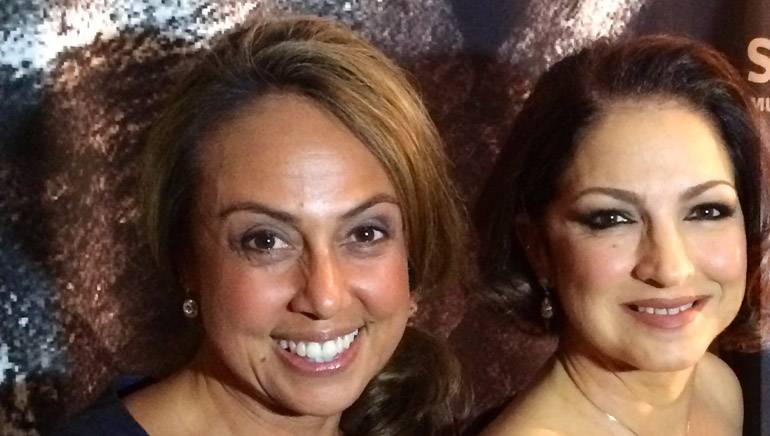 It was an evening lit from within: the stellar accomplishments of several BMI singer-songwriters were feted at the Latin Songwriters Hall of Fame (LSHOF) awards show on Saturday, October 18, at the Ritz Carlton South Beach Hotel in Miami Beach, Florida.

The brightest star was Gloria Estefan, whose musical career was celebrated via tribute performances of her greatest hits, including one from BMI singer-songwriter Jon Secada and Ednita Nazario, joined by a gospel chorus, as they delivered a majestic version of Estefan’s “Coming Out of the Dark.” Later, during her acceptance speech, Estefan underscored the relationship between songwriting and inspiration: “Everybody remembers who sang the songs, but not everybody can answer who wrote the song. So, to everyone in this room that inspired me, because music got me through some of the toughest moments of my life — the biggest blessing for me is when someone tells me that my music has helped them through a tough time, helped them tell their loved ones they love them, or just comforted them. Music got me through some really, really tough moments, and I am so honored and blessed to be here tonight among these amazing honorees. Thank you!”

For others, their award was a way of coming full circle. BMI songwriter Marlow Rosado, who received the La Musa Elena Casals Award, actually penned and produced songs with the legendary Casals, from whom the award gets its name. Casals was also a BMI singer-songwriter and the mother of Desmond Child, one of the founders of the Latin Songwriter Hall of Fame Awards.

The LSHOF, founded in 2012 by legendary writers Child and Rudy Pérez, works to “educate, preserve, honor and celebrate the legacy of the greatest Latin songwriters from all over the world.” Created under the auspices of the Songwriter’s Hall of Fame, its nominating committee is comprised of songwriters, performers, musicians, producers, engineers, music critics and industry executives.