Posted in MusicWorld on December 15, 2014 by Nina Pacent 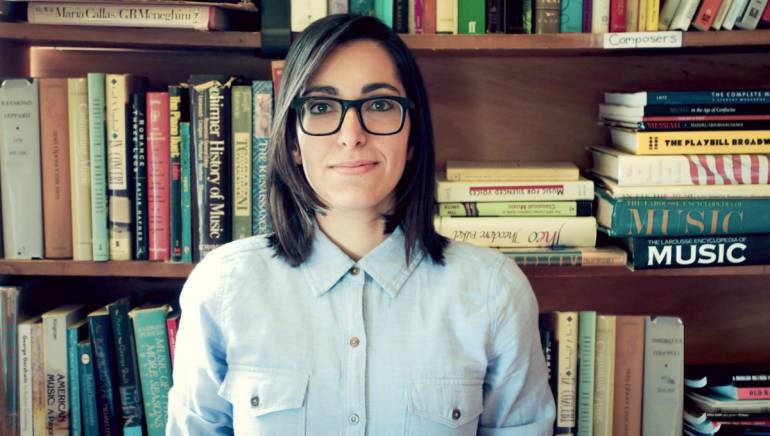 “Fiercely independent, but in an unassuming way” is what anyone watching or listening would say about Michelle Chamuel. From her three-chair turnaround for her cover of Katy Perry’s “I Kissed a Girl” on NBC’s fourth season of The Voice, to her latest single, “Face the Fire,” the sneaker-and-glasses-clad Chamuel puts everything she is into both her music and her demeanor. The daughter of Jewish refugees who came to the U.S. in the 1960s from Egypt, Chamuel started her musical career early on with piano lessons at age four and violin lessons given by her father, both of which led her to producing a full-length CD during her senior year of high school in 2004.

Today, just about a decade later, Chamuel is both “The Reverb Junkie,” her producer moniker for her solo electronic project “All I Want,” (which hit #6 on Billboard’s Dance/Electronic Albums chart) and her pop counterpart that earned her the runner up spot on The Voice. Her single “Go Down Singing,” co-written and produced by fellow musicians Theo Katzman and Tyler Duncan and released after the show in 2013, climbed to #22 on the iTunes Chart. Her performance of the signature song at the end of her recent tour in Nashville made it easy to see why Chamuel won the hearts of so many on The Voice and why she will always go down singing and enjoying every moment of it regardless of where it takes her.

BMI caught up with her a few days after that performance at the High Watt to find out how she makes her look, her sound and her message work so well.

You had to sing all covers on The Voice. How do you take someone else’s song and make it believable? Is it something that you identify with either melodically or lyrically?
I would liken it to acting, but differently so, in that you’re your own version now of this character singing these lyrics and feeling these things. I think it’s important to be paired with a song that you can already relate to and that doesn’t, Iike, piss you off. That would be hard to sing a song when you just didn’t believe it. Finding something to connect you and becoming your own version of that character, for me, is helpful.

You’re very much your own person. Do you find that easier or harder after The Voice?
That’s an interesting question. I feel like there is no choice for me but trying the best I can to be me, so being anything else other than that would be very difficult. I’m hoping that with every day that passes and with everything that I experience that I’m able to more easily be myself. I feel like you take an opportunity like The Voice and everything with it. You could get lost in the expert opinions of who the best version of yourself is. I think for me The Voice was definitely an opportunity to try to figure that out.

What do you think it was that turned three chairs during your second audition after an unsuccessful audition a year earlier? How did you prepare for the second, and what advice would you give to other artists and songwriters, based on that experience?
The first time I went on the stage I really put a lot of pressure on myself to either accomplish something or to be something or to fit into some category. And after being a drill sergeant with myself, and getting sick and auditioning with the flu and just not having a lot of fun in a situation that could have been a lot of fun, I learned that what matters is not the end goal, as much as the right now. So if you have a fun audition and you don’t make it, I’ve learned that I will be happier and feel better than if I had a not fun audition and I made it, because out of all the scenarios, if you have a good time, you have a good time whether or not you get to the next stage or not. If you’re doing your thing, right now, then at least you’re confident of that.

Tell us a little about the music you do under the moniker ‘Reverb Junkie,’ as opposed to what you do under your given name.
The Reverb Junkie has been around for a lot longer than Michelle Chamuel has and it’s more of an indie-electronic type of project. I just produce and do everything to my heart’s content. There’s a lot of craft that goes into it that’s different than the type of craft that goes into the Michelle Chamuel stuff, which has a pop type of craft that’s designed for people to be able to hear it and for it to be accessible. All the Reverb Junkie stuff is more demanding. When you listen to it, I’ve crafted it, but not necessarily so that upon first listening, is it easy to understand.

That’s a great answer. Do you think that being a successful music artist, singer or writer is innate, or can it be learned? And if so, how do you go about learning it?
That’s a very interesting question and patches right into something I’ve been thinking about a lot: What is a successful artist these days? I think it keeps changing and I don’t actually know the answer yet. So, I’m going to say it can be learned. Because, I’m still learning what that is.

For the tour, I was playing electric guitar as a bass and I have been learning a short-scale electric bass, too. So that’s a lot of time, for several hours, practicing everyday of the last month and a half. If you want to do something musically, you have to practice it. There are no shortcuts. At the same time, that’s what I mean about success. Like, what is success? I can now play this note on bass. Am I a successful musician? Or an artist? Versus, okay, let’s say I didn’t practice that, but I sang and got nominated for a GRAMMY, and did not learn any new musical things. I mean, what is success? If I take on a second gig, to support myself, because I’m making this art that isn’t super mainstream but I’m really happy, am I a success? Versus, like, selling platinum records; what is success these days? I’m not sure; I’m still trying to figure it out. And I think the more artists I meet, the more people I meet, the answers just keep multiplying. I’m still not sure what the definitive version of that is.

Do you do other types of writing besides songwriting?
Yeah, a lot more instrumentally. I’m not sure some of that stuff is really songs, more like pieces. Does doodling count? I do have a children’s book that I’ve been working on for many years now. Someday I’ll finish it.

You’ve said you like being independent because it gives you freedom, but you like collaborating. What are those relationships like?
Well, my most default way of writing and the way I started writing, from the get go, is to have an instrumental track, whether it is one that I make, or one that a collaborator makes. Then I get to kind of hear the story in the music and write a song over it, and then together, we’ll finish a song instrumentally and work out certain lyric patches. But me handling the vocal production, the melodies, the storytelling, that stuff is what I’m most comfortable with, so I have a lot of freedom in that. I think as I get more into creating the tracks as well, writing everything from scratch, it’s super free. But you’re almost so free that you can only move really slowly. I can only do one thing at a time, and I’m handling all of it. So collaborating, I can be really free in one smaller section, which in some ways is less free. When you work on your own, you have to do it all, so you can’t move as fast or go as far out, necessarily. But, inversely, you can think of all the ideas. So, they’re equally free and they’re equally not free.

What is the biggest misconception people have about you?
I think, thanks to the show, people think I am probably more succinct. I mean, I rambled a little bit, but I actually overthink things a lot and talk quickly. Because it’s a show they can cut it down for a few good sound bites. But for every good sound bite that they had there’s probably, like, an hour of footage of me getting there.

What would you most like people to take away from one of your songs?
The songs I write, and I’ve always written, are to be good company. So when I was little, as an only child, music, I took it everywhere with me. We didn’t have pets or anything so I would just carry this radio around that was battery operated and if I didn’t get service I would actually tape songs, or tape the radio. I’d always have a cassette player nearby, so I could tape things or play things. There was always music; it was a companion. And so, later on in life, I started writing actual songs to be companions for me, and other people’s music has served that same way for me as well. I remember the first time I heard Frou Frou’s “Let Go,” I actually played that song like 100 times on repeat everywhere and I just felt like a friend was with me, you know, processing something. You’re not alone when someone else has the same feelings as you do, so I really want the music I make to function that way for other people, too.

Tell us about your upcoming projects and touring.
Right now I’m on the Turn it Up tour as Michelle Chamuel, and we’re doing a couple Reverb Junkie tracks here and there, as a surprise, but now that I said it, it’s not a surprise anymore. And the tour is a two-leg tour. I just finished the east coast run and am about to head out on the west coast. I believe we have eight shows on the west coast and starting December 2, I’ll be playing in Seattle and then making my way down to Texas and back up to Chicago. And yeah, playing a lot of tunes from the album Face the Fire, which comes out in 2015. At the same time, I’m still doing a lot of writing in between that, so trying to keep the music coming.

Why did you decide to join BMI?
We decided to join as a band. Everything checked out. I mean to us, without a deep education of the industry, you know, the PRO you begin with may not be the PRO that you find yourself aligned with many years down the line. So I joined BMI being like, cool, this is the one that looks like the best fit for us at the time, and then, several years later, developing relationships with people at BMI, like Brandon (Haas) and Samantha (Cox), and finding out what the company really is, now that I’m working with it, that’s the reason why I would stay with BMI.