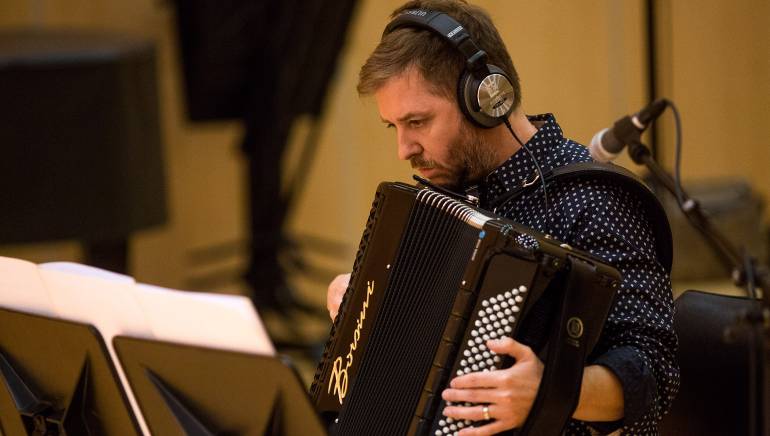 The breadth of Atli Örvarsson’s music is as vast and captivating as the Northern Lights are over his home country of Iceland. As a composer, he provides the edge-of-your-seat scores to the immensely popular NBC TV series Chicago Fire, Chicago PD and Chicago Med. He also wrote the 2016 HARPA Award-winning score for the Nordic film Rams, which won the Un Certain Regard Prize at the Cannes International Film Festival, and which was also featured at the Sundance Film Festival earlier this year as a must-see (and must-hear).

This depth of creativity may be because his greatest influences are diverse and yet connected - J.S. Bach, Pink Floyd, Ennio Morricone and Trevor Horn. Now, this inspirational composer whose credits also include the Pirates of the Caribbean series, Angels and Demons, Babylon A.D., and Thick as Thieves, is giving us two more reasons to perk up our ears… his score to The Edge of Seventeen, which will close the Toronto International Film Festival on Sept 17, with a highly anticipated release in theaters November 18, and the animated feature film Bilal: A New Breed of Hero.

BMI jumped at the opportunity to interview Örvarsson, and when we asked him about scoring, his love for it was contagious. Get ready to catch the buzz.

Tell us about your choice of instruments when scoring. In Rams, you featured an accordion. Do you think that was taking a risk or did you know right away that was the right choice? Does the success of that score inspire you to reach even further in your new projects?

For Rams, the director, Grimur Hakonarson, and I really wanted to try to be as authentic and true to the environment of the film as possible. So we started thinking about what instruments would be around in a valley in Iceland, such as the one where the film takes place, and the list isn’t very long. Organ, accordion, maybe piano and possibly a violin and that’s really what we ended up using. I think that when it comes to instrumentation there are usually some sort of clues in the story and/or the geography of the film that lead you to the right choices, so it’s a matter of following those. If anything, not featuring the accordion might have been the risky move!

Speaking of new projects, The Edge of Seventeen will have its world premiere at the 2016 Toronto Film Festival. What was it like creating the music for that film and what will it feel like to hear it at the festival?

I came on quite late in the process so it was a bit of a mad dash to write that score, but what a fun mad dash it was!  Very early on I came up with a theme which everyone liked and I’d say about 85% of the score derived from that in one way or another. In a way, I went against the temp which wasn’t very thematic, but I felt very strongly that this was exactly what was needed - a tune that could unify and create coherence in the storytelling.  At the end of the day, I feel that the film is so good that the real job was to not mess it up!  Projects like these are a rare treat and I can’t wait to be there for the premiere in Toronto and experience people’s reaction to it.

Can you talk about your other new projects and when the public will get a chance to experience them? Which of them are you most excited about and why?

I have several new projects in the pipeline. This week I’ve started work on a remake of the 90’s cult classic Jacob’s Ladder, which I’m very excited about. It’s my third collaboration with director David Rosenthal, who is a joy to work with - he’s so passionate about the music. We’ve been recording some very experimental stuff with a small string ensemble this week and I’m really excited to discover where this will take us. Another film project in the pipeline is a new Icelandic animation film called Ploey. The story is really great and the artwork is just beautiful, so it’s a really promising one. It’s great to be a part of the emerging film industry in my native land and I’m just finishing up a documentary there called Ransacked. It’s about the financial collapse in Iceland and how these big hedge funds bet against the local banks before the crash, only to come in and buy them for pennies after they come crashing down. It’s really an eye opener about how the international financial system works! Then, early next year, there’s another show in the Chicago franchise coming on air on NBC; this one is about the legal system and is called Chicago Justice. So, lots of long days and nights ahead!

You write the music for the TV series Chicago Fire, Chicago PD and Chicago Med, which must be a completely different mindset than your work for film. Tell us about moving from TV to film and back again. Is it ever daunting or does the challenge inspire you?

In some ways it’s different, mostly in terms of time and schedule, but in other ways it’s basically the same as doing a film. You have to tell the story and serve the vision of the filmmakers, while hopefully writing music that can stand on its own. It’s always a challenge but I actually find jumping back and forth quite helpful and inspiring in that you’re always faced with new challenges and the monotony gets broken up.

You’re spending more time in your native Iceland these days than before; how does that intertwine with your work in Hollywood? Do you have to switch gears culturally or is the music and storytelling process completely universal?

Strangely, I find it to be very helpful when writing for Hollywood projects. Sometimes, it’s good to be removed from the reality you’re writing about and I definitely am more productive in Iceland; it’s so peaceful and quiet there. There’s just less background noise so you have more focus, and I definitely spend less time in traffic!

What’s the most important part of the relationship between a director and composer and how do you find common ground? Do you also have to build relationships with the actors to make the music more cohesive?

I would say that trust is the most important aspect of the director/composer relationship. Without it, it’s hard to find any common ground. That’s why I think most composers really cherish a good relationship with a director. That’s the environment that makes it possible for us to do our best work. I rarely interact with the actors, except maybe at the premiere!

Why did you choose BMI to represent your work and how has the relationship progressed for you since you joined?

I got my first opportunities in Hollywood through BMI, via the Pete Carpenter fellowship and Mike Post, so it just makes sense to be represented here! I feel very much at home with BMI and have a great relationship with a lot of people at the Film/TV branch and other parts of the organization.

Rams is based on a true story about two elderly brothers living on the same farm and leading a very rural countryside life – but who have not spoken to each other for many decades. How did the music play into the silence between them?

That’s a very good question and something that the director and I discussed a lot. He very much emphasized the fact that these two characters live most of their lives in silence and we had to respect that. Even when there is music, it had to be in harmony with their environment. What helped me a lot working on this film is that I happen to know quite well what the natural environment sounds like where the film was shot. It is where my family is from and I have been coming to that valley since I was a little child.  My mother was actually born in the farmhouse where one of the brother lives! Somehow knowing the sound of that place was an important part of guiding me to the sound of the score.