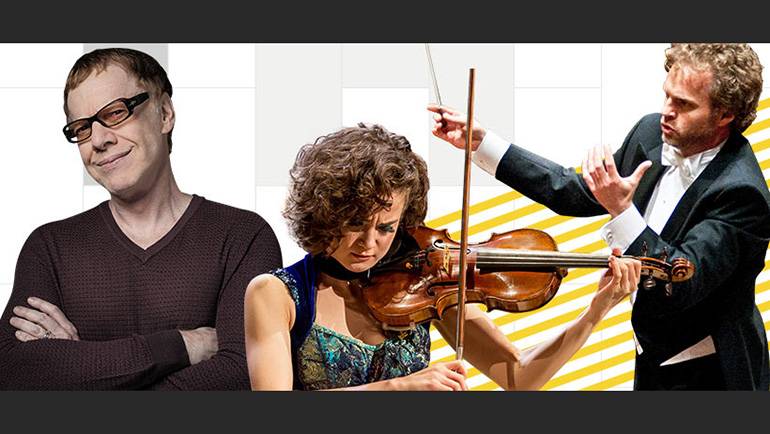 For anyone who’s ever gone to the movies and left humming the score, chances are good it was written by renowned BMI composer Danny Elfman. Elfman is famous for the driving sound of Beetlejuice, which became a hallmark for the comedy-fantasy film genre and for video games. He also provided the film score for nearly all films directed by Tim Burton, including the cult classic Nightmare Before Christmas, which sells out to audiences that dress up for the live-to-picture performances each year at the Hollywood Bowl in LA. At last year’s Halloween event, which marked the film’s 25th anniversary, Elfman strapped on his guitar for an eerie rendition of “Dead Man’s Party,” among other of the film’s notorious tunes to which he added his iconic voice. Beyond these fan favorites, Elfman also invented the cinematic sound for Spider Man and Men in Black, as well as the main theme for hit TV series Desperate Housewives.

So, what is BMI’s Richard Kirk Award-winning film composer Elfman doing composing a violin concerto? Simply put, flexing his multitalented musical muscles, and the result is just as compelling as his film music. Two years ago, the Prague orchestra requested that he compose a violin concerto for virtuoso Sandy Cameron, and Elfman composed the concerto as his first freestanding orchestral work. In his latest piece, Eleven Eleven, Elfman takes listeners by the hand and draws them deeper and deeper into a fairytale world, a signature journey for Elfman. In it, the virtuoso violin soars to dizzying heights, and it’s only later when bells and low brass come in that a sense of his Hollywood work can be felt. But in this case, it’s a master musician referencing his own background with subtle irony. Here, it’s infused with joy and playful energy – but with a sound just as complex and smart as you would expect from a composer whose name has become synonymous with “I need to hear that again” music.

In addition to Eleven Eleven, Elfman’s newly released CD also features his “Piano Quartet,” again revealing his profound knowledge of musical tradition, as well as his musical sense of humor. Together, we experience a fullness of texture that would have turned even Stravinsky’s head.

You can hear Eleven Eleven performed live by Sandy Cameron with the Royal Scottish National Orchestra conducted by John Mauceri on March 31 in Tucson, AZ; on April 4 at The Soraya in Northridge, CA (with a 10% discount for BMI members using code ELFMAN); and on May 17, 18 and 19 in Denver, CO. You can also find the album here or stream it here.

In the meantime, read on for a Q&A with Elfman about this fascinating turn in his storied musical career. You’ll learn things about him that even we didn’t know!

You’ve said, “I don’t merely want to write music that is free from the influence of films, instead, it’s a compelling need.” Why and when did you take this turn?

I have to have challenges or I wither and die. I love writing for film but I rarely am allowed to leave my “comfort zone,” so this new world of writing allows me to open up and let loose. And it’s also a huge challenge… starting something that I have virtually no idea if I possess the ability to even finish.

Your new album features both a violin concerto (Eleven Eleven) and a piano quartet. Why these two instruments?

Well, the intention was to record and release the Concerto. However, in the year it took to make the arrangements, record and mix, I received another commission for the Philharmonic Piano Quartet Berlin. I was able to record in time to add to the Concerto release. I just thought it would make a great companion. And, as it was a short piece it couldn’t get released on its own, so I presented the idea to Sony and they agreed. So, here it is.

What is the significance of the name Eleven Eleven?   Very simple. After finally finishing the months and months of work I was finally finishing the last cadenza with Sandy. She thought it would be amusing to count the bars and as she guessed, it was over a thousand, although neither of us had any idea at that point. She thought it would be amusing if there were eleven hundred and something, as I have a bit of an obsession with the number 11 (Elf means eleven in German). We counted, and to our utter amazement it was exactly 1111 bars long! Seemed too strange to be true. Hence the name.

How does your career and creativity as a film composer affect the freestanding music you write? Is there overlap?

Yes, of course. I’m absolutely committed to taking at least one concert commission a year for as long as I can still manage. So, that means giving up film work each year. It’s really hard. And competitive. For the concerto, I had to start and stop a number of times to do film work, then resume. So, it’s very challenging and to say the least it guarantees that I have no free time, ever. But that’s the sacrifice I am willing to make.

What’s the process you go through to get a freestanding musical idea you can run with and create around?

Wow. That’s a really hard question. I’m not sure I can answer it. It’s just a lot of experimenting and getting ideas and running with them and seeing if they survive. For the concerto, I’m guessing I wrote 3-4 times more music than what exists in the final version that we recorded… honestly, it could even be 10 or 20 times more? I have no idea. It’s all just running with a thought, and either it connects and survives, or later seems to not work and gets cut or re-written.

Oh man… lots. I have already accepted a commission for Third Coast Percussion, to be performed along with Philip Glass’ new work, at The Phillip Glass Days and Nights Festival this fall. I have accepted a symphonic commission for the National Youth Orchestra of Great Britain for next summer’s Proms festival in London 2020. Should be wild! One hundred and sixty-five extremely talented young musicians, all on stage together. I’ve also accepted a concerto for percussion and orchestra written for Colin Currie who’s an amazing British percussionist, to be played with the London Philharmonic Orchestra in London, spring of 2021. I’m also hoping to finalize plans for a cello concerto that I’m super excited about, but it’s not finalized yet. I’m also working on a “semi-secret” personal project that involves a chamber orchestra and my own voice. I don’t know… is that enough?