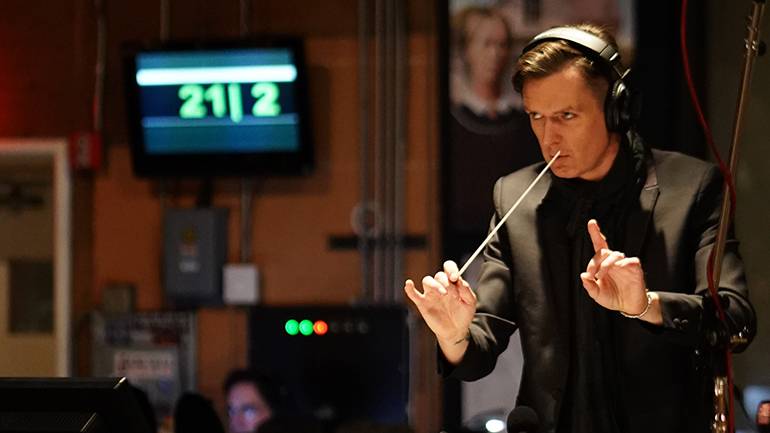 Fil Eisler credits his early years as a rock guitarist with giving him a background in producing records, which he says has been essential in his career as a film composer. But it wasn’t just anybody’s records the multi-talented Eisler cut his teeth on. As a co-writer on Robbie Williams’ “Stalkers Day Off (Hanging Around),” “Talk to Me” and “Superblind” (from Williams’ multi-platinum album Reality Killed The Video Star), Eisler has also worked with rockers Ryan Adams and Dave Stewart, among many others. Then for a change of scenery, Eisler tried his hand at composing for film and was invited to the prestigious Sundance Film Composers Lab, where he went onto score, among others, Proud Mary, The Titan, and How To Be Single, while also directing and leading over a dozen heavy-hitting Hollywood composers for Peabody-winning documentary, Newtown.

By all the accolades his work in film has produced, including the World Soundtrack Awards New Discovery Award, SXSW Best Soundtrack Award and multiple BMI awards for both his film and TV work, one would think he’d stay put in visual media. Not so. The very versatile Eisler has now entered the concert stage with his freestanding work For J.E. Concerto for Violin and Orchestra, which will have its world premiere at the American Youth Symphony in Los Angeles’ Royce Hall on April 27. At this Gala event, Eisler’s music, featuring world-class violinist Sarah Chang, will be alongside composer icons Dmitri Shostakovich and Richard Strauss.

So, of course, BMI needed to know more about the why and how of this transition. Here’s what Fil Eisler, in his own words, had to say.

You are a renowned film/tv composer with credits that include Empire, Revenge, Proud Mary and How To Be Single. What made you want to try your hand at a concerto for violin and orchestra?

To be honest, the opportunity came to me as opposed to being something I was actively looking for. But writing concert music was something I had wanted to do for a while. I had just never found the time between film projects. I got a phone call from David and Krystana Newman saying the AYS was starting a new commission program and would I be interested writing something? So of course, I said yes, I mean what an incredible opportunity. It was also incredibly daunting - I had never written a concerto before, let alone for an instrument I didn’t play myself and at the time, John Williams was going to write a work for the same program, so naturally I was absolutely s****ing myself. But fear has always been a great motivator for me and I actually loved the amount of learning and studying I had to do in order to feel comfortable writing this kind of piece. Hopefully it made me a better composer and a better musician! It was wonderful.

The American Youth Symphony performance on April 27 is your world premiere. What does this gala mean to you and why did you choose this ensemble?

I have been a great admirer of theirs for a long, long, time so I was absolutely blown away to be approached by them. David Newman has been both a friend and a teacher to me and I followed his work very closely while he was directing and conducting over there. I think what they represent to the musical community in LA and beyond is unparalleled and the level of musicianship is just astonishing. This gala really is a celebration of their work in that community and it absolutely should be celebrated.

What made you feature a violin? Are there other instruments you would like to feature in your next project?

I believe the reason I was approached in the first place was because Sarah Chang had heard some of my film work and asked if I would write something for her. Obviously the chance to write for such a world class musician is something you don’t just pass up. Also it made a lot of sense at that time in my life. The concerto is dedicated to and loosely based around the life of my grandmother Jean Eisler (the title of the piece is “for JE”). She was a violinist before and during the Second World War and a huge influence on my life both musically and personally. She passed away at the age of 101 around two years ago so this just seemed timely.

As for what instrument next, I almost want to immediately write another piece for violin! Since this was my first outing for the instrument, I feel like I learned so much that I sort of immediately want to go back to the drawing board! That said, I’d love to write a cello concerto and a symphony. But we’ll see what sparks next. I’m not discounting anything. When you’re inspired you should just write.

Tell us a bit about your musical background and how you got into composing. Did you find it or did it find you?

My earliest musical memories are actually of my grandmother, teaching me piano in Prague where I was born. I spent most of my 20s and 30s as a guitar player in bands and playing sessions, writing songs and producing records. When I moved to LA, my lifelong love for movies really solidified into writing for that medium. It just came along at the right time in my life and then it became something I wanted to pursue more than anything else up to that point. It made me fall in love with music all over again.

My relationship with BMI has been huge in my career, not only through the formation of friendships, but also through their involvement in the Sundance Composers Lab. That event alone had a massive impact on my career and on my state of mind as to just crystallizing in my brain that this was what I now wanted to do with the rest of my life. I hope to return the favor soon by coming back as an advisor.