Posted in MusicWorld on December 31, 2009 by Kevin Zimmerman 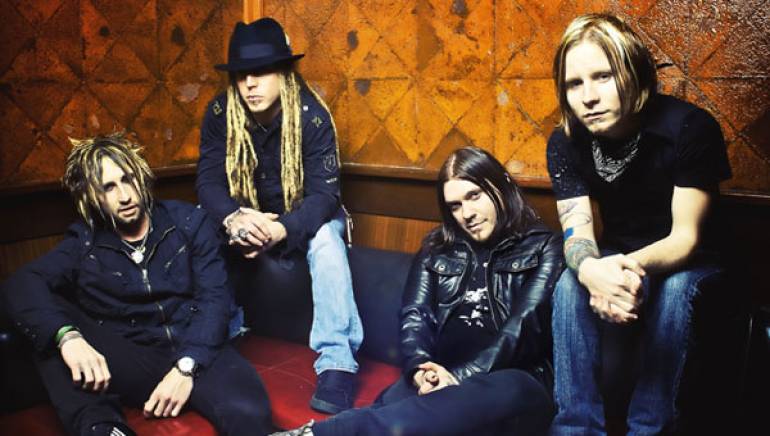 Just when it seemed that the career of Florida rockers Shinedown couldn’t get any more massive, along came The Sound of Madness.

The group’s third studio album for Atlantic, which came out last year to immediate acclaim by critics and fans alike, has been certified gold, while its second single, power ballad “Second Chance,” went platinum. And lead singer/songwriter Brent Smith says they’re not done yet.

“For us, it’s never been about releasing a record and then going away in a year,” he says from a hotel room on the east coast, where Shinedown recently played its 300th show on its current tour. “We’re in a unique position, especially in this day and age, of being able to release as many singles as we [can]; all together, we’ll probably have six.”

Lest one get the idea that someone at Atlantic isn’t paying attention, chew on this: Shinedown’s first 10 singles all cracked the Top 5 on Billboard’s Hot Mainstream Rock Tracks Chart, making them the first band to do so. Then there’s the fact that Madness, 2003’s debut Leave a Whisper and 2005’s Us and Them have sold over 7 million copies combined worldwide.

“We’re by no means embarrassed by the first two albums,” Smith says, “but the second one, especially, felt really rushed. It was very important that there be no time limit on this album, so when Atlantic asked us, ‘How long?’ and we said, ‘We don’t know,’ their response was ‘Okay, whenever you’re ready just let us know.’ They allowed us to be artists and to make this sound as big as it possibly could.”

Adding immeasurably to achieving that goal was producer Rob Cavallo. “I didn’t really know who he was at first,” Smith admits, “but then my manager explained who he’d worked with: Green Day, Kid Rock, My Chemical Romance, and so on. When we started he asked me what kind of statement we wanted to make with this record, and I told him we wanted for people to say that this was a record they felt needed to be made. He said, ‘Let’s do it,’ and I could tell he was serious. We worked shoulder to shoulder for 18-20 hours a day, but took the weekends to reflect on what we’d done — something I’d never done before and which really helped a lot.”

There’s also a deliberate bluntness to most of Madness’s tunes. First single “Devour” makes no bones about its derision for then-President George W. Bush, while “Second Chance” reflects on Smith’s leaving home to pursue his rock dreams and the surprisingly gentle “If You Only Knew,” Smith’s first straight-up love song, is a tribute to his girlfriend and the birth of their son in 2007.

“Well, it’s a lot cheaper than therapy,” he laughs. “There’s been a lot of things going on for the past 10 years that I just never really confronted, or used metaphors to do so. This time out I wanted to make sure that everyone knows what I’m talking about and where I’m coming from.”

Fans come first for Shinedown, which explains not just the relentless touring but also the recent re-releases of the group’s first two albums as digital-only “deluxe editions,” with demo, acoustic, and live versions of songs included; Smith indicates that a similar deluxe Madness may be in the offing. “It’s a window for people to see inside our heads a little more,” he says.

For now, though, the focus is back on the road. “We’re going to the U.K. and Europe for the fourth time, playing Australia, New Zealand and Japan, then South Africa and South America,” he says, sounding nothing less than pumped. “We’ve always been very open with our public — and this is what the fans want.”