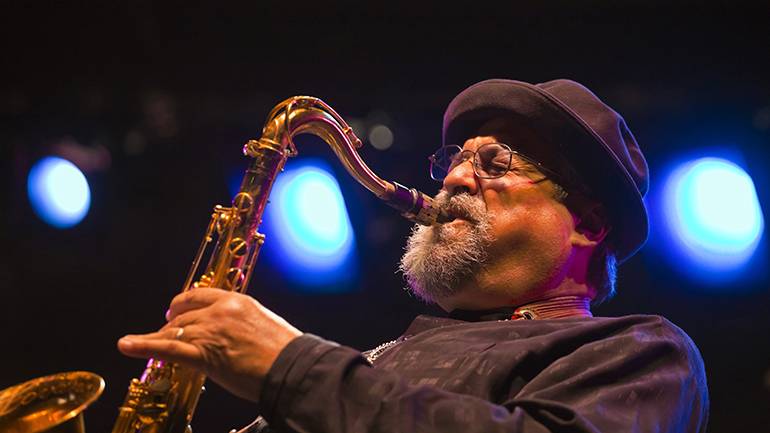 Joe Lovano has spent his entire life as a student of jazz, and the majority as a teacher. The revered saxophonist and multi-instrumentalist, a second-generation Sicilian American and son of tenor saxophonist Tony “Big T” Lovano, developed a love for jazz at a young age. Growing up in Cleveland, his family was immersed in the jazz scene, and his parents were supportive as he found his own footing in the music business.

Joining the Musician’s Union as a teenager, the young Lovano played professionally as soon as he could, saving money for college and hitting the road as a performing musician with the Woody Herman orchestra. Over the course of his career, he’s released dozens of albums as a leader or co-leader and earned a GRAMMY, as well as multiple Down Beat magazine accolades.

Lovano has also devoted considerable time and creative energy toward music education, serving as the first Gary Burton Chair in Jazz Performance at Berklee College of Music, where he has taught for more than 20 years. Circling back to his Sicilian roots, Lovano recently discovered that a distant Italian cousin commissioned a sculpture of him in the mountains of Sicily. Lovano has yet to see the sculpture in person, but hopes to travel to Italy this year.

BMI chatted with Lovano just as he wrapped up a week at the legendary Village Vanguard—a long-awaited return after the pandemic. Lovano shared his thoughts on how musicians build trust, what advice he’d give to young artists, and what inspires him after a long, illustrious career.

You signed up for the Musician’s Union the same year you got your driver’s license, and immediately started playing professionally, saving up to attend Berklee College of Music. Did you always know you wanted to pursue music as a career?

Well, my dad was one of the leading saxophonists around Cleveland in his day, and I just grew up with the music. By the time I was a teenager, when I did join the union, I was starting to play gigs. My dad was a leader—he always was playing five, six nights a week with his own groups—he was getting calls, and I ended up playing the gigs that he’d send me. As a teenager, I was developing a way of playing for myself and a repertoire where I could play with folks and not have to read music and just call tunes. So, that was the beginning. I ended up paying for my way to Berklee from playing gigs. When I went to Berklee after high school in 1971, I had a pretty rich history playing some famous, beautiful music.

When my mom and dad got together, it was through a community of folks going to jam sessions and gigs. They would listen to me practice down in the basement—and always be like, “Oh, no, that doesn’t go like that,” [laughs]. They were really supportive and hip to the music. My grandparents, all four, came from Sicily, and there was a lot of music in our house growing up. It was inspiring and it was a joyous thing.

In an interview, you talked about how you trust the people you play with, which is essential in jazz, whether you’re leading the group or you’re a sideman. How do you build that kind of trust with other musicians, and how do you know when you’ve achieved it?

Well, you know, it’s about developing a way of playing on your instrument with confidence, and having the embrace of the elders—that was every everything for me. Learning the music that my dad was playing with his groups and hearing them rehearse sent me to the woodshed, so I could eventually sit in and play with them. And having that embrace gives you confidence, and then you start to have that trust with each other. Once they start to trust you, then you’re on your way.

And it was about developing a sound and a pleasing way of playing that embraced the world of music. I really learned that from my dad’s record collection and from his experiences—he heard Charlie Parker, he heard Lester Young. And with his groups he played on the same stages as Stan Getz and Flip Phillips and others in the late ’40s, early ’50s, when they would come through Cleveland. I grew up within the history of jazz, which is records. When you’re listening to Thelonious Monk and Charlie Parker and Coltrane and Sonny Rollins, you’re hearing that depth of how they trust and play together.

You’ve had an incredibly prolific career so far, releasing more than 40 albums as leader or co-leader, and you’ve been playing music for over 60 years. What is your inspiration to keep creating and how do you approach each new project?

It’s all about the people that you play and develop with, and relationships with folks within the multicultural essence of jazz, and the multi generations in the music. What keeps me inspired is playing with the older masters in the music, which I’ve done. I’ve been in bands as a sideman with some great people, like Woody Herman, Bob Brookmeyer, Paul Motian, Charlie Haden, Carla Bley, Elvin Jones and Hank Jones. So, when you’re within the community, that keeps you inspired, as well all the young cats on the scene that you encounter along the way.

I’ve been in jazz education since my days with Woody Herman in the late ’70s. That was the first time I had to address a forum of students—while we would be touring, we would play a lot of colleges and high school concerts, which included some afternoon workshop settings. That was the beginning. I was on the faculty at William Paterson University throughout the ’80s and the early ’90s, as well as The New School in New York, and NYU, and doing workshops at Manhattan School of Music and Juilliard. In 2001 I was awarded the Gary Burton Chair in Jazz Performance at Berklee, where I attended in ’71, and I’m still in that position today. I go to Boston four times a semester and address students within the Global Jazz Institute. It’s been really great sharing the blessings.

As you just mentioned, there are many ways in which you serve as a mentor to young musicians. What’s the one piece of advice you give to artists who are just starting their careers?

To embrace the world of music and to get into your instrument, but also to study all the instrumentalists and the roles of the different instruments around the band. If you’re a bass player, for example, you have to know everything the drummer is doing. It’s kind of all one, and that’s why I speak on that a lot as a saxophone player.

When I was pretty young, my dad told me, “You have to know what’s happening. You’re not just playing the saxophone.” That opened the door for me to realize a lot of things. And when I listened to Max Roach play with Sonny Rollins or Charlie Parker or Clifford Brown, I started to hear the interplay and what they were doing. They were talking to each other—creating music within the music. So, I speak on those things a lot.

You’ve had many career highs—winning a GRAMMY, working with luminaries like Abbey Lincoln, Chet Baker, Gunther Schuller and Herbie Hancock, having the opportunity to collaborate with your wife, Judi Silvano—are there any other bucket-list items you’d love to cross off?

I mean, just the continuation of living in the creative world of music is the main thing. The collaboration with Judi has been amazing—to improvise together and create personal music together—and not just try to recreate what others have done, to really try to compose and put ideas together that that shape new music all the time. That’s the inspiration, really.

Working with Judi is amazing because she has an incredible vocal instrument and imagination. She’s coming from the dance world as well as the music world, and she’s an artist and paints. During the pandemic, we did a number of live streams from our studio where we live, and she painted a painting while we improvised through some music. It became a beautiful, expressive outpouring of music and art. She’s got multifaceted inspirations going on and I’m learning from her all the time.

So that’s really great that we could collaborate, especially during this whole time when weren’t playing with others at all, until just recently. I just did a week at the Village Vanguard with Tyshawn Sorey and Bill Frisell. And we had an amazing week—the last full week that I played at the Vanguard was January of 2020. It felt so great to be back.

It’s been a real time of reflection and development and recording some projects. I have two recordings in the can right now for ECM Records, and I’m planning to record another in May with my trio Tapestry featuring Marilyn Crispell on piano and Carmen Castaldi on drums. And the other was one with Bill Frisell and Tyshawn Sorey on a collaboration with this great guitar player from Denmark, Jakob Bro. They’re both in post-production right now. It’s been a lot about composition and trying to document things that are going to be long-lasting.

How did you first start working with BMI, and how has it impacted your career over the years?

When I started to record as a leader and document some of my original compositions—which was really in the mid ’80s—that was the beginning of my relationship with BMI. And having that, for me, elevated my whole stature and awareness on the scene, being a part of BMI. I was recording and playing with Paul Motian at the time, and we were documenting a lot of Paul’s compositions. He’s the one who hooked me up with folks at BMI, and I started to have my own publishing company. That was the beginning, and it’s carrying on today. It’s really a great relationship.