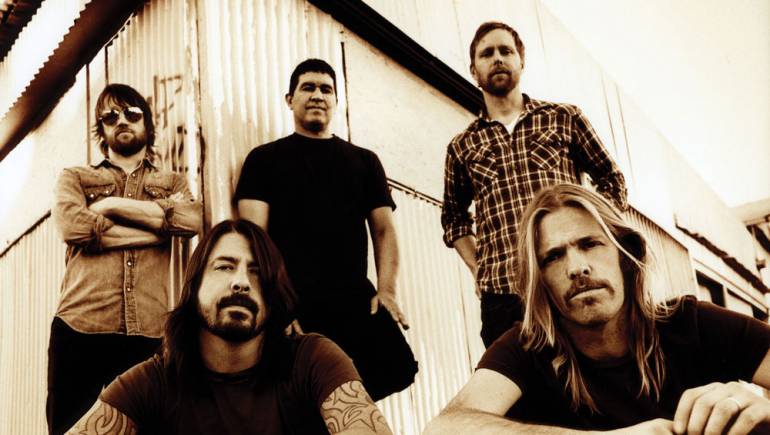 First came news that Foo Fighters were recording a new album — not just to analog tape, but in bandleader Dave Grohl’s garage. Later arrived the music video for its lead single, “Rope,” filmed on VHS. When it was released on April 12, Wasting Light showcased the band’s most urgent and consistently walloping batch of songs since its first pair of records. From the wooly aesthetic to its brutish charisma, Wasting Light marks the band’s return to form, which is to say: the ’90s.

The decade that bore grunge and alt-rock, it was also a time in which records actually sold. And even in this regard, Wasting Light has proven a vestige of that bygone era: Selling more than 230,000 copies its first week, the album debuted atop the Billboard 200 and unceremoniously bumped a reigning Adele from her top position. Their seventh, Wasting Light, was also the first Foo Fighters album to ever reach #1 stateside, which is where the band has been celebrating its recent success.

In a nod to their recording space, Grohl and his group spent the better part of April playing exclusive, free concerts in the garages of lucky fans from select cities across the country. Bringing simplicity and intimacy back into the fold is something of a throwback for Foo Fighters, who became acclimated to concerts in massive arenas during the past decade. But their proficiency on that immense, international stage can be attributed to the Foo Fighters’ approaching and then executing a stadium or arena show as garage-rock writ large.

With Wasting Light, the five-piece has honed that rugged sound and do-it-yourself ethic, rewriting its own stripe of raw rock. Retaining Grohl’s enduring knack for melody, the album accords space for his seething outbursts, suited to the pummeling air of crashing power chords and cymbals that prevail. These peaks cap the consistent chug of tracks like “Arlandria” or “Matter of Time” in a fit of punk-rage from Grohl. They’re sustained in songs like “White Limo,” where the frontman screeches for the song’s entirety; there, compounding the already difficult to discern lyrics — beyond Grohl’s shrieks and the din of churning guitars — is the unmistakable hiss of tape, the medium of recording that lends Wasting Light its character.

In other tracks, the analog production is atmospheric, particularly during the brooding “I Should Have Known,” which unfolds and swells through the haze in cinematic fashion. Or with the opening blast “Burning Bridges,” an unrelenting surge that pits a downward-spiral riff against Grohl’s vocals, which echo with harmony as the chorus laments crumbling relationships. “Your bridges are burning down, they’re all coming down,” Grohl cries, a triad of guitars united to the bustling tandem of bass and drums. The leadoff track, “Burning Bridges” sparks Wasting Light with stormy guitar rock that announces the album’s emphasis on the song rather than hi-fi precision or manipulation.

As both a document of and case for capturing the root of a song’s spirit, Wasting Light was — appropriately — recorded in a relatively short span of time. Pat Smear officially reprised his role as guitarist when work began last August, bolstering the band’s guitar attack from two to three. To keep the songs focused, Grohl tapped iconic producer Butch Vig, whose reputation for trimming tracks to their leanest, most muscular form was founded upon helming the monumental breakthroughs by Nirvana and Smashing Pumpkins — and continued by more recent credits on Green Day’s 2009 opus 21st Century Breakdown. Grohl documented and relayed the process of recording to fans last fall via Twitter with pictures of the band in the studio and charts displaying completed or missing instrumental parts for songs. After four and a half months, Wasting Light was complete.

The band’s intended confluence of sound and direction may best be represented by “Rope,” which was released shortly thereafter and debuted at #1 on the Billboard Rock Singles Chart. An archetypal strain of Foo Fighters material, “Rope” gradually shifts the guitar dialogue of its opening hook into a shouting match, and features scintillating propulsion and fills by drummer Taylor Hawkins. The crux of Wasting Light, though, is “These Days,” which crystallizes the galvanizing brand of sing-along chorus Dave Grohl has by this point patented. Opening with an acknowledgment of the inevitable end — “One of these days, your heart/Will stop, and play its final beat” — he moves to growl accusingly, “Easy for you to say/I bet your heart will be broken/I bet your pride will be stolen.” Even so, Grohl sings without condemnation, and resolves in a repeated refrain, affirming that, “it’s alright.”

The most anthemic of Wasting Light’s barbed romps, “These Days” sieves hard reality and morbid certainty into a celebration of the present. Which is just another trick Grohl has patented since forming Foo Fighters and moving from behind the drum kit to shoulder the spotlight as a frontman in 1994. Championing rock that’s vivid in its tunefulness, he’s also unafraid to indulge his goofball enthusiasm, underlined by the memorable music video for the 1999 hit “Learn to Fly.” Grohl touches on relishing the moment throughout Wasting Light, on “Miss the Misery” — “Don’t change your mind/You’re wasting light” — and more ambivalently in the closing track “Walk,” bellowing, “I’m learning to walk again… Where do I begin?”

Their rough-and-tumble Wasting Light is shaping to be the biggest rock record of the year, and Foo Fighters are currently slated as a headliner during the Lollapalooza festival this summer. But the gap between the band and those devouring its music appears to have grown no wider as a result. Instead, the connection appears stronger than ever thanks to the group’s translation of its latest recording experience into similarly immediate methods such as Twitter and grassroots gigs. Foo Fighters might not be the only band capable of touring garages one month and stadiums the next. But they’re willing to — and it’s that ego-checked resolve that’s always kept fans front and center, however big the venue.