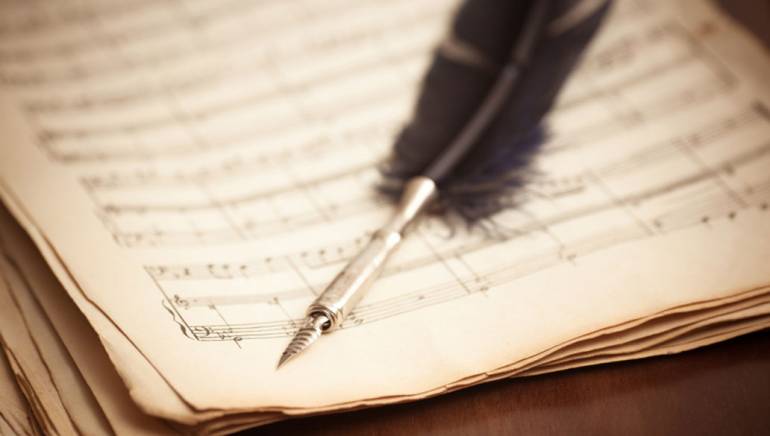 Sometimes songs come easy. You sit down and the whole thing pours out of you almost as if you’re simply transcribing it as it’s handed down to you from the heavens. Those are great but I’ve learned you can’t always count on it working that way. The other side of the coin is when songwriting more closely resembles the extraction of a particularly reluctant wisdom tooth — without an anesthetic. This article is about how to deal with those songs. I’m going to offer five different approaches to get you un-stuck and get your song finished one way or the other.

1. Make a Rough Recording of Your Song
Sometimes all you need is a little perspective. Often when we’re writing a song, we’ll go around and around singing it to ourselves, sometimes playing an instrument as we do it. This is a necessary and essential part of the writing process and although it’s helpful while we’re writing, it doesn’t provide us with the listener’s perspective. Whether it’s a song you’ve just been working on or one you’ve played live hundreds of times, if you’re not sure it’s finished, then do a rough recording. By a rough recording, I mean simply sing (and play, if you’re also an instrumentalist) the song into your computer, hand-held recorder or even your cell phone and listen to the playback of the recording without playing your instrument or singing along. This simple act of putting yourself in the audience, so to speak, will give you perspective on what is and isn’t working in a way that is impossible while you’re actually singing the song yourself. I’d also suggest printing out a lyric sheet and keeping it in front of you to make notes on as you get ideas from listening to the rough. Finally, I’d recommend making a rough recording, tweaking the song and then making a new rough recording, until you end up with a version of the song that you feel good about. This final rough recording can then do double duty as the version of the song you’ll provide to the session musicians and singers so that they can learn your song for the demo session.

2. Play It For Your Songwriting Group
Still stuck? Sometimes it takes another set of experienced ears to hear the things you’ve been missing. Songwriting groups can be great for this. If you don’t have a songwriting group, don’t worry. Most cities have songwriting organizations, open mics and even local coffee houses with live music where you can meet other songwriters. Once you’ve found a few other songwriters whose work you respect, you might suggest getting together once every week or two and showing each other what you’ve been working on. This is a great way to get suggestions on how to refine your material. I’d recommend making a pact to stay constructive. There’s never a point in being unduly negative. You’re all trusting each other with songs that are still in their vulnerable early and unfinished stages. Mean-spirited comments or unnecessarily harsh criticism can cause a potentially superb song to be abandoned on the spot. It’s important to remember that songwriting is still a subjective process and not every suggestion you get will feel right to you. That’s fine. If you get a single suggestion that makes your song better, then the process is working. By the way, if you’re looking for a songwriting organization in your area, the Nashville Songwriters Association International (NSAI) has chapters all over the country and even overseas. Click here to find a chapter near you.

3. Submit Your Rough Recording to a Critiquing Service
Songwriting organizations like the Nashville Songwriters Association, The Songwriters Guild of America and Taxi.com offer song critiques to their members. This can be a safe, entry-level way to try out new material on experienced industry ears without risking poisoning the well if the song comes back with a less-than-glowing set of comments. These same organizations also offer “Play for Publisher” or “Play for A&R” song screenings. I’d highly recommend waiting to submit to these events until you have a song (and, just as importantly, a recording) you feel confident is completely polished. You only have one chance to make a first impression with a publisher or record executive, so I’d suggest taking your time, making sure your song is finished and that you have a totally professional demo before you head down that road. While a pro critique can yield some terrific insights, it’s important to remember that songwriting is a subjective process. In other words, take all comments (good and bad) with a grain of salt.

4. Bring in a Co-Writer
If you feel you’ve got an exceptional idea but truly can’t seem to figure out how to finish it, then maybe it’s time to bring in a co-writer. Many co-writes begin from scratch, which is a great way to share the effort of creating a new song; however, sometimes co-writes happen when one writer brings a partially finished idea to another. For example, if it’s the melody that’s got you stuck, then I’d recommend working with a co-writer who has a melodic gift. If it’s the lyric, look for a strong lyricist. The key to co-writing is to find someone who’s strong where you aren’t (and vice versa) so, together, you can come up with something better than either one of you could have created on your own.

5. Put It Away (maybe forever)
If you’ve tried everything and your song still just kind of lies there, then it’s time to put it away — maybe even forever. The key to staying productive as a songwriter is not getting too bogged down on any one song. Sometimes songs are meant to be started simply to get you to the next song. Don’t be afraid to leave a song behind and start on something new. Sometimes you’ll come back to it months or even years later and sometimes you won’t. The more songs you write, the easier this will become. Promise. While songwriting can certainly be a challenge at times, it shouldn’t have to hurt. It’s up to you to decide whether a song needs one more good effort or an express trip to the circular file.

I’ll leave you with a final random thought: Often, the days you’re dreading working on a song are the days when you make the biggest gains. Always give yourself the benefit of the doubt and sit down and try. If it isn’t happening fairly quickly, then let it go, but if it is, you’ll be doubly glad you made the effort.

Cliff Goldmacher is a songwriter/engineer/producer/author and owner of recording studios in Nashville, TN and Sonoma, CA. Cliff’s eBook, “The Songwriter’s Guide To Recording Professional Demos,” is available as a free download from his site at http://www.cliffgoldmacher.com/ebook.  Cliff is also the owner/founder of http://www.NashvilleStudioLive.com, a website that provides songwriters outside of Nashville with virtual access to Nashville’s best session musicians and singers for their songwriting demos.