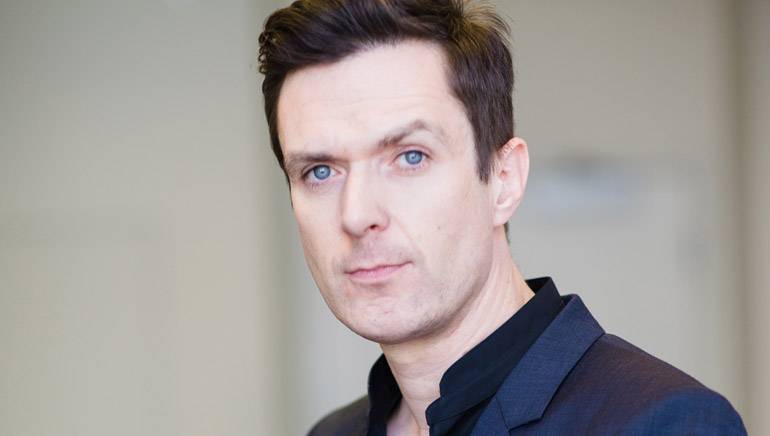 When he was younger, Fil Eisler dreamed of being a rock star as so many young musicians do. He came very close to that dream, working with esteemed artists including Ryan Adams and Kylie Minogue. But a funny thing happened on the way to the stadium — Eisler carved a niche as a composer, ultimately crafting moving scores for independent films and TV shows, including ABC’s Revenge and Fox’s Empire, that have become as integral to the viewing experience as the stories themselves.

Now, the Czech-born, English-raised composer, whose career was kickstarted in the 2008 Sundance Film Composer’s Lab, is being vaulted to the spotlight for his most ambitious project yet: his work on the documentary, Newtown, about the aftermath of the horrific 2012 Sandy Hook school shooting in Connecticut. Known for his unconventional approach to composing – this is a man who has mutilated decaying pianos from a scrap yard to achieve a perfect sound – Eisler took the unique step of bringing together 16 colleagues to contribute to the Newtown score to complement the harrowing story. BMI caught up with him before the film’s screening at South by Southwest, Sunday, March 13.

Can you talk about the process of scoring Newtown? How was it working with 16 other composers and is it something you would embark on again, or was it unique to this subject matter?
Well, as I’m sure you can imagine the whole process was incredibly humbling and heart-wrenching and inspiring by equal measures. The idea of working with 16 other composers was inspired by events depicted in the movie and the desire to do something. While the phrase “do something” is nebulous, we were after something specific. If there was any mission statement, I thought the film deserved the point of view other than just my own—this idea of community to shed light on another community. I had the idea it would spark something. It was bigger than any one of us. It was an inspiring process in so far as the fact everybody donated time and services. It was about leveling the playing field, where we could just be creative together, ultimately getting more eyes on the film. I think the film is sparking discourse.

Tell us about what motivated you to take on such an emotional project. How did it affect you in dealing with such a horrific topic; did it in anyway help resolve your emotions?
I reached out to Maria Cuomo Cole, who is the producer. I know she’s involved in a discussion about guns on the political level, which is something I wanted to take part in because I have a young kid. The country [my daughter] grows up in has the opportunity to go in a bunch of different directions. There are a lot scary statistics; they’re frightening compared to any other country that’s not in a state of war. That’s pretty much why I got involved. The thing about Sandy Hook – the mere mention of it drives people into a fetal position. It was that horrific and unthinkable, particularly to people who have kids. That people would rather shut it out—that’s dangerous because this is something we have to face. I think it’s something for people to get involved with on whatever level they can. Certainly watching the screenings at Sundance, some of the discussions I saw following the screenings filled me with a lot of hope.

It’s said that the music ranged from “meditative to solemn to hopeful.” Was there an element of trying to heal the audience in some way?
Yeah, absolutely. I hope that the film sends people forward rather than into themselves. It should be a gut punch, and it is. I will not lie and say it’s an easy film to watch. When people ask and I say what I’m up to, people are like ‘Oh, I don’t think I can watch that,’ or they say ‘I’m scared of that movie.’ I say you should be, and should watch it anyway.

How does it feel for you to be in the audience watching the film unfold again?
As you can imagine it was an incredibly, intensely emotional experience for the director and the editors and camera crew that lived with the people in the movie for three years. I don’t know anyone that managed to sit through the rough cut in one sitting without breaking down. I made through about 20 minutes before having to excuse myself. As intense as watching the experience is, first off, you have to remember that what you’re watching is infinitesimal compared to what the [victims’] families live through on a daily basis. If you think it’s a tough thing to sit through, remind yourself you’re fortunate to not be living it. I was fortunate to meet some of the families. They’re genuinely good people, good human beings.

One of the most inspiring things I heard at Sundance – Mark Barden one of the subjects of the film – said in the Q & A, ‘I know we look broken, and we are, but we see hope.’

Whatever you do, do that to help. If you’re a musician, make music. If you’re political, do something political. But don’t ignore this. That’s the takeaway from this. There needs to be discussion and action, and that’s not going to come from Washington. It’s going to come from a grassroots level. The orchestra sessions were incredibly intense. They were the only orchestra sessions I’ve been in where people broke down. I broke down on the podium at several points. I had to stop conducting. At one point I had to tell the crew to take the pictures off the screen, because the combination was harrowing.

You’ve scored quite a few dramas with some pretty heavy topics. What is the secret to keeping people engaged with challenging material – is it pace, specific instruments?
Your best ally is your instinct in regards to what music is needed for a dramatic moment. You have to feel what’s going on, on the screen and what the film is trying to say. What isn’t there or is already there and can be helped with music. It’s about how you can take what’s on screen to the next level.

How do you come down from creating such intense music? What’s your go to activity for relaxing?
(Laughs) Write more music for another project. Honestly I’m not the best person to ask. I’m not the best at walking away from it. For me, it’s family. Especially on a topic like Newtown, all I wanted to do is go home and hug my wife and kid every day. In general my family is my support system. There are a lot of long hours. You can get burnt out. So, nothing special – I don’t jump out of airplanes or anything. I have jumped out of an airplane actually, but on a consistent basis that would be a little over the top.

What are the most important elements of your job other than the music?
Composing is 50 percent of it and the other 50 is counseling and mediation. Honestly, it can be like being a translator. You have to translate what someone’s asking, decipher what people mean. There really is the side of it where you’re part shrink. I’ve spent a lot of time with directors talking about the process of making a movie and sometimes that can be informative. Infinite amounts of patience helps.

Can you talk about your relationship with BMI? Why did you join and how has it changed or helped your career?
My relationship with BMI began with the Sundance Lab, which I was very fortunate to take part in. A lot of people at BMI have become close friends over the years. Doreen [Ringer-Ross] has become a friend and confidant. It’s that level of knowing everybody there, rather than being a faceless corporation that makes money. We’re talking a lot about the relationship between art and money these days because the landscape is changing so rapidly. BMI is a much more human environment. You know who you’re dealing with. I didn’t get into [music] to deal with faceless corporations. Most musicians become musicians because they like making music with other people. I like the people.

You’ve worked with some big names in music, including Ryan Adams and Kylie Minogue, and it’s been said that you once dreamed of being a rock star. Do you still have those aspirations? How is creating your own music different from composing?
I gotta say, not really. I always have the hankering to make records, to write symphonies and make music with other artists. That’s what the last 10 years have brought into sharper focus. I watched people become famous and I think it’s something I thought I wanted when I was a kid. But it was always about recognition for the music. I would have been heartbroken for being famous for being a reality star or winning the lottery. What I did realize is that the concept of people being rock stars — having people going through your garbage — sucks. It’s really not something I would wish on any human being. It’s grim. Being recognized for what you do is beautiful. I aspire to that.

What’s next for you?
I’ve got a fairly full plate for a while – it’s one movie after another. I just finished How to be Single. There’s an adaptation of CHiPs, an action comedy, which I’m having a lot of fun with. Then I’m working on a sci-fi movie, The Titan with Taylor Schilling. So, TV shows and various things. It’s really exciting.