Posted in MusicWorld on February 8, 2008 by Tim Ghianni 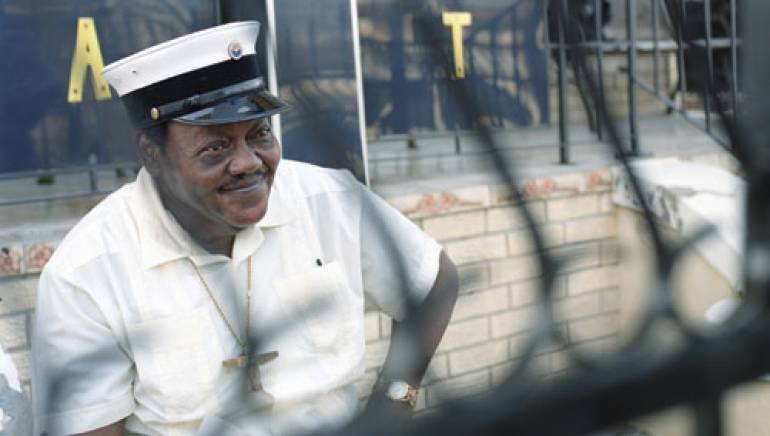 Fats Domino’s signature dancehall piano playing and drawling tales of love made him Elvis’s top rival during the dawn of rock & roll.

When pressed, Fats softly declares undying admiration for Presley. “I like Elvis myself,” Domino says over the phone from his New Orleans residence. “So does everybody.” With a humble air that warmly wraps around each of his concessions, Fats says he was simply “lucky” such songs as “I’m Walkin’” and “Blueberry Hill” allowed him to support his family.

The man’s authentic modesty is awe-inspiring, especially when Fats could argue he doesn’t get enough credit for creating the rock-&-roll sound. His induction into the 1986 inaugural Rock and Roll Hall of Fame class prompted more comparisons to the Memphis boy who would be king: The Hall notes that Fats Domino “sold more records (65 million) than any other Fifties-era rocker except Elvis Presley.”

In fact, any query about who “started” rock & roll could be answered by taking roll call of that class. In addition to Fats and Elvis, 1986 alumni include Buddy Holly, Chuck Berry, James Brown, Little Richard, Jerry Lee Lewis, Ray Charles, Sam Cooke and the Everly Brothers.

The man the musicians themselves look to as the architect of rock sounds is, perhaps, most telling. “Elvis called Fats the ‘King of Rock ‘n’ Roll.’ Bob Marley said reggae started with Fats Domino,” says r&b scholar Rick Coleman, author of the 2006 biography “Blue Monday: Fats Domino and the Lost Dawn of Rock ‘n’ Roll.”

Evidence of his importance can be found on Vanguard Records’ new double-CD set, Goin’ Home: a Tribute to Fats Domino, which benefits Tipitina’s Foundation, a non-profit foundation dedicated to musical rebirth in the Crescent City.

On the tribute album, Paul McCartney sings “I Want to Walk You Home” and his Beatles mate John Lennon sings “Ain’t That a Shame.” The Fab Four’s 1968 “Lady Madonna” is homage to Domino. That same year, Fats cut his own version, marking his last appearance in the Billboard Top 100 pop singles.

The emotional peak comes with Neil Young’s “Walking to New Orleans,” which he sang at a Katrina fund-raising concert. Fats’s version, released June 1, 1960, was his last Top 10 pop hit. A potent string of wonder and musical history preceded that nostalgic song.

Domino’s songbook also includes “All By Myself,” “Be My Guest,” “Bo Weevil,” “Don’t Blame It On Me,” “Every Night About This Time,” “Let the Four Winds Blow,” “Going to the River,” “My Girl Josephine,” “I’m in Love Again,” “Please Don’t Leave Me,” “Poor Me,” “So Long,” “Something’s Wrong,” “Three Nights a Week,” “Valley of Tears” and “Whole Lotta Loving.’’ In Fats’s fashion, the man is quick to share credit with co-writer and producer Dave Bartholomew.

While the music is universally present, Fats had settled in to a peaceful life with family and dear friends, flying contentedly below the world’s contemporary radar — until Katrina nearly killed him. The musician and his family chose to ride out the storm in their home in the Lower 9th Ward, the working-class neighborhood where he grew up. As helicopters plucked victims off roofs, there were media reports Fats was missing. That fear ended with the publication of a New Orleans Times-Picayune photo of Domino being helped off a boat after being rescued from his house.

Like almost everyone in the Lower 9th, he lost everything. But Fats says, “I ain’t missed nothing, to tell you the truth, and I was able to replace what I lost.” Today, he and his family live in a West Bank suburb, while their home is being rebuilt.

Thanks in large part to Tipitina’s Foundation, Fats Domino has become the quintessential face of New Orleans’ rebirth. The foundation is an offshoot of the New Orleans music venue. “Before the storm, our programs were designed to uplift the music culture of New Orleans,” says Bill Taylor, executive director. ”Since Katrina, it’s about saving that same culture.”

In May of 2007, Fats tore through an exhilarating 32-minute set at Tipitina’s. Proceeds benefited the foundation’s drive to provide musical instruments to New Orleans public schools, and to help musicians recover. Profits from the Goin’ Home tribute will also go to Tipitina’s Foundation. Twenty-five percent of monies earned at that red-letter show went toward the restoration of Fats’ Lower 9th home. In addition to helping Domino rebuild, funds will also fuel the construction of a Lower 9th community center and other programs aimed at lifting the neighborhood.

Haydee Ellis, the longtime family friend who helped orchestrate the concert and album, says her experiences recruiting talent for Goin’ Home demonstrate the appreciation artists have for Fats. “I talked to Randy Newman… . I said ‘we would enjoy your participation on this album’.” Newman, who performs “Blue Monday,” emphatically told her, “I’d love to. I’ve been stealing from Fats for years.”