Posted in MusicWorld on July 9, 2007 by Rob Patterson 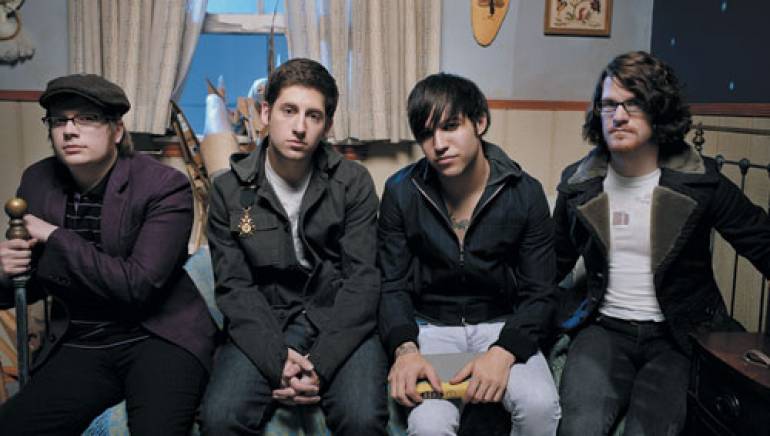 In just two short years on the scene, Fall Out Boy has certainly lived up to the atomic implications of their band name. Following the May 2005 release of the group’s major-label Island Records debut, From Under The Cork Tree, the foursome exploded onto the modern rock scene, racking up worldwide sales of some three million albums and winning a Grammy nomination for Best New Artist.

What has followed in the wake of their rapid rise may not literally be the radioactivity implied by the Fall Out Boy moniker. But when it comes to activity at radio, the band has pushed the needle on the Geiger counter of mass appeal into the red in their rapid return to action with this year’s Infinity on High.

“This Ain’t a Scene, It’s an Arms Race,” the new album’s first single, hit #2 on the Billboard Hot 100 chart its first week out — the highest rock single debut since superstars Aerosmith took the honor in 1998 — and quickly leapt to #2 on the Pop 100. The song was also the #1 Digital Track & Song for four straight weeks. The album followed suit by debuting atop the Billboard 200 chart and hitting the top slot on the Digital Album chart.

They got their moniker after asking fans at an early show for band name suggestions and someone hollered out “Fall Out Boy” — the name of a comic book character enjoyed by Bart Simpson on the popular TV cartoon show The Simpsons. And the band’s impact on popular culture may well prove itself to be as indelible and enduring as that of the long-running cartoon series, which is exactly what Fall Out Boy hopes to achieve. “I want to be the biggest band on the planet,” says bassist and lyricist Pete Wentz.

With their now-gold 2003 indie album on the Fueled By Ramen label, Take This to Your Grave, the band began to garner national attention and critical notice. Stints on the 2005 Vans Warped and Nintendo Fusion tours secured their relationship with modern rock devotees.

From Under The Cork Tree then yielded two Top 10 singles — “Sugar, We’re Going Down” and “Dance, Dance” — and spent 72 weeks on the Billboard 200 album chart. Fall Out Boy also became favorites on MTV, winning the coveted Viewers Choice Award at the 2006 Video Music Awards. Last year, the band headlined their first arena tour and then immediately hit the studio to record Infinity on High (which takes its name from a phrase found in a letter written by Vincent Van Gogh).

It’s not nuclear fission that has taken Fall Out Boy to the top, but rather a fusion of punk, emo, hard rock, pop and even hip-hop and soul. It’s a signature sound that Rolling Stone recently dubbed “the catchiest rock music on the planet these days.” Now certified members of the musical mainstream, Fall Out Boy even caught the ear of powerhouse r&b producer Babyface, who helmed the recording of two tracks on Infinity on High. The breadth of their influences is reflected on the track “Hum Hallelujah,” which incorporates the chorus of the Leonard Cohen song “Hallelujah.”

Fall Out Boy also powered their climb with a strong Internet presence and interactive relationship with the fans from the band’s earliest days. Since hitting the big time, Wentz has launched a record label, Decaydance, to provide other groups the same opportunities that the band has enjoyed. To wit, he signed the group Panic! at the Disco, who have joined Fall Out Boy at the top of the charts. The bassist has also launched his own fashion line, Clandestine Industries, produced and distributed by DKNY. “I want to create a culture people are interested in,” he says.

In a unique songwriting twist, Wentz writes the lyrics for Fall Out Boy but it’s Stump who sings them and provides the music, along with the rest of the band members. It’s certainly a formula that has translated into star-level success. But Fall Out Boy ultimately hopes to create something even greater than sales in the millions, chart-topping singles and sold-out arena shows. As Stump concludes, “I just want to be the best band we can be.”