Posted in MusicWorld on August 8, 2008 by Rob Patterson 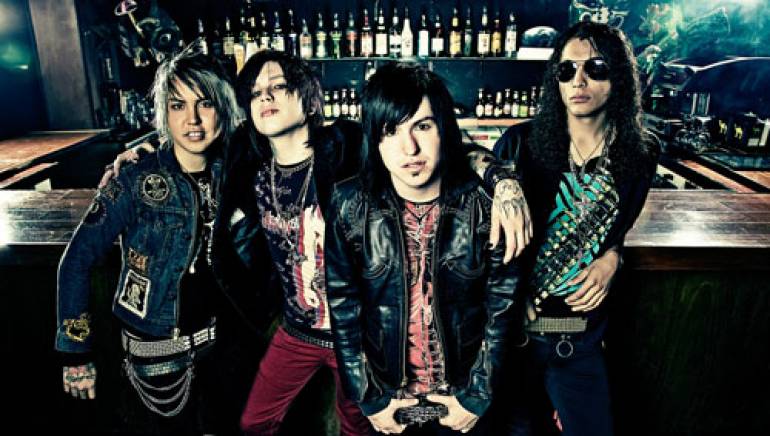 Escape the Fate is a Las Vegas-based band that, thanks to the group’s post-hardcore sound, reflects the underside of the city where America goes to party and gamble. But in their case, what happens in Vegas has hardly stayed in Vegas.

The band members found one another through My Space, and scored an early success after getting some play on local radio by winning a radio station contest judged by My Chemical Romance. The buzz on the group led longtime punk and hardcore label Epitaph Records to sign them to a deal.

In May 2006, Escape the Fate released a debut five-song EP titled There’s No Sympathy for the Dead, and then hit the road for a summer jaunt that included dates on the Warped tour. But just weeks before the group released its first album, Dying Is Your Latest Fashion, in September 2006, singer Ronnie Radke left Escape the Fate due to his reported substance abuse issues. A little over a month later he returned to the fold.

Their debut CD nonetheless reached #12 on the Billboard Heatseekers chart and #19 on the Top Independent Albums chart. But by 2008, Radke’s fate became inescapable due to legal and addiction problems, and he left Escape the Fate again. Singer Craig Mabbitt from the group Blessthefall signed on to front the act, who are slated to issue their second album, reportedly titled The Fall, in the last quarter of 2008.

“We’ve been through a lot this last year, and we took all that anger, frustration and sadness and molded it into an album with huge rock choruses, in-your-face riffs and melodies, and drums that will give your parents a heart attack,” reports bassist Matt Green. “This new album isn’t going to be a hardcore metal album and it’s not going to be a soft melodic album. We are who we are; we are Escape the Fate.”