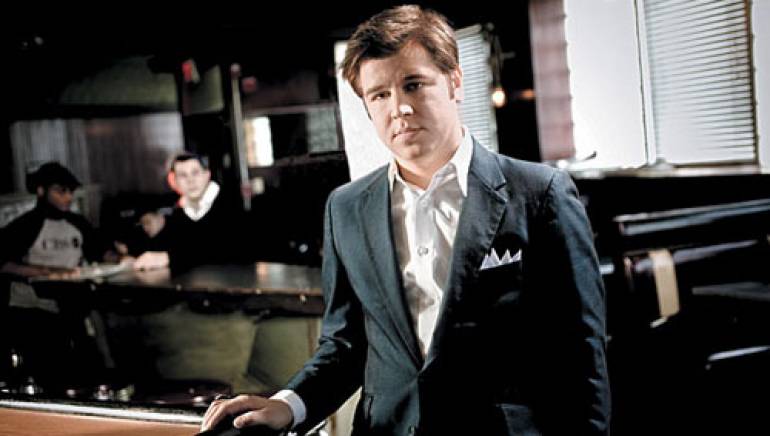 Indeed Roll With You is a vital, gospel-tinged mix of sweaty, up-tempo numbers and aching, lovelorn ballads — all originals — that connect instantly thanks to the passion of this young performer and his equally young band. The True Loves may employ classic soul stylings — such as anguished vocals and a raucous horn section — but they make the music their own by performing it with the youthful abandon that only a group of seven talented guys in their ’20s can muster. The fact that it’s soul music, and not, say, punk rock is merely incidental. “I think my songs take of a lot of different influences into account,” Reed says. “I just don’t see that there’s that much of a difference between us and any other rock band out there, except that our songs are better.”

Spoken with the swagger of a true soul man. For Reed, a 24-year-old native of Brookline, MA, playing soul music is simply a matter of having good taste. A walking encyclopedia of the genre’s history, Reed grew up listening to his music critic father’s collection of gospel, blues, country, soul, and R&B records and eventually taught himself to play guitar, piano, and harmonica. Then, at age 18, he got a first-hand education when he moved to Clarksdale, MS, one of the birthplaces of the blues, in the North Mississippi Delta, where he sang and played guitar with various soul, R&B, and blues bands at local clubs, and received informal lessons in performing from legendary blues drummer Sam Carr. “I learned a lot about singing because the audiences are very tough,” says Reed, whose has both a spine-tingling soul scream and a pleading falsetto in his vocal arsenal. “You really have to be on your game just to be able to last the night. If you’re going to perform for three or four hours, you’ve got to have stamina.” After spending nine months in Mississippi, Reed enrolled at the University of Chicago and got himself a gig singing and playing piano on the city’s South Side at a church run by former Chess Records’ soul singer-turned-minister Mitty Collier, using the $50 a week he earned to buy records for his college radio show.

In 2004, after a year of school, Reed returned to Boston and began to assemble the True Loves, which has undergone several line-up changes in the last three years, but now features Mike Montgomery (bass), Ryan Spraker (guitar), Paul Jones (tenor sax), Ben Jaffe (tenor sax), Patriq Moody (trumpet), and Andy Bauer (drums). Reed self-released an album of soul covers and originals, entitled Eli “Paperboy” Reed Sings Walkin’ and Talkin’ and the band played out all over the Northeast, earning glowing praise from the local press. The Boston Phoenix called Reed “a gifted young singer and guitarist,” while the Boston Globe raved about Reed’s “authentic and sincere music and vision,” calling him “a consummate musician.”

Through it all, Reed and the True Loves have proved that soul music is a social leveler that cuts across age, race, and musical taste barriers. “We’ve played shows in basements with punk bands and the punk kids love it,” Reed says. “We play rock clubs and kids my age are dancing. Then there will be the old guy who comes up and says, ‘I saw Otis Redding in the ’60s. Give me a hug.’ That has happened on more than one occasion.” No doubt the fans are responding to the energy of the band’s live show — a high-voltage experience the band captures to full effect on Roll with You, which was recorded at Boston’s Q Division studio with in-house producer Ed Valauskas. The album delivers from start to finish from the lead-off barnstormer “Stake Your Claim,” to the swaggering “The Satisfier,” to the dance-floor clarion call “(Doin’ the) Boom Boom” to the gospel shuffle of “Take My Love,” through to the longing ballads “(Am I Just) Fooling Myself” and “It’s Easier.” “I’m all about love songs,” Reed says. “The best songs in the world are boy/girl songs; everyone can relate to them.”

Of course it also helps that Reed is an electrifying showman who puts his heart into every song with a depth of feeling that would do his musical forefathers proud. “I just want to make people feel something,” he says. “You’ve got to get the audience emotionally involved and make people feel what you’re feeling. That’s the whole point of soul music. You have to make them feel like they got their money’s worth.” Consider it done. Roll With You will be released by Q Division Records in the Spring of 2008.