Posted in MusicWorld on November 28, 2018 by Malcolm Venable 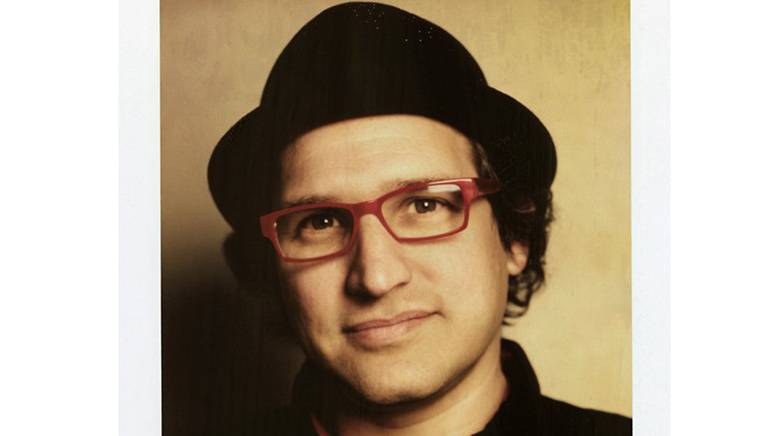 He’s an accomplished, successful composer for TV and film, but Eban Schletter is a man who sees the virtue in silliness. That could be because Schletter, who’s been making delightful music for SpongeBob SquarePants for nearly 20 years, was, in his own words, “a child too long.” But whatever forces blessed Schletter with a passion for play have also been generous in giving him many outlets for his creativity and skill.

The San Francisco native, who scored his first movie as a kid, always had a fondness for music and fun––famously donning a dress to become “Debbie” and play drums in the all-girl band Stone Fox back in 1989––which made him a perfect fit for Mr. Show with Bob and David, the groundbreaking HBO series starring Bob Odenkirk and David Cross where Schletter later cut his teeth composing. Since then, Schletter’s diverse styles and interests led him to score for Comedy Central’s Those Who Can’t, Another Period and Drunk History; IFC’s comedy-horror fest Stan Against Evil, Bobcat Goldthwait’s Misfits & Monsters, Amazon’s animated series Big Little Awesome, and more, while also maintaining a career as a solo artist. But it’s SpongeBob SquarePants, Nickelodeon’s internationally known symbol of giddy joy, where Schletter has remained the longest; since 2000, he’s been writing music for its episodes and specials, music that is as insanely joyful as it is deceptively complex. Schletter answered some questions for BMI about his process, and what it takes to turn silliness into art.

SpongeBob SquarePants is one of the most beloved animated shows of the last few decades. How has your own musical career and experience been shaped by being part of that iconic series?

I feel very lucky and grateful to be a part of that show. But, I have to say, at first they contributed to an unfortunately naive, dare I say, spoiled, view I had as I began my TV music career. You see, my first big job was Mr. Show for HBO. Bob Odenkirk and David Cross are both brilliant, and they were also great to work with. Then I got contacted by the people doing SpongeBob, asking me to do demos on spec as they were considering composers for this new show. So, I did a variety of cues. Then, I got a very nice letter thanking me but explaining that they were going in a different direction with scoring. As it turns out they made a creative decision to avoid the Carl Stalling style of score, and instead used library music, not just as a money saving solution, but as a creative choice to reflect the scattered nature of SpongeBob’s personality.

Anyway, for a while it seemed all downhill from there. Other shows did not have the quality and collaborative freedom that Mr. Show had, and I was shocked when I did more and more spec demos and just simply never heard from the people again. To this day, I’ve never gotten a nice rejection letter like that one from the SpongeBob folks. The norm seems to be no further communication at all (unless I get the job).

As SpongeBob started its second season, they wanted to do a sort of Disney parody duet with Mr. Krabs and SpongeBob. Tom Kenny, the voice of SpongeBob, had worked with me on Mr. Show and recommended me. So, suddenly I was actually working on the show I thought I’d never be working on! And ever since, I was on their roster. It’s always been on a song-by-song basis, as if I have a Bat-Phone, or rather a Sponge-Phone, at the ready. But it has been amazing, I mean, I got to work with Andy Samberg and P!nk!

You’ve scored so many fun and quirky shows cherished by so many, and your podcast Fantastical Musicorium appeals to imagination and play in a world that often requires adults to stuff those things down. How do you maintain your sense of lightness?

I have to admit, it isn’t easy. I feel like I have always been hyper aware of how dark the world can be. Maybe my parents shouldn’t have taken me to see The Deer Hunter when I was 11. Still, I try to keep in mind that if you are alive, you are designed to blossom.

As for adulthood, well, maybe this is because I was a child too long––like literally, physically, I was a very late bloomer––but I feel that as we grow to “put away childish things,” we put away a lot of the wrong things. The sense of play, silliness, even some of the throwing care to the wind, maybe shouldn’t be so easily parted with. Truly childish things like greed, jealousy, selfishness and entitlement seem to be acceptable in adulthood. I think those groups need to be swapped out.

Also––taking a walk. I can’t count how many times I’ve been able to get an idea, get a better mindset, reset myself, just by taking a walk.

You score both animation and live action. Which is more challenging and why?

Technically, animation requires more work––there is usually more music overall and it has to hit more specific moments, and more often. So, there’s a lot more time spent mapping out cues, timings etc. But you are also part of what’s bringing these inanimate things to life, so the music is kind of organically arising from the moments which, for me, makes it easier from a writing standpoint. Because, to me, the music has to justify its presence. With animation, that’s easy. It’s like, “Music? What are you doing here?” and you flash a backstage pass, “I’m with the band.”

But, with live action, they have captured living human moments––moments that have their own reality to them, so that, when you introduce music, it’s an intrusion. I have to be able to rationalize it, so there has to be a more worked out concept. I need to present an argument. “I’m here to express the hidden inner anxiety the character is feeling?” “Hmm, ok, you can go ahead, but don’t get in the way!”

Can you give some insight into your creative process? Are you in lock step with script writing or are you handed a script, and what happens after that?

When it comes to songwriting, I love to be involved from the script writing process because that means I’m writing lyrics. Some shows I’ve done, like Drawn Together for Comedy Central, have fully handed me that task, but with others, there’s already a draft of the lyrics in the script that they want to keep or just punch up––a lot of SpongeBob is like that. It really depends on the production, or even the episode.

As for the writing itself, I try to be as direct and clear as possible without losing the sense of poetry good lyrics should have, and have both music and lyrics be rooted in character, concept or both. My heroes in this regard are the Sherman Brothers.

I do a lot of research too. Like recently I was tasked with writing a song about how friendship is like gravitational force (for Amazon’s Little Big Awesome). I do believe in the old rule ‘write what you know,’ and I knew I didn’t know near enough about gravitational theory.  I had to dive into the science books and really learn all that stuff before I could even figure out how I was going to approach it.

When it comes to scoring, over the years I’ve seen fewer and fewer scripts, as the process gets quicker and music is thought of more as a purely post-production process. Back when I did Mr. Show, I was at every table read and could get ideas before they started shooting. But, honestly, with scoring, I don’t mind not being involved from the script level. There have been times where I abandoned the idea I had based on the script once I saw a cut and the look of it, or the pacing, just didn’t jibe with what I had been thinking. So much can change between the script and the cut.  I like having my first impression of the whole project come from how it really looks and feels, and how the actors are approaching it.

Generally, my approach is, I suppose, kinda hippy-dippy, touchy feely. I watch the cut and it tells me what it wants. Not necessarily quickly, mind you. And, of course, that gets more complicated with temp music. I will have some ideas going in, and often have styles discussed ahead of time, but I like to let the pace of the cutting, the tone of the performances and the subtext point the way.

I joined BMI because I saw that the vast majority of my composing heroes were members. I figured hey, if John Williams and Jerry Goldsmith are with BMI, they must be doing something right. Having BMI has given me peace of mind that the music I have out there, swimming in the stream of commerce as it were, will be accounted for. That has impacted how I do deals, particularly for lower budget work, where “work for hire status” is realistically negotiable, and the prospect of retaining ownership and publishing is valid and can be mutually beneficial.

I’ve just started an indie remake of Nosferatu starring Doug Jones (The Shape of Water), and I’m crossing my fingers for more seasons of Stan Against Evil and Bobcat Goldthwait’s Misfits and Monsters. I also have some elaborate podcast episodes planned; we’ll see how long it takes to finish them.