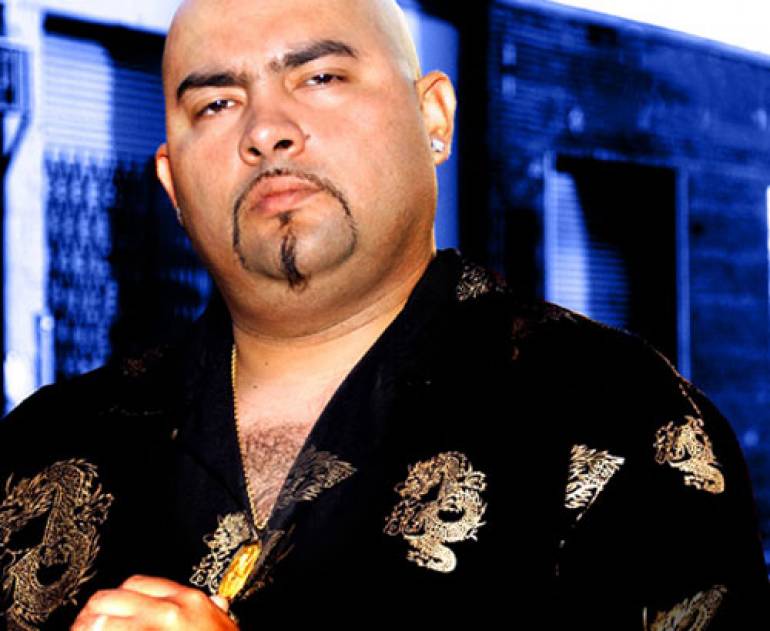 Hailing from South Central LA, David Rolas is a Mexican-American whose experience is similar to thousands of other young Latinos with Mexican parents (mother from Durango, father from Jalisco) who grow up absorbing several cultures: the Mexican at home and the American in school, while simultaneously absorbing a hybrid culture in the streets of the Angeleno metropolis in which the new urban sound of hip-hop was bred.

“While at home we listened to mariachi songs and ‘Banda’ tunes. In the street we heard, fed and drank hip-hop. In high school, I would get together with my ‘homies’ and we began to break-dance. At first we learned by watching other dancers perform, but many times we made up our own steps.”

After finishing high school, David focused his attention on his other interest: becoming a DJ. “At the time there was only one station in LA that would play hip-hop, so I listened to it religiously, to learn about what was popular. I would also go to parties, talk to rap groups, thus I started increasing my collection so I could be able to play the newest and the most underground jams,” he adds.

At the same time, David was studying to obtain his license as a radio DJ. He quickly landed an on-the-air stint at a popular local station and helped it become the most influential hip-hop station in Los Angeles.

Being part of the “Loose Crew” on Frank Lozano’s morning show, David pioneered the use of “freestyle” on the radio, by rapping spontaneously on the air, a then unknown concept on the radio waves. David’s visibility was such that he began to receive invitations to DJ at Los Angeles and Hollywood clubs. His skills behind the turntables made him one of the most sought-after DJs on the LA club scene.

Known as Dave Jams, he displayed an ability to work the crowds and hip-hop fans, regardless of their racial origin. As a Latino, he won over some hard-to-please African-American crowds. “In my beginnings as a DJ, a promoter hired me for a club whose clientele was mainly African-American. It was an interesting experience, since the crowd at the club was known to be very selective of its taste in music. They wanted 100% hip-hop, and they would see me, a Latino, they would stare, but when they started listening to the songs and my mix, they would accept me unconditionally.”

Thanks to his experience as a DJ, David met many key people inside the world of hip-hop. He befriended people like DJ Evil-E (Ice-T’s DJ), Mellow Man Ace, Kid Frost, Proper Two and The Mexicans, among others. During that time, he recorded some demo cuts, just for fun, with several MCs, among them the current members of Delinquent Habits.

Parallel to his DJ career, David belonged to various underground hip-hop groups like Brotherhood, who had a hit in the mid-90s called “Out of the Ashes.” “I liked belonging to a group, but I was very involved with my DJ gigs, so we would record mostly for fun. I didn’t have the time to commit 100% to a group and to being an MC,” says David. “But I was always writing poetry and songs.”

However, David’s luck was about to change, when some time later, he met up with an old friend, Byron Brizuela, producer and founder of Brizz Productions, known for his remixes for Juan Gabriel, Marco Antonio Solís, Paulina Rubio, Kumbia Kings among others and founder of the producing company ENS (El Nuevo Sonido or the New Sound). Byron and David had previously collaborated on several “rolas” (tracks) during the 90s.

Both David and Byron shared an affinity to record and perform hip-hop not only in Spanish, but also with an urban Latino flavor. Unfortunately, the record labels were not interested. “At that time, and we are speaking of barely a couple of years back, the labels saw Latino hip-hop as too risky. They told us ‘this is not going to sell’ but we knew that hip-hop combined with the Latino culture is part of the culture of this city.”

The union of David and Byron enticed them to create a new project called Nuestra Vida (Our Life), a groundbreaking album among the evolving urban regional genre.

Now David Rolas presents his sophomore release entitled Tatuajes (tattoos), an album that he describes as a reflection of his past, present and future.

Tatuajes closely follows a personal approach to his life painting a mosaic of his “struggle as an artist and as a person in the quest for survival in the game called life.”

This album continues to follow his signature style of urban regional music drenched in banda. Song highlights include “Un Poema,” a self portrait of the artist and “Cada Dia Mas,” a special song dedicated to his wife and his appreciation towards her unconditional support. On a lighter note, David Rolas also features party songs such as “Noche De Parranda” and “La Fiesta,” songs that speak of having a good time with friends and enjoying life.

David Rola’s musical quest lies in his pursuit for the purist incorporation of Latin and urban music. His hooks are catchy yet playful, creative, memorable and most importantly true to their respective roots. His flow is on point and his beats have enough energy and creativity to stand on their own.